A Solid Look at Sail Technologies

What happens to a solar sail as it flies through space? Made of the most diaphanous materials possible, the sail gradually begins to degrade. Roman Kezerashvili and Gregory Matloff (CUNY) have looked closely at problems like these and have considered everything from sail thickness and performance to the merits of different metallic films. The sail material of choice seems to be beryllium, three times lighter than aluminum, and with a usefully high melting point. One interesting configuration is a twin-walled, hydrogen-inflated sail with walls ten to twenty nanometers thick. But build such a craft carefully. If solar radiation causes the constituent beryllium to become degraded, the structural integrity of the sail is at risk and hydrogen begins to escape.

Solar sails need flight testing (and The Planetary Society’s plans for a solar sail seem to be developing nicely), but we’ll doubtless learn huge lessons from those early tests that will substantially revise our thinking. What happens, for example, when ultraviolet radiation ionizes the sail, creating a positive charge? The ionized sail then begins to deflect protons in the solar wind, increasing its speed. That sounds like a welcome effect, but too much electrostatic pressure carries the potential for rupturing a hollow-body sail. We need to experiment with these things in space as well as applying our best minds to the problem of deployment and performance.

Working Close to the Sun

It’s no surprise to the Centauri Dreams community that both Matloff and Kezerashvili have been actively at work on solar sail questions. We’ve examined many of Matloff’s papers and books in these pages, and Kezerashvili’s presentations at the summer confeence in Aosta, covering the effects of General Relativity on sail operations, were also discussed here. But how welcome to see them given publicity outside the space community. The colleagues made the cover of CUNY’s Salute to Scholars, a glossy publication for the university community featuring the two men, along with relativist and string theorist Justin F. Vázquez-Poritz and fiber-optics researcher Lufeng Leng. 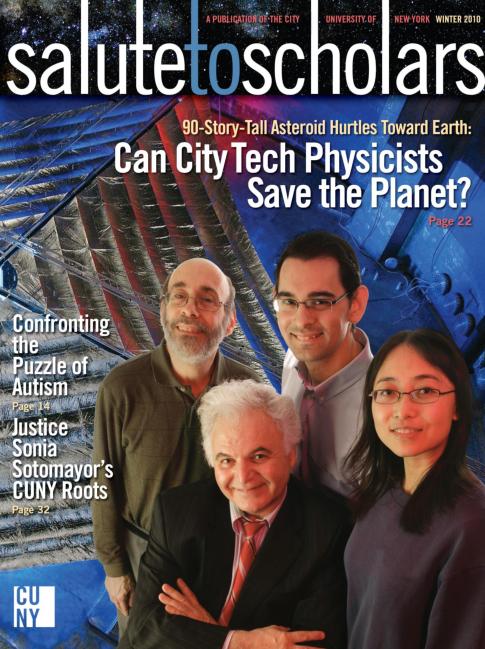 Vázquez-Poritz joined Kezerashvili at Aosta in examining sails from a unique perspective. Newtonian physics works fine for most current space operations, but things change dramatically when you start talking about bringing a solar sail in close to the Sun, as would occur in ‘sundiver’ mission concepts that seek to maximize the effect of solar photons and drive up the acceleration of the sail. Kezerashvili and Matloff calculate that a sail deployed at 0.5 AU could reach the heliopause in a mere 2 1/2 years — compare that to the thirty years the trip took the Voyager probes.

“You ask me why do I want to come so close to the sun with a solar sail?” says Kezerashvili. “I want to know what happens beyond the solar system, and if I launch something, I should know the result during my lifetime.”

Absolutely right, if we can find a way to do it, and a close solar pass seems to be the ticket, provided we can make the needed advances in materials science to withstand the environment. The article goes on:

He and Vázquez-Poritz considered Kepler’s third law, a mathematical formula conceived in the early 1600s that describes the relationship between the longer orbital periods of planets far from the sun and the shorter orbital periods of planets close to the sun. In two papers, they argue that deviations from Kepler’s law occur when the curvature of spacetime and solar radiation pressure act simultaneously on a solar sail-propelled satellite. In short, if you open the sail close to the sun and don’t account for Einstein, you might miss your target by more than 1 million miles.

“This could be an ideal way to test the effects of general relativity,” Vázquez-Poritz says. “With a solar sail, we could measure effects that otherwise would be too small to measure.”

Yes, and another way besides GPS to get the effects of General Relativity into an actual technological application.

As to Matloff, the CUNY article homes in on his work on deflecting potentially threatening asteroids like Apophis. Here’s one way to move an asteroid: Use a large, parabolic collector sail to reflect sunlight onto a smaller, ‘thruster’ sail that would concentrate a hot beam of light on the asteroid’s surface. Eventually you get vaporized rock and a controllable jet that can be used to nudge the asteroid onto a new path. Lufeng Leng’s work at CUNY’s photonics lab aims to build a mathematical model of how the process would work, beaming differently colored laser beams at meteorite samples.

A crucial question is how far the light penetrates below the surface, for a beam that penetrates too deeply will simply heat the asteroid, while a beam that penetrates just the right amount — perhaps a thousandth of a millimeter — would produce a steerable jet. It all depends on better understanding the penetration depth of electromagnetic radiation (like light) in NEO regolith.

The CUNY story goes on to discuss the matter with Robert B. Adams, who headed a NASA team that performed an asteroid deflection study in 2007:

“The solar collector is definitely on the table,” says Adams. So are ideas including a nuclear explosion away from the asteroid, a kinetic impactor that would ram into it and a gravity tractor, which would hover near the asteroid and use the gravity that naturally occurs between them to pull the asteroid slowly off its course.

“The solar sail hasn’t received as much attention, but it’s a good application with NEOs because it gives you more control over which way your thrust is generated,” Adams says.

Pushing Past the Heliosheath

Where does all this take us? A manned mission to a nearby asteroid seems a reachable goal, one that would deploy and test solar sail methodologies to provide data needed to achieve workable designs. That’s an insurance policy we need to have no matter which technology is ultimately deployed for any future deflection mission. Asteroids aside, the CUNY researchers are also showing us a realistic option for a sail mission into nearby interstellar space. Ponder a sail 1800 meters in diameter carrying a 150-kilogram scientific payload, capable of reaching the Oort Cloud in thirty years.

Writer Neill Rosenfeld’s work on this story is excellent. He covers not only the researchers’ ongoing studies but looks at the development of the sail concept in history and runs through asteroid deflection models ranging from sails to kinetic energy impactors and nuclear interceptors. We’re at that point in funding where we’re technologically ready to move sail work into space for shakedown and development, but funding constraints almost guarantee that sails like The Planetary Society’s LightSail and other private or commercial ventures will carry the concept forward.