What jumps out at the reader when examining yesterday’s exoplanet news is not so much that we’ve found as many as six low-mass planets, but that the two stars involved are both near twins of the Sun. Steven Vogt (UC-Santa Cruz) and Paul Butler (Carnegie Institution of Washington) led this work, and Vogt is quick to point out that two of the planets are ‘super-Earths,’ the first we’ve ever found around stars so similar to our own. Vogt notes this has implications for the broader hunt for planets that could sustain life:

“These detections indicate that low-mass planets are quite common around nearby stars. The discovery of potentially habitable nearby worlds may be just a few years away.”

A Bonanza Around 61 Virginis

And Sun-like they are, these stars. 61 Virginis, 28 light years from Earth, has long fascinated astrobiologists because it is more similar to the Sun than any of our nearest neighbors in terms of age, mass and other properties. Moreover, a separate team working with the Spitzer Space Telescope has discovered a thick ring of dust around 61 Vir at about 80 AU, twice the distance of Pluto from the Sun. No doubt we’re looking at the result of cometary collisions in the outer reaches of this interesting system.

61 Vir is now known, from this ground-based radial velocity work using data from the Keck Observatory as well as the Anglo-Australian Telescope, to host at least three planets, ranging in mass from five to 25 times that of Earth. And UC-Santa Cruz postdoc Eugenio Rivera notes that “Spitzer’s detection of cold dust orbiting 61 Vir indicates that there’s a real kinship between the Sun and 61 Vir.” Indeed, Rivera’s simulations on this system show that a habitable Earth-like world could readily exist in the region between the newly discovered planets and the outer dust disk. 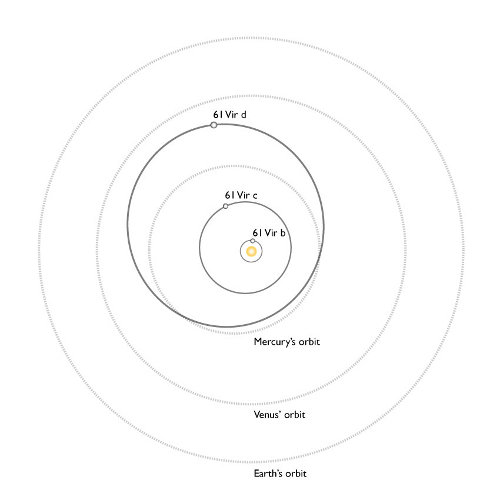 Image: A comparison of the orbits of the planets of 61 Vir with the inner planets in our Solar System. All three planets discovered to date in this system would lie inside the orbit of Venus. Credit: University of New South Wales/Carnegie Institution.

The second star in question is HD 1461, like 61 Vir a near twin of the Sun, some 76 light years away. We’ve found one definite planet there, a world of 7.5 Earth masses, although we lack the data to know whether this is a ‘super-Earth’ or something closer to Uranus or Neptune. Indications of two other planets are also present. Whatever the case, note the precision involved in this work. The inner 61 Vir planet, says Butler, produced a planetary signal that is among the two or three lowest-amplitude signals that have ever been identified. Butler goes on to make this remarkable observation:

We’ve found there is a tremendous advantage to be gained from combining data from the AAT and Keck telescopes, two world-class observatories, and it’s clear that we’ll have an excellent shot at identifying potentially habitable planets around the very nearest stars within just a few years.”

This is good news indeed, especially coupled with the growing belief that as many as half of nearby stars have detectable planets with masses less than or equal to Neptune’s. Ponder the fact that this is all being done with ground-based telescopes using the radial-velocity method. In this case, the team then matched their work with measurements from robotic telescopes in Arizona to ensure there was no brightness variability in either of the stars in question. The fact that there was not rules out patterns of dark spots on these stars that could have thrown the planetary findings into question.

You’ll want to read Greg Laughlin’s brief comment on the finds on his systemic site (Laughlin was a member of the UC-Santa Cruz team and a co-author of the two papers the work has produced). He notes that our ground-based observing techniques have now been refined to the point where Earth-mass objects around nearby stars are within reach:

“It’s come down to a neck-and-neck race as to whether the first potentially habitable planets will be detected from the ground or from space,” Laughlin said. “A few years ago, I’d have put my money on space-based detection methods, but now it really appears to be a toss-up. What is truly exciting about the current ground-based radial velocity detection method is that it is capable of locating the very closest potentially habitable planets.”

For newcomers here, I’ll also note that the Lick-Carnegie Exoplanet Survey Team has created an excellent tool available to the public that allows anyone so inclined to search for extrasolar planet signals by exploring real data sets. The Systemic Console is available through the systemic site.

A Jupiter in a Circular Orbit

But the good news doesn’t stop here. A Jupiter-mass planet has been discovered around the G5V star 23 Librae in a fourteen-year orbit similar to Jupiter’s ten-year period. This one is especially intriguing because it shows we’re beginning to be able to detect the signatures of solar systems that are much like our own. Hugh Jones (University of Hertfordshire) comments:

“Since Jupiter dominates the signal from our Solar System, we are now in a position to quantify how common planets like Jupiter are around stars like our Sun. Compared to the Solar System, most extrasolar systems look odd, with planets in very small or very elliptical orbits. In contrast, this new planet has an orbit that is both large, and nearly circular — for the first time we are beginning to see systems that resemble our own.”

This work is also a collaboration between the Anglo-Australian Telescope and the Keck Telescope, and the system they’re reporting on is an unusual one in other ways. A previously known giant planet has been discovered orbiting 23 Lib in an eccentric eight-month orbit. “This makes this yet another unexpected oddball – a system with a circular Jupiter-like planet, but with an interior planet in an eccentric orbit,” notes Rob Wittenmyer of the University of New South Wales.

The paper on the 23 Lib discovery is Jones et al., “A long-period planet orbiting a nearby Sun-like star,” submitted to Monthly Notices of the Royal Astronomical Society (preprint).