A ‘Super-Earth’ with an Atmosphere

Picking up on yesterday’s theme of planetary detections from ground-based observatories, we now get word of the detection of a transiting ‘super-Earth’ — one that may well have an atmosphere we can study — with the kind of equipment many amateurs already use to observe the sky. The new world is GJ 1214b, about 6.5 times as massive as the Earth, orbiting a small M-dwarf about a fifth the size of the Sun some forty light years from Earth.

But there’s more, a good deal more. At a distance of 1.3 million miles, the planet orbits its star every 38 hours, with an estimated temperature a little over 200 degrees Celsius. Because GJ 1214b transits the star, astronomers are able to measure its radius, which turns out to be 2.7 times that of Earth. The density derived from this suggests a composition of about three-fourths water and other ices and one-fourth rock. Some of the planet’s water should be in the form of exotic materials like Ice VII, a crystalline form of water that is found at pressures greater than 20,000 Earth atmospheres:

“Despite its hot temperature, this appears to be a waterworld,” said Zachory Berta, a graduate student at the Harvard-Smithsonian Center for Astrophysics (CfA) who first spotted the hint of the planet among the data. “It is much smaller, cooler, and more Earthlike than any other known exoplanet.”

That’s quite a find for the MEarth Project, which uses an array of eight 16-inch telescopes that monitor a list of 2000 red dwarf stars. The MEarth array is located at the top of Mount Hopkins, Arizona. MEarth looks for the tiny drop in brightness that indicates a transit, using data processing technologies to extract the planetary signature. If ever there was a find that should galvanize the amateur astronomy community, it’s this one, as David Charbonneau (CfA), who heads MEearth, is quick to note:

“Since we found the super-earth using a small ground-based telescope, this means that anyone else with a similar telescope and a good CCD camera can detect it too. Students around the world can now study this super-earth!” 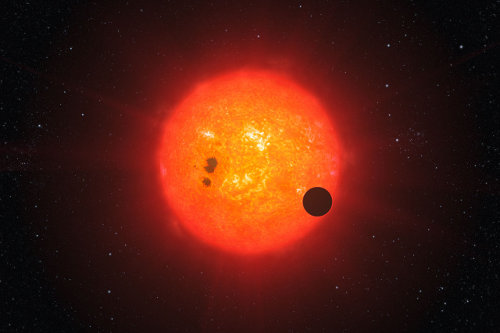 Image: This artist’s impression shows how the newly discovered super-Earth surrounding the nearby star GJ1214 may look. Discovered by the MEarth project and investigated further by the HARPS spectrograph on ESO’s 3.6-metre telescope at La Silla, GJ1214b is the second super-Earth exoplanet for which astronomers have determined the mass and radius, giving vital clues about its structure. It is also the first super-Earth around which an atmosphere has been found. Credit: ESO/L. Calçada.

But detecting the transit was only the first step in the process of collaboration between small telescopes and larger instrumentation. Confirming the MEarth find involved studying it with the HARPS spectrograph attached to the European Southern Observatory’s 3.6-meter telescope at La Silla. HARPS data were also crucial in determining the mass and radius of CoRoT-7b.

Sifting through this material, what stands out is that the radius measured for GJ 1214b is larger than expected by current models. Remember, this is the second time we’ve found a transiting super-Earth, the first being CoRoT-7b. The latter has a similar mass but the radius of GJ 1214b is much larger. Indications are that a surrounding atmosphere some 200 kilometers thick is adding to the drop in stellar light measured in these transits. Charbonneau again:

“This atmosphere is much thicker than that of the Earth, so the high pressure and absence of light would rule out life as we know it, but these conditions are still very interesting, as they could allow for some complex chemistry to take place.”

We should be able to learn more about this atmosphere, for GJ 1214b is close enough to Earth that the Hubble telescope should be able to characterize its atmosphere. The paper is Charbonneau et al., “A Super-Earth Transiting a Nearby Low-Mass Star,” Nature 462 (17 December 2009), pp. 891-894 (abstract).