The Hubble Space Telescope is capable of extraordinary things, but a 35th magnitude object is beyond its capabilities. In fact, 35th magnitude is 100 times dimmer than what the instrument can see directly. But an ingenious investigation using Hubble’s Fine Guidance Sensors (FGS) has turned up the smallest Kuiper Belt Object yet found. Not surprisingly, the method involves an occultation, in which the object discovered passed in front of a background star and revealed itself through the tiny signature of the event.

Imagine tracking down something that is only 975 meters across but almost seven billion kilometers from the Sun (a solid 45 AU). By comparison, the smallest Kuiper Belt Object previously seen in reflected light is about fifty times larger. Hilke Schlichting (Caltech) and team took advantage of 4.5 years of FGS data to make the find. The Fine Guidance Sensors provide navigational information to Hubble’s attitude control systems by looking at specific stars for pointing. And they’re good enough to pick up a brief occultation. 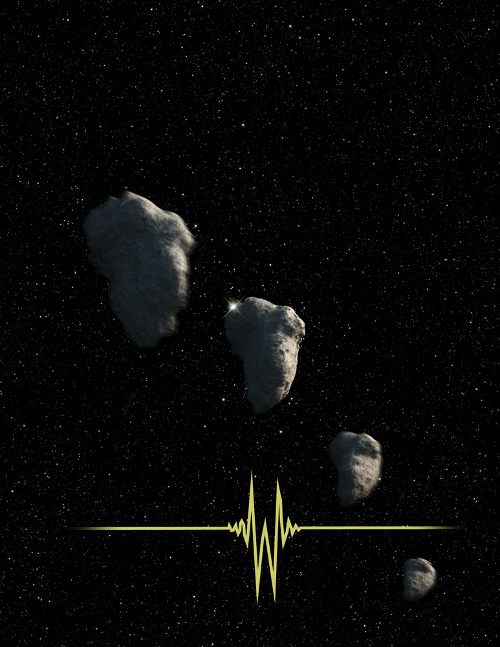 Image: This is an artist’s impression of a one-half-mile-diameter Kuiper Belt Object (KBO) that was detected by NASA’s Hubble Space Telescope. The icy relic from the early solar system is too small for Hubble to photograph. The object was detected when it passed in front of a background star, temporarily disrupting the starlight. Credit: NASA, ESA, and G. Bacon (STScI).

The find points to the value of archival data, reminding us that the discoveries we make upfront with many of our instruments are bulked up years later by painstaking analysis of vast datasets. In this case, Schlichting’s team analyzed FGS observations of 50,000 stars from some 12,000 hours of Hubble observing time along a strip of sky within twenty degrees of the ecliptic, where most KBOs are likely to be found.

Only one occultation, a 0.3-second event, came out of this work, but it was enough to tease out the tiny KBO. The duration of the occultation made it possible to estimate the distance of the object, while the amount of dimming offered up a rough calculation of its size. As we have much more FGS data covering the full range of Hubble’s operations since its 1990 launch, the possibility of finding more KBOs will keep the project going.

And what can this KBO tell us? We’re seeing that the Kuiper Belt is most likely in a state of ‘collisional evolution,’ with debris colliding over the course of the Solar System’s existence to grind KBOs into ever smaller pieces. That’s deduced by the presence of only one occultation in these data, which indicates there are fewer sub-kilometer sized KBOs than would be expected from the population of larger KBOs with radii exceeding 50 kilometers. As we are learning with debris disks around other stars, continuing collisions would produce this result.

Note, too, the relevance of this story to our recent discussion of using Kepler or similar space missions to detect Oort Cloud objects. Here again the occultation of background stars and the application of statistical analysis to the data is the method that fleshes out our view of the outer system.

It’s no surprise, then, to see that one of the co-authors of the paper on this work is Caltech’s Eran Ofek, who along with Ehud Nakar advanced the idea of looking for Oort Cloud occultations. The paper is Schlichting et al., “A single sub-kilometre Kuiper belt object from a stellar occultation in archival data,” Nature 462 (17 December 2009), pp. 895-897 (abstract).