What a welcome event the release of James Cameron’s new film Avatar must be for scientists working on the question of exomoons — satellites orbiting extrasolar planets. Imagine being a Lisa Kaltenegger (CfA) or David Kipping (University College London), hard at work exploring exomoon detection and possible habitability when a blockbuster film is released that posits a habitable moon around a gas giant. The film’s exomoon, called Pandora, fits a scenario that exomoon hunters tell us could exist, orbiting a giant planet in the habitable zone of its star, and it draws public attention as never before to exoplanet and exomoon detections. 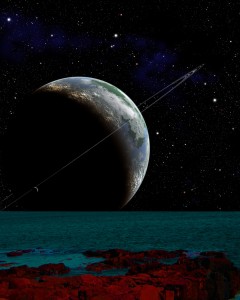 Interesting exomoon scenarios beyond gas giants are also possible, as this image shows. We’re learning that we can detect exomoons using tools like transit time duration measurements, and there are other methods, too, like microlensing and distortions of the Rossiter-McLaughlin effect. A paper from Kipping that we examined here recently makes the case that a Kepler-like instrument could detect exomoons around gas giants in the habitable zone down to 0.2 Earth masses — that would yield 25,000 stars, for example, in Kepler’s field of view that could undergo screening for such moons.

Image: This artist’s conception shows a hypothetical ringed super-Earth as viewed from one of its moons. Both super-Earth and moon are habitable and contain liquid water. Credit: David A. Aguilar, CfA.

What Lisa Kaltenegger asks in her new paper is whether we could make any definitive statements about the habitability of such worlds. And it turns out the answer is yes, assuming we’re using the right equipment (a 6.5-meter instrument, like the James Webb Space Telescope, would be required). And assuming that the exomoon in question is close to maximum separation, in which case an exomoon transit across its star (as seen from Earth) is comparable to the transit of a planet of the same size, provided that the projected semimajor axis is larger than the stellar radius. The transits of planet and exomoon, in other words, need to be separate events so that we can make the necessary measurements to characterize the exomoon.

Habitable-zone exomoons may be detected in the near future with missions like Kepler and could be orbiting their planet at a distance that allows for spatially separate transit events. In that case transmission spectroscopy of Earth-like exomoons is a unique potential tool to screen them for habitability in the near future. Spatially separating the exomoons from their parent planet improves their detectability because their absorption signature are about two orders of magnitude lower than the absorption features of an EGP [extrasolar giant planet] spectra.

We learn here that low-mass M-class dwarfs are the easiest stars to work with because of the favorable contrast of star to planet. In fact, Kaltenegger’s work shows that in the best case scenario, atmospheric H20, CO2 and O3 features in the infrared could be detected in one year for transiting habitable exomoons around M5 to M9 stars at a distance of up to 10 parsecs. Note that nearby M-dwarfs are ideal for this investigation because their habitable zones are close to the star, increasing transit probability and transit frequency.

M-dwarf exomoons have another advantage in the issue of habitability. We’ve long debated whether a planet in the habitable zone of such a star would be capable of hosting life considering that it would probably be tidally locked to its star, one side constantly baked by sunlight, the other in constant darkness. Whatever the answer (and tidal lock may not be a show-stopper for life on such worlds), an exomoon around a gas giant in this scenario, says Kaltenegger, would be tidally locked not to the star but to the planet, and would therefore have regular night-day cycles, just like Earth.

Cameron’s film depicts a habitable exomoon in the Alpha Centauri system, specifically around Centauri A. If such a moon were to exist around Centauri A, a 6.5-meter instrument like the JWST would indeed be able to characterize it, and quickly. Kaltenegger notes:

“You would only need a handful of transits to find water, oxygen, carbon dioxide, and methane on an Earth-like moon such as Pandora.”

In fact, under idealized observing conditions, a single transit observation of an Earth-like body around Centauri A would potentially allow screening for habitability. We know from earlier work that gas giants are unlikely around Centauri A or B — we would have probably found them by now — but we can’t rule out Earth-class planets. The person to turn to on such matters is Debra Fischer (Yale), whose ongoing work examining the Centauri stars for planets may soon yield answers to such questions. Fischer was recently quoted in Popular Mechanics in an article discussing the accuracy of the Avatar movie. Here’s a snippet from the article discussing Fischer’s radial-velocity work at the Cerro Tololo Inter-American Observatory (CTIO) in Chile.

This “wobble technique” has already ruled out the presence of Jupiter- or Saturn-scale exoplanets (like Polyphemus) around the Alpha Centauri stars. But “there’s a very good chance,” Fischer says, that planets with masses near that of Earth’s could grace this star system. “There’s still so much we don’t understand about planet formation around single stars,” Fischer says — let alone triple-star systems like Alpha Centauri. So in terms of what may be out there, “it’s almost an open slate.”

For the case of a system within 10pc and a 0.2 M⊕ habitable exomoon, we predict that molecular species could be found using transmission spectroscopy with JWST after the binning of ∼30 transit events.