With much of the US east coast to the north of me digging out from the recent storm, I can only think how fortunate I am not to be trying to travel right now. The snow-clogged airports and snarled streets that are all over the news do have their effect on my thinking, though, which may be why I was reminded this morning of a much colder place, a certain Saturnian moon whose most recent image now offers yet more proof of the active hydrology going on there. Titan got a bit lost in the shuffle here late last week but I don’t want to ignore this compelling new image.

What we’re looking at is the flash of sunlight reflecting off one of Titan’s lakes. It’s not a huge surprise, given that we’ve identified lake-shaped basins that ought to have been ideal for liquid methane. But now that the Sun is directly illuminating the northern lakes as spring breaks out on that part of Titan, we can take advantage of conditions there to see things like this, taken with Cassini’s visual and infrared mapping spectrometer. It’s another confirmation that liquid exists in those basins. 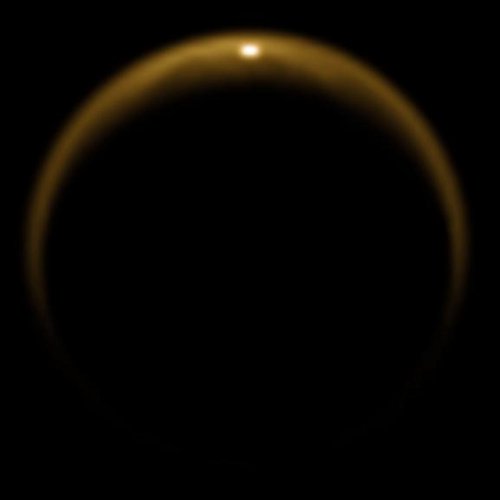 Image: This image shows the first flash of sunlight reflected off a lake on Saturn’s moon Titan. The glint off a mirror-like surface is known as a specular reflection. This kind of glint was detected by the visual and infrared mapping spectrometer (VIMS) on NASA’s Cassini spacecraft on July 8, 2009. It confirmed the presence of liquid in the moon’s northern hemisphere, where lakes are more numerous and larger than those in the southern hemisphere. Scientists using VIMS had confirmed the presence of liquid in Ontario Lacus, the largest lake in the southern hemisphere, in 2008. Credit: NASA/JPL/University of Arizona/DLR.

Bob Pappalardo, a Cassini project scientist based at JPL, conveys the power of the scene:

“This one image communicates so much about Titan — thick atmosphere, surface lakes and an otherworldliness. It’s an unsettling combination of strangeness yet similarity to Earth. This picture is one of Cassini’s iconic images.”

Iconic is right, and I suspect we’ll be seeing this image over and over again in future accounts of Cassini’s discoveries. While we had already identified liquid in Ontario Lacus, this specular reflection gives us a scene that is in some ways foreign, in other ways familiar. Katrin Stephan (DLR, Berlin), a member of Cassini’s visual and infrared mapping spectrometer team, recalls seeing the glint last July:

“I was instantly excited because the glint reminded me of an image of our own planet taken from orbit around Earth, showing a reflection of sunlight on an ocean. But we also had to do more work to make sure the glint we were seeing wasn’t lightning or an erupting volcano.”

That involved correlating the reflection with Titan’s geography, confirming that the glint came from the southern shoreline of Kraken Mare, which covers some 400,000 kilometers of the moon’s surface, an area larger than the Caspian Sea. The ongoing hydrological cycle brings liquid methane to the surface and shapes that surface just as water shapes the Earth.

The Titan ‘glint’ also reminds me of the work of Darren Williams (Penn State Erie) and Eric Gaidos (University of Hawaii), who have addressed the question of whether space-based instrumentation like a TPF-class telescope could pick up the glint of a ocean on a distant exoplanet. Let me quote again from one of the team’s papers: “…of all the extremely difficult measurements astronomers hope to make with a TPF-class telescope, time-series photometry and polarimetry that can lead to the identification of specular reflection from surface water might be the easiest.”

Maybe the Titan scene above is just the forerunner for an even more exotic detection down the road as we add to our space-based resources. The paper on that work is Williams and Gaidos, “Detecting the Glint of Starlight on the Oceans of Distant Planets,” Icarus Vol. 195, Issue 2 (June, 2008), pp. 927-937 (available in preprint form online). And consider an even more intriguing possibility, discussed a few years back by Peter McCullough (Space Telescope Science Institute) in a paper of his own:

…we propose to exploit the linear polarization generated by Rayleigh scattering in the planet’s atmosphere and specular reﬂection (glint) from its ocean to study Earth-like extrasolar planets. In principle we can map the extrasolar planet’s continental boundaries by observing the glint from its oceans periodically varying as the rotation of the planet alternately places continents or water at the location on the sphere at which light from the star can be reﬂected specularly to Earth.

If mapping the continents on planets around other stars doesn’t rouse your interest, you may not be paying attention! Of course, we may need to set up an observatory on the Moon to make this happen. The McCullough paper is “Observations of Extrasolar Planets Enabled by a Return to the Moon,” in Astrophysics Enabled by the Return to the Moon, M. Livio, Ed., Cambridge University Press, in press (preprint).