Long-time Centauri Dreams readers will know that Larry Klaes is a frequent critic of the portrayal of science in movies, and in particular of the ways Hollywood looks at aliens and our interactions with them. Larry has again been to the cinema, this time to see the new James Cameron release Avatar. He brings back a rich description of the film along with numerous insights on its potential for reaching the public.

When the United States was preparing to send the first humans to Earth’s largest natural satellite in the 1960s with Project Apollo, there were numerous scientists of the day who protested this effort. They felt that knowledge and even surface material could be gathered from the Moon far more cheaply and efficiently with automated probes than with astronauts.

On a technical and pragmatic level, those scientists were essentially correct. But as with many things in human society, the primary reasons for the existence of Apollo were about politics and power, specifically in this case to show up America’s chief Cold War rival, the Soviet Union, in the vast arena of space. 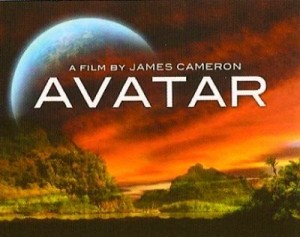 Most astronomers of the era eventually realized that if they wanted to learn a lot about the Moon and beyond, they had to jump on the relatively expensive and resource-intensive government-sponsored bandwagon or end up literally left behind in a cloud of smoke. Apollo may not have been the most efficient and productive way to reveal the ancient secrets of our nearest celestial neighbor, but it did work in the end.

This is how I have decided to approach the currently quite prominent existence of the new science fiction film Avatar by James Cameron in terms of educating the general public when it comes to the film’s themes of exobiology, exomoons, exoplanets, and human interaction on an interstellar scale.

Interstellar Ideas and the Public

Avatar is hardly the most efficient or inexpensive way to bring these major topics to a wide swath of society. However, just as the money, resources, and technology poured into Apollo brought hundreds of pounds of lunar rock and other invaluable space science data to Earth – as compared to the few ounces of lunar regolith retrieved by the three successful automated Soviet Luna craft during the 1970s – Cameron’s latest cinematic extravaganza will probably do more to make people aware and think about these literally universal ideas than dozens of books, articles, and documentaries on the same subject.

I and others may not agree with this, but the reality is that many people do get much of their “education” about the world and especially science from film and television, which is not obliged to be any more accurate and educational than it has to when their primary goal is to entertain in order to make a profit. So to dismiss Avatar out of hand because it may have a less than original plot and characters of limited depth is to dismiss as well a major opportunity to guide a public that may otherwise never bother to contemplate and confront the issues raised in this film.

Astronomers have detected over 400 alien worlds since 1995. Every day we come closer to finding the first Earth-type exoplanets and the first exomoons. When this happens, many consider it a given that various space agencies will begin to make serious efforts to reach those distant places in the galaxy, first to study them and then to send humans there in person to colonize. Just as other influential films have actually played a role in inspiring or deterring people from grand efforts, Avatar will probably be cited as either one of the catalysts for launching humanity to the stars or holding us back out of fear from alien unknowns or what we might do to others unlike us.

Let me first get some of the standard comments about Avatar out of the way: Yes, it is an impressive experience in terms of the 3-D effects making you feel like you are part of the film rather than the usual gimmick of objects flying at your face because they can. The effects do help to enhance the feel of being there in an alien place and in that respect Avatar is a cinematic landmark – assuming others have the means and the interest to follow in Cameron’s technological footsteps.

Many have compared the plot in Avatar to the great 1991 film Dances With Wolves and the 1995 Disney animated film Pocahontas. I would say that Avatar even more closely resembles a 1992 Australian animated film titled FernGully: The Last Rainforest, which has a plot about a human who is part of a major deforestation effort brought into the world of fairies who live in the forest and fear the destruction of their home. The deforestation is being conducted by giant yellow tree-cutting machines reminiscent of the ones tearing down the flora in Avatar. Personally I am ultimately more interested in the themes behind Avatar and its predecessors rather than who copied from whom, more of which will be discussed later.

The realm of Avatar is the moon Pandora, which circles a gas giant world named Polyphemus that in turn orbits the star Alpha Centauri A, among the closest of suns to Earth at just 4.3 light years, or about 25 trillion miles. Though in reality Jupiter-type exoplanets have not been detected in the Alpha Centauri system, which implies that such bodies may not exist, Avatar does help to make its audiences aware of the concept of moons as places for life to form and evolve, since most of the exoplanets found so far are giant worlds, many of them larger than Jupiter.

Thoughts on the Setting

As we have seen with our own Jovian planets since the days of the twin Voyager space probes, gas giant worlds do have retinues of large and dynamic moons, some of which may be homes for simple organisms. There is no reason not to think that alien gas giants might have exotic companions as well, though whether they would be like the residents of Pandora is much too early to say.

On the subject of living on the moon of a gas giant planet: Note how huge Polyphemus looms in the skies of Pandora as we are witness to throughout the film. It is certainly a very awe-inspiring and aesthetically pleasing image, enhancing the alienness of the moon and its inhabitants. However, I would think that being so close to a gas giant would cause all sorts of geological turmoil, which in turn would greatly upset the balance of life on Pandora, perhaps even to keep it from becoming complex.

To use a real-world example, note how the closest of Jupiter’s four Galilean moons, Io, is constantly pulled and churned about by the great mass of Jupiter and its fellow Galileans to the point where the moon is constantly spewing colorful sulfur across its uncratered surface. Despite the intense nature of Io’s environment, some scientists have speculated that the very geological processes that make Io such a violent place could bring about and support some kind of life, though probably nothing as complex as the creatures on Cameron’s alien moon.

Putting aside whether or not a tropical rainforest type ecology could evolve on a moon being so close to a gas giant planet, I had to wonder why the alien intelligence on Pandora, the Na’vi, did not seem to focus much attention on such an incredible sight as the planet Polyphemus, which seems to take up most of the sky over Pandora. Now granted I know the Na’vi are aliens, but since they also bear more than a slight resemblance to aboriginal peoples on our planet, I am surprised they didn’t focus at least some of their culture on the great world hanging over their heads. 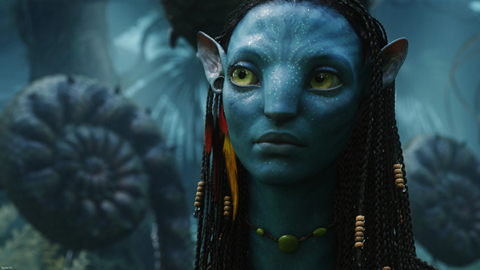 Perhaps they did and the film chose not to explore that aspect of Na’vi society, but I found it strange that something like that would be ignored or treated casually. Certainly many human societies on Earth going back to prehistoric times paid a great deal of attention to the objects and events in the sky, as they were often crucial to the survival of those societies. Again, maybe the Na’vi did and Cameron chose not to focus on it, or their very close ties to the ecology of Pandora kept them looking downwards.

Larry’s review continues tomorrow with a look at the broader issues raised by the film and what it may say about our own aspirations in space.