We continue Larry Klaes’ look at the James Cameron film Avatar, noting the technology with interest, but also examining the people involved and the always relevant question of how we deal with other cultures. How plausible are the creatures depicted in the film, and what sort of artistic choices forced Cameron’s hand? On a broader level, what sort of a future will humans make for themselves if and when they develop interstellar flight?

The starship that transported our hero, a Marine named Jake Sully, to Pandora made only a brief appearance at the beginning of the film. While nothing much was really said about this vessel, it did at least bear a resemblance to a craft that might actually operate in space at least during the next few centuries. This is in opposition to the starships of Star Trek and Star Wars, which often tend to be ‘sexy’, sleek to the point of being needlessly aerodynamic in the near vacuum of space. I do not recall the type of propulsion used by the starship in Avatar, but apparently it could attain high relativistic velocities, as the crew was in suspended animation for just over five years, which would be just about right for traveling from Earth to the Alpha Centauri system. Now whether we will have such a starcraft or any kind of manned starship by the year 2154 when the film takes place is another matter. 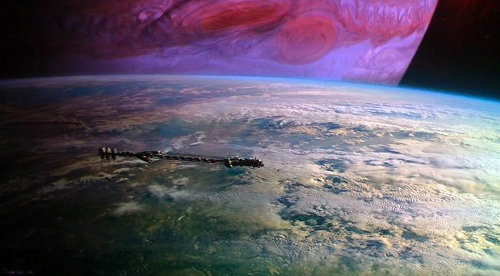 Now about the humans in Avatar: It seems that 150 years in the future people haven’t changed all that much, even though they do have some expectedly neat technology. But the people themselves don’t seem all that transformed by it, either physically or socially. This future society does have the means to repair major injuries, apparently – if the one injured can afford the care – and they do have the Avatar Program which allows people to place their minds in a genetically formed body of a Na’vi. But otherwise they seem to be a lot like us, which will probably remain true if we don’t do anything radical to ourselves over the next few centuries. Plus, just as with the aliens in Avatar, I realize the filmmakers didn’t want either party too different from their human audiences of 2009, for otherwise they would risk causing viewers to become unable to relate to the characters, even though ironically they have attended this film knowing they will be transported to what is supposed to be an alien world.

The Plausibility of Aliens

This brings up another point: Just how possible are the Na’vi and their environment? Will we find other alien intelligences who are even humanoids, to say nothing of having thought processes similar to ours? Or will evolving in similar environments bring about similar physiologies? Note how there are many different types of creatures in the oceans of Earth, but their liquid ecosystem brings about similar physical features across a wide spectrum. Perhaps we might expect to find similar looking organisms swimming in the global ocean of Jupiter’s icy moon Europa. I must admit, however, that once I got past the exoticness of being introduced to Pandora in 3-D, I was a bit disappointed at how familiar many creatures seemed, such as the animals the Na’vi rode: They bore more than a little resemblance to Earthly horses, just as those doglike creatures which attacked Jake early on resembled wolves or hyenas. I still have to wonder how anything complex could live on Pandora so long as that moon remains so close to its huge parent planet. By all rights the little moon should be suffering massive quakes and eruptions of lava, but I saw no evidence of such activity. 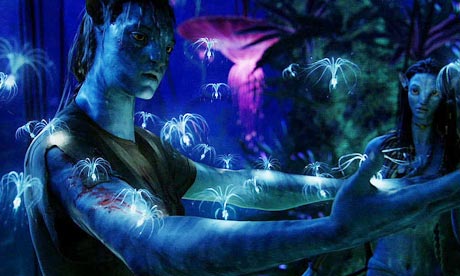 The ‘goddess’ Eywa, the complex biological organism every creature on Pandora seems to be a part of, had potential to be more interesting as a type of serious Gaia concept. However, much of the biology of Eywa was lost in the spiritual and New Age aspects the film emphasized. While it is certainly understandable that beings like the Na’vi might only see Eywa as a deity, I found it a shame that the concept and entity could not be further explored in a more scientific manner, but then I suppose that would turn Avatar into some kind of nature documentary, albeit fictional.

My next point is the motives for humans being on Pandora. While the need for resources and land and the removal of any group that happens to be occupying the place where those resources are by a stronger group is an unfortunate but age-old reality on this planet, how plausible will it be once our civilization expands into the galaxy?

I was disappointed that Cameron made it seem that most of humanity occupied one planet, the one it came from, when it was obvious that the society of 2154 was a spacefaring one. The presence of manned starships would presume a serious colonization of the Sol system, yet we are told that Earth (meaning human society) is in trouble if it doesn’t get its hands on a mineral called unobtanium, which costs ten million per kilogram. Well, that price is understandable if one needs to haul a precious mineral across 25 trillion miles of deep space! It also seems fairly ridiculous for a society that should be occupying much of an entire solar system, where there are plenty of planetoids and moons and certain planets whose resources can be exploited.

I know the whole premise of Avatar is to teach present humanity about taking care of Earth’s environment and respecting other species of all intelligence levels, but as both a long time space buff and science fiction fan, having Earth remain the focus of humanity to the point where if things go wrong there all of humanity is doomed while at the same time the race possesses the ability to explore and colonize other star systems seems incredibly narrow-minded to me. However, I have to keep in mind that Avatar is designed to appeal to a wide common denominator. Folks like me who nitpick may be acknowledged at best, but in the end the most relatable story rules the day. Again, this is why those who care about the public comprehending real science need to latch on to the themes in Avatar and utilize them to explain how certain things really work in our world.

Motives for the Great Voyage

So this leads us to the ultimate question: By the time we are ready to explore the stars and colonize alien worlds, will we actually do so? Will it be necessary to spread out into the galaxy? I think so, but I also have to wonder if the ones who do such actual interstellar exploring and colonizing will be very different from us, certainly much more different that the humans in Avatar. Will this mean that such encounters as depicted in the film will not happen, because the beings that do leave Earth will not be much like us, if at all? And the aliens we come across may not resemble much at all certain native peoples of our planet’s past and present.

The point that is often missed in plans for interstellar exploration and colonization is this: Whether we go into the galaxy with peaceful intentions or for reasons of empire, the odds seem good that the intelligent species out there may have serious difficulties in relating to us in any meaningful way, and we may have similar issues. Will it eventually lead to new understandings on certain levels, or will we ignore each other, or actually try to destroy one another either from fear or a lack of awareness of the intelligence of the other? 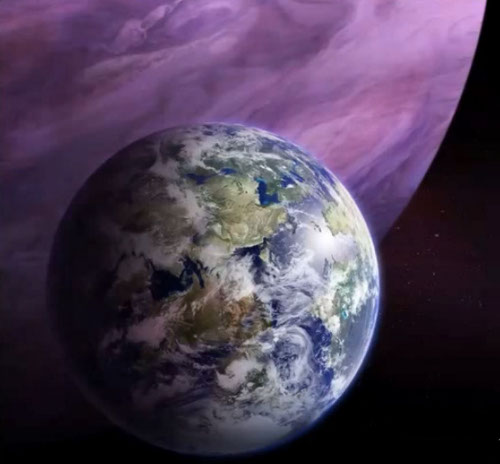 It will be very interesting to see what really takes us to the stars. We hope it will be for science and expanding humanity’s frontiers of knowledge, but just as with Apollo, science may have to hitch a ride with the plans of politicians and corporations which have other agendas than advancing human understanding. This may explain why we have yet to find others in the Milky Way galaxy, either nearby or far away.

One thing is certain: The Universe itself has its own agenda, consciously or otherwise. We may hope not to act as the company did in Avatar when it comes to other less advanced species, but at the same time we should consider the possibility that someone out there sees us as potential prey. Or random non-biological acts such as supernovae may threaten us with their arbitrary methods of destruction. We need to be ready as a society and a species to truly wake up to the fact that we live in a massively large Cosmos that perhaps has not destroyed us yet by the mere fact that we got lucky when it comes to rolling dice with reality. Hopefully one of the goals from our cosmic awareness is to respect other species no matter different they may be from us.

Avatar might just be another popcorn flick with more expensive special effects. Or perhaps it might be the film that inspires members of its audience to turn the dream of interstellar travel into reality. As with so many things in our existence, that choice is up to us.