With the American Astronomical Society meeting now wrapped up in Washington, we’re left to mull over the highlights, particularly the Kepler results. But the Keck Observatory also contributed compelling exoplanet news in the form of HD156668b, a planet some eighty light years from earth in the direction of Hercules. Working with Keck data, a research team led by Andrew Howard (University of California at Berkeley) has brought us a world that is only four times the mass of Earth, making this ‘super Earth’ the second smallest exoplanet yet discovered.

Addendum: See andy’s note below re planets smaller than this one. More on the ‘pulsar planets’ here.

Using the HIRES instrument (High Resolution Echelle Spectrograph) and the 10-meter Keck I telescope at Mauna Kea, the astronomers teased out the presence of the planet through radial velocity methods, which are responsible for the great majority of the planets thus far discovered. The trick is to work down to smaller and smaller worlds using these techniques, something that Howard is delighted to see occurring. Calling the discovery ‘remarkable,’ the astronomer went on to say that it “…shows we can push down and find smaller and smaller planets.” 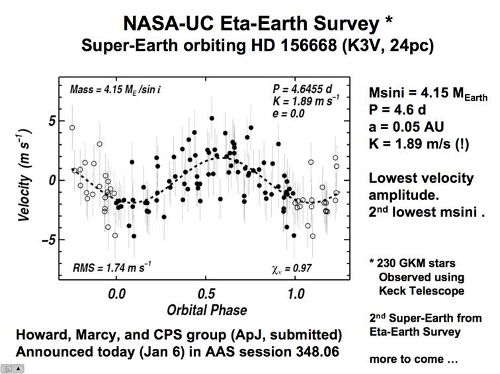 Image: This graphic shows the data confirming the existence of extrasolar planet HD 156668b as discovered using Keck/HIRES. The planet has a mass of roughly 4.15 Earth masses and is the second smallest exoplanet discovered to date.

HD156668b orbits its star every four days and is thought to have roughly twice the mass of the smallest known extrasolar world, Gliese 581 e. Geoff Marcy (UCB) is behind the Eta-Earth Survey for Low Mass Planets that explicitly targets super-Earths, and has thus far discovered two near Earth-mass worlds. We have Howard’s assurance that more are on the way. More in this Keck Observatory news release.