Glints of light off oceans or ice caps would be useful indeed as we try to figure out what we’re seeing on a distant terrestrial world. One day we’ll have the kind of instrumentation that can make direct observations of a planet like this, separating its light from that of its star. A ‘terrestrial planet finder’ mission that finds sun glints in its data would have identified a planet that could be suitable for life, one with large areas of water or ice.

Drake Deming (NASA GSFC) specializes in recognizing features like this in his work as deputy principal investigator for the Extrasolar Planet Observations and Characterization (EPOCH) study, a part of the extended mission of the Deep Impact spacecraft. EPOCH has produced two new videos showing bright flashes produced by sunlight as the Earth is seen to rotate from a distance of about eleven million miles. The idea is to produce a view of the Earth that can be studied in the same way a future planet-hunter spacecraft would study an exoplanet.

A tiny flash of light as a marker for life? It would hardly be proof, but such an event could be part of the constellation of confirming data involved in such a study. Deming has this to say on the subject:

“…these sun glints are important because, if we saw an extrasolar planet which had glints that popped up periodically, we would know that we were seeing lakes, oceans or other large bodies of liquid, such as water. And if we found large bodies of water on a distant planet, we would become much more optimistic about finding life.” 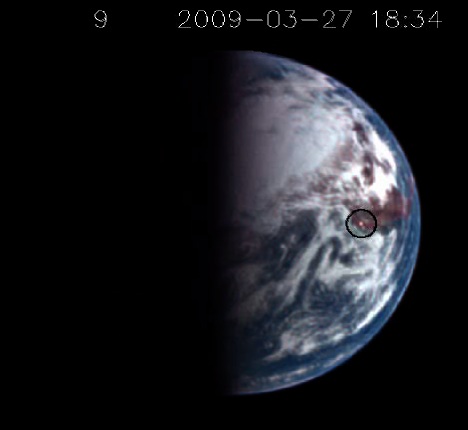 Image: A sun glint on Earth is captured (center of the black circle) in this image taken by NASA’s Deep Impact spacecraft as it looked at the north pole. The reddish area is North America, and the glint is coming from a body of water in California. Credit: Don Lindler, Sigma Space Corporation/GSFC.

Encouraging to planet hunters is the fact that the intensity of some glints was marked. Richard K. Barry at GSFC is leading the research into sun glints from the EPOCH results and creating a catalog that will relate each glint to a particular location on Earth. It’s clear from the EPOCH returns that sun glints appeared not only over calm areas of ocean but also over some land masses, surely caused by large inland lakes.

The videos EPOCH has provided are made from a compilation of green, blue and near-infrared images taken every fifteen minutes on a single day. Infrared is useful because it provides sharp contrast between land and water, with vegetation showing up better in the infrared than in visible light. That’s a useful fact not only for characterizing planets with water or ice, but also for looking at land masses, as Nicolas Cowan (University of Washington) explains:

“As Earth spins, different surface features rotate in and out of view, causing the color of the blue dot to change slightly from one hour to the next… [W]hen a large expanse of bare land, like the Sahara Desert, rotates into view, Earth gets a bit redder because continents reflect near infrared light relatively well.”

With over 400 extrasolar planets now identified, we have to consider the possibility that we’ll be inundated with terrestrial planet candidates as our observing tools improve. Narrowing down the field to those most likely to hold life will involve investigations like these, working with data from which sun glints can be extracted and, potentially, a rudimentary mapping of an exoplanet’s features could be begun, one that would at least point to the existence of oceans and continents.