Diamond Oceans on the Outer Planets?

What goes on under the clouds of Neptune and Uranus? A new paper reinforces the possibility that there are oceans of liquid diamond in such places, diamond seas with solid diamond icebergs. It’s a notion with a pedigree. I’m looking, for example, at a paper by David Stevenson (Caltech) from the Journal de Physique from November of 1984, where I find this:

There is clear evidence that many hydrocarbons decompose (or collapse) upon shock compression, probably into graphite and hydrogen. It is very important to establish the range of temperature and C:H ratios for which this decomposition can occur. It is equally important to establish whether an actual phase separation occurs (implying possible formation of a diamond or liquid metallic (?) carbon layer in Uranus and Neptune) or whether a collapsed but intimately mixed C-H structure results.

Stevenson’s work built on that of Marvin Ross, who suggested the possibility of diamonds in this environment in 1981. Researchers at the University of California at Berkeley demonstrated about ten years ago that the high temperatures and pressures found inside planets like these can turn methane into diamond, and in fact that the diamonds settling into Neptune’s core could account for the excess heat radiated by the planet. Now a team led by Jon Eggert (Lawrence Livermore National Laboratory) has explored the conditions under which diamonds melt, and has shown that, like water, liquid diamond when freezing and melting produces solid forms atop liquid ones. 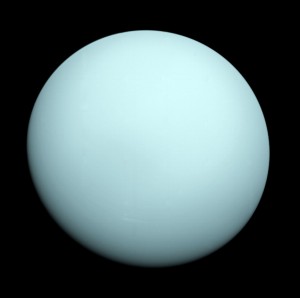 To melt diamond requires high pressures, which has made measuring its melting point extremely difficult. But the pressures found inside gas giants, and the high temperatures that go with them, should be enough to do the job. This Discovery News story notes that Eggert’s team subjected a small diamond (about a tenth of a carat) to a laser beam, liquifying the diamond at pressures some 40 million times greater than at sea level on Earth. As they then reduced the temperature and pressure, solid chunks of diamond began to appear at about 11 million times sea level pressure with a temperature of some 50,000 Kelvin.

Image: Voyager’s view of Uranus. Does an ocean of diamond lurk beneath these clouds? Credit: NASA/JPL.

The diamond chunks, like tiny icebergs, did not sink but floated. Eggert believes an ocean of liquid diamond could explain the fact that, unlike the relatively close match we find on Earth, the magnetic and geographical poles on Uranus and Neptune do not align, and can be offset by as much as 60 degrees from the north-south axis. Put an ocean of liquid diamond in just the right place and the magnetic field displacement makes more sense. We won’t know for sure without further study, but Eggert’s work makes the prospects of diamond oceans more plausible, reinvigorating what may be the most exotic scenario in the Solar System, one that could extend to other gas giants and even to the interiors of brown dwarfs.