New Light on the Outer System

Adding punch to the National Research Council’s recent report on detecting near-Earth objects is the first asteroid detection by WISE, the Wide-Field Infrared Survey Explorer. We’ve focused in these pages primarily on WISE’s ability to spot nearby brown dwarfs, but the mission is going to map the entire sky in infrared light and its discoveries should range from the inner system to distant galaxies. As an asteroid hunter, WISE is demonstrating it will be second to none, quickly spotting the object now designated 2010 AB78, a finding soon confirmed at visible light wavelengths at the University of Hawaii’s 2.2-meter instrument at Mauna Kea.

At 158 million kilometers from Earth, the asteroid, some 1 kilometer in diameter, poses no impact threat for the foreseeable future, but all asteroid and comet detections from WISE move nonetheless to the Minor Planet Center in Cambridge (MA) and follow-up observations then establish firm orbital data for newly discovered objects. The thinking is that WISE will find some 100,000 previously undetected asteroids in the main belt, in addition to hundreds of near-Earth objects.

“We are thrilled to have found our first new near-Earth object,” said Amy Mainzer (JPL), the principal investigator of NEOWISE, a program to mine the collected WISE data for new solar system objects. “Many programs are searching for near-Earth objects using visible light, but some asteroids are dark, like pavement, and don’t reflect a lot of sunlight. But like a parking lot, the dark objects heat up and emit infrared light that WISE can see.”

WISE gives us abundant new data, but it’s worth remembering that we’re still mining what Galileo and the two Voyager probes sent us from the outer Solar System. Data retrieval and management is going to be a huge issue as information continues to accumulate from our current missions. Scientists at the Southwest Research Institute (SwRI) are using both Galileo and Voyager data in their comparative study of the Galilean moons Ganymede and Callisto, two objects roughly similar in size and composition but strikingly different in physical appearance.

The model suggested by the SwRI researchers is that 3.8 billion years ago, in the era known as the Late Heavy Bombardment, the two moons diverged sharply in development. SwRI’s Amy Barr explains:

“Impacts during this period melted Ganymede so thoroughly and deeply that the heat could not be quickly removed. All of Ganymede’s rock sank to its center the same way that all the chocolate chips sink to the bottom of a melted carton of ice cream. Callisto received fewer impacts at lower velocities and avoided complete melting.” 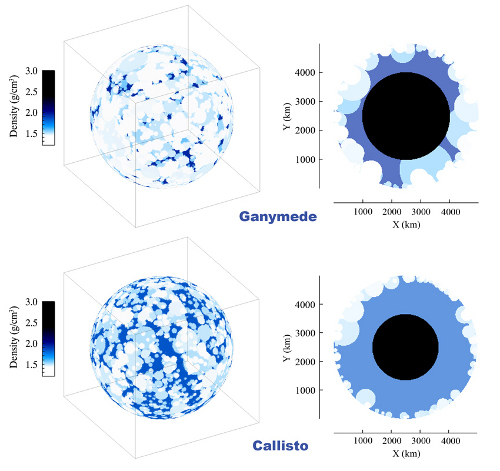 Image: Interior density structures created by an outer solar system late heavy bombardment onto Ganymede (top row) and Callisto (bottom row). The left column shows the density at the surface as a function of latitude and longitude, and the right column shows a slice through the center of the globe. Colors show the density, with black representing pure rock, blue representing mixed ice and rock, and white showing pure ice. Credit: SwRI.

Working with colleague Robin Canup, Barr sees Ganymede and Callisto as twins that, like the Earth and Venus, took sharply different directions. Because it was closer to Jupiter, Ganymede received twice as many cometary hits as Callisto, and was struck at higher average velocity. This allowed a self-sustaining core to form during the Late Heavy Bombardment on Ganymede but not Callisto. Here again we see the huge effect of impactors on planetary development, effects highlighted by the surface of our own Moon. Comparative planetology teases all this out of old data even as the flood of new information from WISE, Kepler, CoRoT and others continues to build.