Collision in the Asteroid Belt?

Collisions between asteroids should be highly energetic affairs, with an average impact speed of close to 5 kilometers per second. We may be looking at the debris of a head-on collision between two asteroids in imagery provided by the Hubble Space Telescope. The object in question, originally thought to have been a comet, is P/2010 A2, discovered by the Lincoln Near-Earth Asteroid Research (LINEAR) sky survey on January 6 of this year. The follow-up Hubble imagery dates from late January, and shows an unusual filamentary pattern near the nucleus. 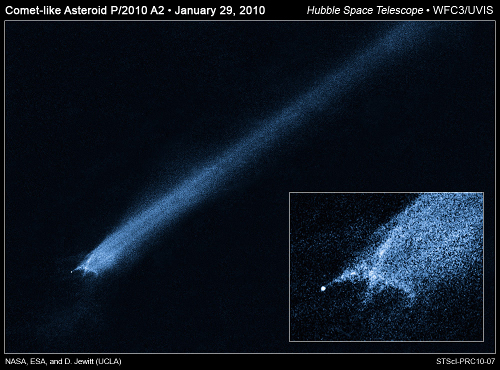 Image: HST picture of the comet-like object called P/2010 A2. The object appears so unusual in ground-based telescopic images that discretionary time on Hubble was used to take a close-up look. This picture, from the January 29 observation, shows a bizarre X-pattern of filamentary structures near the point-like nucleus of the object and trailing streamers of dust. The inset picture shows a complex structure that suggests the object is not a comet but instead the product of a head-on collision between two asteroids. Credit: NASA, ESA, and D. Jewitt (UCLA).

No asteroid collision has been observed before, but the idea that the asteroid belt is continuously ground down by collisions is well established. Indeed, natural impacts of this kind are thought to supply the zodiacal cloud in our Solar System with its dust. When the image was taken, the object was 300 million kilometers from the Sun and 140 million kilometers from Earth. Taken by Hubble’s Wide Field Camera 3, the black and white image was made in visible light but uses a blue color map to bring out details.

The assumption is that the filaments consist of dust and gravel thrown out of the 140-meter nucleus. Another intriguing fact: The main nucleus of P/2010 A2 lies outside its own halo of dust, a configuration never seen before in a comet-like object.

“This is quite different from the smooth dust envelopes of normal comets,” says principal investigator David Jewitt of the University of California at Los Angeles. “The filaments are made of dust and gravel, presumably recently thrown out of the nucleus. Some are swept back by radiation pressure from sunlight to create straight dust streaks. Embedded in the filaments are co-moving blobs of dust that likely originate from tiny unseen parent bodies.”

Astronomers believe the lack of gas in the spectra of this object is consistent with a collision. We don’t seem to be looking at ices from a parent cometary body turning into vapor, but rather a shower of debris pushed by the pressure of sunlight into a comet-like tail. If P/2010 A2 is indeed the result of an asteroid collision, its orbit is consistent with its being a member of the Flora asteroid family, which was itself produced by collisional shattering. In fact, according to this NASA news release, one fragment of the collision that produced the Flora family may have been the impactor that struck the Earth 65 million years ago, possibly the cause of the mass extinction of the dinosaurs.