A Boost for Exoplanet Atmosphere Studies

What JPL’s Mark Swain calls ‘an absolutely brilliant way to characterize super-Earths’ has emerged from work performed with a small NASA infrared telescope, one that has allowed scientists to identify an organic molecule in the atmosphere of a distant gas giant. HD 189733b is an old friend by now, the subject of intensive studies with space-based telescopes that have revealed water vapor, methane and carbon dioxide in its atmosphere. In the new work, Swain’s team made a spectrographic detection of carbon dioxide and methane using a ground-based instrument and a new method to remove the effects of tracking errors and the variability induced by changes in the Earth’s atmosphere. 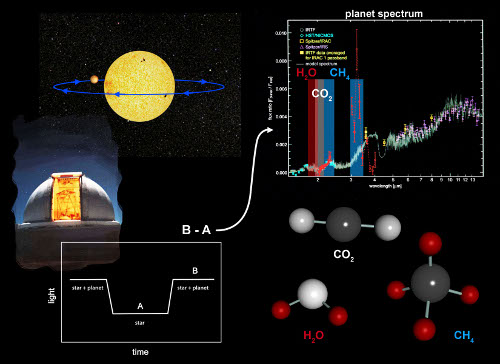 Image: To detect the chemicals in the atmospheres, astronomers measure light from the star system as its planet, which is lined up edge-on from our point of view, orbits around. The total light is measured (B in the chart at lower left), and then, when the planet disappears behind the star, the light of the star alone is measured (A). By subtracting A from B, you get light from just the planet. A breakdown of this light into its basic wavelength components is then plotted out to reveal the “fingerprints” of chemicals. These data, shown at upper right, are called a spectrum. The molecular drawings at lower right show the three molecules identified so far in the planet HD 189733b — water, carbon dioxide and methane. Credit: NASA/JPL-Caltech.

The gas giant in question orbits a K-class star in the constellation Vulpecula. And while the team didn’t tell us anything truly startling about HD 189733b, it was able to probe the emission spectrum between 2.0 and 2.4 μm as well as 3.1-4.1 μm, wavelengths where space-based telescopes lack capability. The result was the discovery of a bright infrared emission from methane on the day side of the planet that had not been anticipated.

In a paper in Nature, the authors speculate that activity in the planet’s upper atmosphere related to ultraviolet radiation from the parent star could be the cause of the emissions. But the team adds that more work is needed to be sure. While we await further studies, we can look forward to using the team’s new calibration techniques on larger ground-based instruments. Says Swain:

“The fact that we have used a relatively small, ground-based telescope is exciting because it implies that the largest telescopes on the ground, using this technique, may be able to characterize terrestrial exoplanet targets.”

Small indeed — the telescope is a 3-meter instrument located at NASA’s Infrared Telescope Facility at Mauna Kea, Hawaii that ranks 40th among ground-based telescopes. Couple the new methods with the continuing findings of our space-based observatories and the goal of studying the atmosphere of a planet that can support life seems just a little closer. Swain sees the technique being put to use in conjunction with the Hubble and Spitzer instruments and, eventually, the James Webb Space Telescope, to characterize the atmosphere of super-Earths, a category of planet whose numbers may swiftly grow via Kepler data.