New Evidence for Water on Enceladus 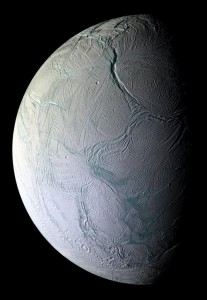 New measurements from Cassini, made on a flyby through the plume of Enceladus on March 12, 2008, bolster the case for liquid water in the Saturnian moon. Cassini found negatively charged water ions in the plume, and its plasma spectrometer also traced other kinds of negatively charged ions including hydrocarbons. That adds Enceladus to a fairly select list — the Earth, Titan and the comets — where negatively charged ions are known to exist in the Solar System. They’re found in Earth’s ionosphere, and also in places at the surface where liquid water is in motion, such as waterfalls.

Image: Is there liquid water beneath this surface? Portions of the tiger stripe fractures, or sulci, are visible along the terminator at lower right, surrounded by a circumpolar belt of mountains. The icy moon’s famed jets emanate from at least eight distinct source regions, which lie on or near the tiger stripes. However, in this view, the most prominent feature is Labtayt Sulci, the approximately one-kilometer (0.6 miles) deep northward-trending chasm located just above the center of the mosaic. Credit: NASA/JPL/Space Science Institute

We’ve been examining the case for water, and hence the possibility of life on Enceladus, for some time now. The latest results strengthen that prospect, according to Andrew Coates (University College London), lead author of the Icarus paper on the Cassini data:

“While it’s no surprise that there is water there, these short-lived ions are extra evidence for sub-surface water and where there’s water, carbon and energy, some of the major ingredients for life are present. The surprise for us was to look at the mass of these ions. There were several peaks in the spectrum, and when we analysed them we saw the effect of water molecules clustering together one after the other.”

A BBC story on the findings points out that Cassini has already detected sodium in the plumes of Enceladus, a signature typical of liquid water in contact with deep rock for extended periods of time. And what processes add extra electrons to water molecules? Coates believes the answer may be friction as water comes out of the jets, telling the BBC reporter it would be “like rubbing a balloon and sticking it on the ceiling.” Another possibility: The ambient plasma environment, which further Cassini passes will help us characterize more fully.

Cassini’s plasma spectrometer had previously found large negative hydrocarbon ions in flybys of Titan, with the largest being found at the lowest altitudes that Cassini flew, some 950 kilometers above the surface. Coates’ team suggested in December of 2009 that these large ions could be the source of the dense haze that screens Titan’s surface from view. This news release speculates that the large ions are the organic mix called ‘tholins’ that represent a prebiotic melange of chemicals that can be produced in gases known to be present on Titan.

The paper is Coates et al., “Negative ions in the Enceladus plume,” in press at Icarus (abstract). It’s interesting to see that this is yet another case of a scientific instrument being taken beyond its intended use to return key data. Cassini’s plasma spectrometer was designed to measure the density, flow velocity and temperature of ions and electrons around Saturn. Who among its design team could have imagined it would sample jets around a tiny moon whose evidence of subsurface water excites the interest of astrobiologists?