My interest in solar sail concepts goes back to the days of Cordwainer Smith’s “The Lady Who Sailed the Soul,” a science fiction tale (Galaxy, April 1960) whose evocative conjuring of a fantastic future has always stayed with me despite far more realistic sail concepts from the pen of Arthur C. Clarke and Poul Anderson, to name but a few. But magsails — craft that operate by creating a magnetic field that can interact with the solar wind — offer possibilities just as robust, provided we can tame the propulsive effects of that wind. And this may not be easy, given the changing speed and strength of this stream of charged particles outbound from the Sun.

Moving in some cases faster than 400 kilometers per second, the solar wind seems to offer a clear path to the outer system, but we know all too little about it. That’s why I always keep an eye on attempts to measure the solar wind, including the IBEX (Interstellar Boundary Explorer) mission that examines the interactions between the solar wind and the interstellar medium. Much closer to home is a new proposal by Mason Peck (Cornell University), whose work on modular spacecraft and self-assembly has been discussed previously in these pages. Now Peck is pondering tiny spacecraft to monitor the solar wind close to home. 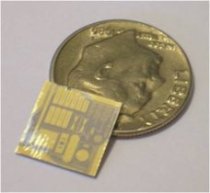 We’re talking about craft no more than 1-centimeter square, a 25-micrometer thick object that weighs less than 7.5 milligrams. This New Scientist article writes up Peck’s idea of putting a swarm of such ‘smart dust’ spacecraft at the Lagrangian point between the Earth and the Sun, where it could monitor solar wind strength and alert us to blasts of charged particles that could disrupt communications and other electronic systems here on Earth. Think of these solar wind sensors as tiny solar panels with a radio antenna. They could give us an extra thirteen minutes warning of a storm compared to NASA’s Advanced Composition Explorer. And they should give us a richer picture of the solar wind itself.

But ‘swarm’ spacecraft open up intriguing possibilities in other directions. They’re essentially micro solar sails that would be highly responsive to solar radiation. In fact, they’re much like dust, as Peck explains in a paper on the subject:

Dust in the solar system experiences a surprising lifecycle. Solar pressure and electrostatic forces can compete with gravity to give very small particles highly nontraditional orbits. Some dust finds a stable orbit; some dust gently lands on the surface of planets like our own, and some dust is energetically ejected from the solar system.

Dust particles vary in size from a few molecules to 100 μm and have a mass smaller than a few μg. At these mass scales, the acceleration due to what would be considered perturbation forces on larger bodies can no longer be neglected. In fact, we propose that they be harnessed and manipulated in order to enable new propulsion techniques and missions. Dust’s unique behavior motivates the present study of the orbital dynamics of extremely small bodies and the development of a spacecraft capable of exploiting on these physical principles.

Inspired by the orbital dynamics of dust, Peck and colleague Justin Atchison present their goal:

We propose to fabricate this dime-sized spacecraft on a single ultra-thin substrate of silicon. This choice reduces the total mass to fewer than 7.5 mg and makes the spacecraft bus itself a solar sail, yielding a lightness number β of 0.0175. This architecture can provide passive solar sail formations and various passive methods of changing orbital energy. We also consider augmenting this architecture with traditional CP1 sail material (β of 0.1095) to reduce transfer times further.

Peck uses the term ‘Microscale Infinite-Impulse (MII) spacecraft’ to describe objects like these, and a prowl around his Web contributions at Cornell reveals possible applications from the kind of solar wind reporting discussed here to swarm spacecraft that can perform in-orbit inspections of larger craft, or even a chain of craft that can push into the interstellar medium, reporting by relaying data back to Earth through each subsequent craft. Peck’s paper “A Passive Microscale Solar Sail,” AIAA SPACE 2008 Conference & Exposition, San Diego, CA, Sep 9-11, 2008, is the place to begin. It’s available online. Thanks to John Freeman for the pointer to the New Scientist story.