The Stardust spacecraft recently completed a course adjustment maneuver as it continues on its way to comet Tempel 1. The burn began at 2221 UTC on February 17 and lasted 22 minutes and 53 seconds. The net result: A change of the spacecraft’s speed by 24 meters per second. That may not sound like much, but it has big ramifications for this interesting mission. Tempel 1 is a rotating object, and mission scientists want to have a look at places previously imaged by the Deep Impact mission of 2005 (and yes, this is the first time we’ve revisited a comet). An adjustment to Stardust’s encounter time of eight hours and 20 minutes should maximize the chances of seeing the right surface features on the 2.99-kilometer wide potato-shaped mass.

The burn took place almost exactly a year before the spacecraft will reach Tempel 1. You may remember Stardust as the first spacecraft to collect cometary samples and return them to Earth for study. After the sample return capsule was retrieved in 2006, controllers changed the mission to Stardust-NExT (New Exploration of Tempel) and a four and a half year journey to Tempel 1 began. The spacecraft, meanwhile, is holding up quite well, according to project manager Tim Larson (JPL):

“We could not have asked for a better result from a burn with even a brand-new spacecraft. This bird has already logged one comet flyby, one Earth return of the first samples ever collected from deep space, over 4,000 days of flight and approximately 5.4 billion kilometers (3.4 billion miles) since launch.” 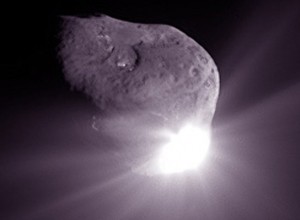 Stardust-NExT should be productive not only in providing high-resolution images of the comet’s surface, but in showing us any surface changes that have occurred between successive visits to the inner Solar System. Tempel 1 orbits the Sun every 5.5 years and was photographed spectacularly when the Deep Impact mission’s impactor drove a 200-meter crater some 30-50 meters deep into the object. That crater could not be imaged well by Deep Impact because of obscuring dust. Now we’ll see how that site looks today and learn more about how Jupiter family comets like Tempel 1 evolve.

Meanwhile, the European Space Agency has whittled down an extensive list of mission proposals to three survivors, which will now enter the definition phase, the step before any final decision is reached on implementation. Both Euclid, which will map galactic distributions to ferret out the underlying structure of dark matter and dark energy, and PLATO (PLAnetary Transits and Oscillations of stars) are of particular interest, with PLATO homing in on the frequency of planets around other stars, including terrestrial worlds. Like CoRoT, the transit-hunting PLATO would also be an astroseismological observatory, probing stellar interiors.

An assessment study prepared by EADS-Astrium on PLATO notes this distinction between it and earlier missions:

Both CoRoT and Kepler missions feature limitations in terms of minimum planet size, maximum orbital period, number of detected exoplanets and capability of further characterization of exoplanets and their host stars. PLATO will offer order of magnitude improvement of the science with respect to CoRoT and Kepler missions, filling the need for a further generation mission, observing more stars with increased magnitude and observing significantly smaller exoplanets, with significantly longer orbital periods.

Astrium and Thales Alenia Space ran parallel assessment studies on PLATO which were presented in December of last year. Both make for interesting reading. The Astrium study is linked above and the Thales study is here.

The third mission is Solar Orbiter, which would approach the Sun to within 62 solar radii. 52 proposals were narrowed down to six in 2008 and now pared down again, a reminder of how difficult it is to get a mission studied, approved, built and launched. Two out of the three missions are likely to be chosen for launch slots, but all three face budgetary challenges as they go through the definition phase, which will extend to mid-2011.