Enceladus Hotspots, and Memories of Orion

Although we’ve been preoccupied largely with theoretical matters this week, I don’t want it to close without reference to the new Cassini imagery of Enceladus. This shot was made at a phase angle of 145 degrees when Cassini was about 14,000 kilometers from Enceladus, during the flyby of November 21. The remarkable jets spraying from the fractured surface in the south polar region are clearly visible. 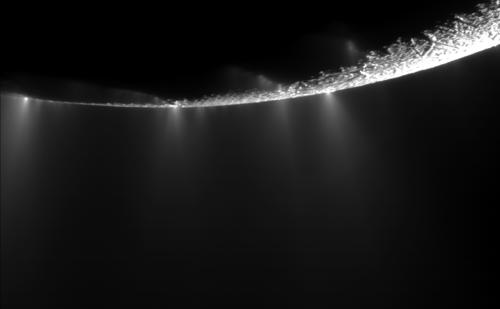 Image: Dramatic plumes, both large and small, spray water ice out from many locations along the famed “tiger stripes” near the south pole of Saturn’s moon Enceladus. The tiger stripes are fissures that spray icy particles, water vapor and organic compounds. More than 30 individual jets of different sizes can be seen in this image and more than 20 of them had not been identified before. At least one jet spouting prominently in previous images now appears less powerful. Credit: NASA/JPL/SSI.

I keep thinking about Project Orion, back in the crazy days before the Test Ban Treaty of 1963 closed down the nuclear option. The prospect of taking a huge vessel with a crew of 100 all the way to Saturn as early as 1968 was much in the air at Los Alamos, and Enceladus was to have been the ultimate destination, chosen because observations of the distant moon seemed to show plenty of ice on the surface. So gleefully did the Orion team ponder its propulsive capabilities that project leader Ted Taylor wanted to install a two-ton barber’s chair on the ship, a poke in the eye to chemical rocketry and all its limitations. The atomic spaceship was going to be big.

As to Enceladus, Dyson recalled:

“We knew very little about the satellites in those days. Enceladus looked particularly good. It was known to have a density of .618, so it clearly had to be made of ice plus hydrocarbons, really light things, which were what you need both for biology and for propellant, so you could imagine growing your vegetables there…”

The quote is from George Dyson’s Project Orion: The True Story of the Atomic Spaceship (New York: Henry Holt, 2002), and it always makes me wonder what Dyson and crew would have thought of Enceladus, with its extraordinary sprays of fine material showing geological activity and the possibility of liquid water, when they actually arrived. The new Cassini imagery shows us more jets than ever before, more than thirty individual geysers in one mosaic, with changes to previously seen jets that are telling:

“This last flyby confirms what we suspected,” said Carolyn Porco, imaging team lead based at the Space Science Institute in Boulder, Colo. “The vigor of individual jets can vary with time, and many jets, large and small, erupt all along the tiger stripes.”

The section of Baghdad Sulcus shown below combines heat data with visible-light images for a 40-kilometer stretch of this, the longest of the so-called ‘tiger stripes.’ Peak temperatures along Baghdad Sulcus reach 180 kelvin, perhaps as high as 200 kelvin, which the Cassini team believes is the result of heating by upwelling water vapor. This is an intense effect — the heat is confined to a narrow region about a kilometer wide along the fracture, and its strength varies along the length of the fissure. 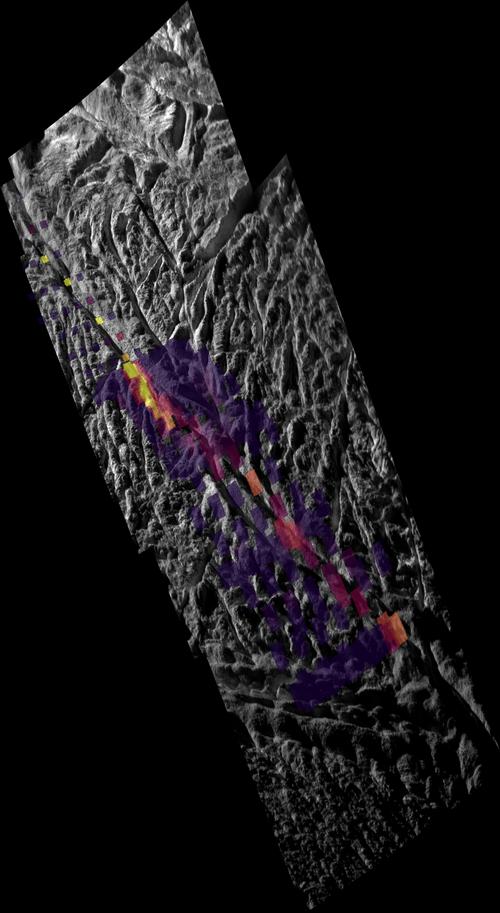 Image: A mosaic combining high-resolution data from the imaging science subsystem and composite infrared spectrometer aboard NASA’s Cassini spacecraft. Pockets of heat appear along one of the mysterious fractures in the south polar region of Saturn’s moon Enceladus. The fracture, named Baghdad Sulcus, is one of the so-called “tiger stripe” features that erupt with jets of water vapor and ice particles. It runs diagonally across the image. This mosaic, obtained on Nov. 21, 2009, shows a 40-kilometer (25-mile) segment of Baghdad Sulcus and illustrates the correlation between the geologically youthful surface fractures and anomalously warm temperatures recorded in the south polar region. It shows the highest-resolution data yet of the heat leaking from the moon’s interior along the tiger stripes.

While the heat appears to emanate mostly from the main Baghdad tiger stripe, some of the fractures branching off or parallel to it also appear warmer and active to varying degrees, though this needs to be confirmed by further analysis. The total amount of infrared energy and the relative amounts given off at different wavelengths show that the highest temperatures along Baghdad Sulcus are limited to a region no more than tens of meters (yards) across. Most of the heat measured by the infrared spectrometer probably arises from the warm flanks of the active fractures, rather than their central fissures. The narrow central fissure is probably even warmer than the 180 Kelvin (minus 140 degrees Fahrenheit) detected – possibly warm enough for liquid water in the fractures to be the source of the observed jets.

Carolyn Porco refers to Enceladus’ “organic-rich, liquid sub-surface environment” as “the most accessible extraterrestrial watery zone known in the Solar System.” The temperature differential between places like Baghdad Sulcus and the 50 kelvin reading of the surrounding surface is fascinating, and tells us that melting underground ice in these regions may not be all that difficult. Too bad we missed out on Orion’s 1968 journey, but the eight Cassini flybys thus far are telling us much about this unexpectedly interesting moon, surely the target of a future mission of its own.