Titan’s Sikun Labyrinthus is a an area of connected valleys and ridges that bears a certain similarity to features on Earth. The area appears analogous to what we call ‘karst topography,’ created on our planet when layers of bedrock are dissolved by water, to leave rock outcroppings and sinkholes. The Darai Hills of Papua New Guinea are an example, as are the White Canyon of Utah and the Cockpit Country of Jamaica. Liquid methane and ethane may be what is producing such landscapes on Titan, but the processes seem familiar indeed.

Which brings us to Mike Malaska, without whose insights we might not be talking about this. Malaska is an organic chemist out of Chapel Hill NC who approached Jani Radebaugh (Brigham Young University) about a potential collaboration regarding Titan. Malaska works with visualizing NASA data and shares his results with contributors on unmannedspaceflight.com, where amateur astronomers and space exploration enthusiasts regularly discuss the latest findings. The beauty of today’s world is that rich data sets become available to the public in short order, allowing for contributions from unexpected quarters.

It was Malaska’s work tracing out landscape patterns on his computer that led to the obvious question: If many of these valleys had no apparent outlets, where had the fluid that had shaped them gone? Closed valleys turn out to be typical of karst topography, as Malaska found when he examined imagery of places like Guangxi Province in China by studying imagery from Google Earth. This is top-notch work — Malaska used a color palette derived from Cassini’s imaging science subsystem as well as the descent imaging and spectral radiometer on the Huygens probe, which touched down on Titan’s surface.

The results are striking, as shown in the image below: 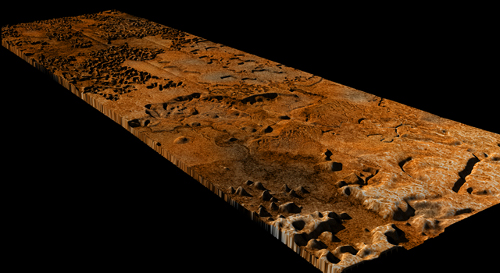 Image: This artistic interpretation of the Sikun Labyrinthus area on Saturn’s moon Titan is based on radar and imaging data from NASA’s Cassini spacecraft and the descent imaging and spectral radiometer on the European Space Agency’s Huygens probe. The relative elevations are speculative and organized around the assumption that fluids are flowing downhill. Image credit: NASA/JPL/ESA/SSI and M. Malaska/B. Jonsson.

Laying a radar image over an inferred topography allowed the researchers to construct a 3D map, shown in this JPL video. We see a landscape that does bear a bit of similarity to Utah, and puts me in mind of some of John Ford’s westerns, which were often shot amidst spectacular rock outcroppings in that state. Sikun Labyrinthus inescapably reminds us of our own world, as Cassini radar team associate Karl Mitchell (JPL) points out:

“Even though Titan is an alien world with much lower temperatures, we keep learning how many similarities there are to Earth. The karst-like landscape suggests there is a lot happening right now under the surface that we can’t see.”

Caves perhaps? It will be a while before we know. Meanwhile, what an example for amateur planetary scientists. Malaska met Radebaugh at last year’s Lunar and Planetary Science Conference and went on to push his fascination with Cassini’s Titan imagery to its logical limit. Just as amateur astronomers are now making serious contributions by measuring exoplanet transits, so the much closer to home task of in-system investigation has taken on a public dimension through widely distributed data.