Want to play around with some numbers? The process is irresistible, and we do it all the time when plugging values into the Drake equation, trying to find ways to estimate how many other civilizations might be out there. But a question that is a bit less complicated is how many terrestrial planets exist in the habitable zones of their stars? It’s a question recently addressed by Jianpo Guo (National Astronomical Observatories, Kunming, China) and colleagues via simulations. By ‘terrestrial’ world, the researchers refer to planets between one and ten Earth masses, although they note that some scientists would take this figure lower, to perhaps 0.3 Earth masses, which may be enough to retain an atmosphere over long geological timescales and to sustain tectonic activity. 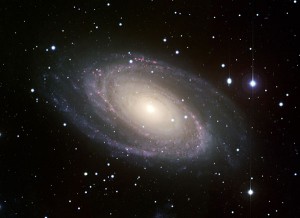 Image: M81. Our estimates of the habitable worlds in galaxies like these are widely variable, but they all imply countless chances for life to get its start. Credit: Jonathan Irwin, DSS2.

It’s interesting to weigh these numbers against the year-old estimates of exomoon hunter David Kipping (University College, London). Kipping starts with the galactic distribution of stellar types. He’s assuming about 300 billion stars in the Milky Way (increasingly cited as the best estimate) and noting that 90 percent of these are main sequence and thus stable for long periods of time. He goes on to whittle the number down, eliminating M-dwarfs because of tidal lock and also cutting out short-lived stars higher than F-class. 22.7 percent of main sequence stars in classes F, G and K thus remain.

Citing Michel Mayor’s Geneva team, which found that roughly 30 percent (give or take 10%) of F, G and K-class stars have super-Earth or Neptune-mass planets, Kipping narrows the field yet again:

Using 30% as a fixed value and assuming that very roughly half of this sample correspond to rocky planets and half to Neptune-like gas giants then we may write down that 15% of all F, G and K-type stars have rocky planets around them. It should be noted that this value is very likely an underestimate due to fact planets of Earth mass are currently below the detection threshold.

But how many of these planets would exist in the habitable zone? Kipping was working with 330 exoplanets then discovered, with about thirty in the habitable zone of their host star, and so he suggested a fraction of 10 percent would be a safe estimate based on current knowledge. He then factors in a galactic habitable zone, assuming that one may exist and that any value he obtains will therefore be an underestimate if it does not. This takes the number of stars with habitable planets down to 5 percent, but still leaves him with 50 million habitable-zone exoplanets in the Milky Way. We can contrast that with Alan Boss’s prediction of ten billion habitable exoplanets in our galaxy and, of course, with Guo’s team, whose whopping 45.5 billion is the largest estimate I’ve ever seen.

The weird thing, as Kipping confirmed this morning, is that his 50 million estimate was actually rounded up from 45.5 million, a figure exactly 1000 times less than Guo and team’s number. Our numbers, then, seem to be all over the map, and Kipping also notes Bond and Martin’s 1978 estimate of 10 million habitable exoplanets. But Kipping is the only one I know who takes a shot at the intriguing question of habitable moons. He is, after all, a specialist in detection methods for moons around exoplanets, studying methods that may help us detect large satellites during exoplanet transits. Noting that a large moon could be found around anything from an Earth-class planet to a gas giant, he boosts Mayor’s 30 percent figure to 50 percent, for any kind of planet. And this is interesting:

Let us also assume that the habitable zone for exomoons is extended by around 50% due to the possibility of tidal heating maintaining temperate conditions in traditionally cold-zones. This means that 15% of all planets can host a habitable exomoon.

How many planets have large moons? Kipping notes how little information we have, but using the Solar System as an example, he finds two planets out of eight where a moon has been formed through a capture/impact process, which he believes to be a requirement for a large moon. Assume, then, that 10 percent of planets host a large moon and you wind up with a figure of 25 million habitable exomoons in the Milky Way. But we have to keep these figures in context. Kipping again:

So our calculation suggests that there are roughly half the number of exomoons than exoplanets. One important thing to realize is that these calculations are based on many guesses but many of the assumptions underlying each calculation are the same. Whether the ratio is 0.5, 1, 2 or 5 is not very reliable right now, but what does seem perhaps more persuasive is that if we talk about ‘order of magnitude’ kind of figures, the number of habitable exoplanets and exomoons is ball-park equal.

Kipping’s figures are truly mind-blowing when he turns to the larger universe. A figure of roughly 100 million habitable environments per galaxy can now be turned around for an estimate of habitable worlds in the visible universe. The number works out to 1018, or 10 million trillion. Even allowing the vast play in the numbers between our low-ball and high-end estimates of habitable planets, the universe is likely to be filled with environments conducive to life. My guess is that it’s out there in fantastic abundance. But how much of it has gone on to sentience and, perhaps, technology? That’s the question SETI continues to poke at, and it’s one that’s emphatically still in play.

Next post: ‘Dark Flow’ Pushes Deeper into the Cosmos