Claire Moutou, one of an international team of astronomers behind the discovery of the planet CoRoT-9b, says the distant world will become a ‘Rosetta stone in exoplanet research.’ And perhaps it will, for this is a transiting gas giant, but not a ‘hot Jupiter.’ In an orbit not dissimilar to that of Mercury, CoRoT-9b transits its star every 95 days, each transit lasting about eight hours. We’ve identified approximately 70 planets by transit methods, but this one is ten times farther from its host star than most gas giants previously discovered by this technique.

We may be jumping the gun a bit to call the climate here ‘temperate,’ as this European Southern Observatory news release does, because temperatures here will depend on layers of highly reflective clouds that may or may not exist on CoRoT-9b. ESO cites temperatures between 160 degrees and minus twenty degrees Celsius beneath those assumed clouds, but we should be able to learn much more because of the lengthy transit periods. Didier Queloz, a co-author of the Nature paper announcing the find, sees it this way:

“Our analysis has provided more information on CoRoT-9B than for other exoplanets of the same type. It may open up a new field of research to understand the atmospheres of moderate- and low-temperature planets, and in particular a completely new window in our understanding of low-temperature chemistry.”

The planet is about eighty percent the mass of Jupiter and was identified by CoRoT after 145 days of observations in 2008, with follow-up observations confirming the find at the 3.6-meter ESO telescope at La Silla (Chile). Team member Tristan Guillot says that it is mostly hydrogen and helium, with as much as 20 Earth masses of other elements, including water and rock at high-temperatures and pressures. The host star is similar to the Sun and is located some 1500 light years away from Earth in the direction of the constellation Serpens.

…Corot-9b is the first transiting planet among those with longer periods that does not represent a case of extreme eccentricity with associated extreme temperature changes (e.g. HD80806b’s temperature is estimated to rise from ~800K to ~1,500K over a six-hour period near periastron). On the contrary, it is the first transiting planet whose general properties coincide with the largest known population of planets, those of longer periods and low- to-moderate eccentricities, but which previously were known only from RV surveys. Our results on Corot-9b show that these planets may be expected to be rather similar to the giants of our Solar System. 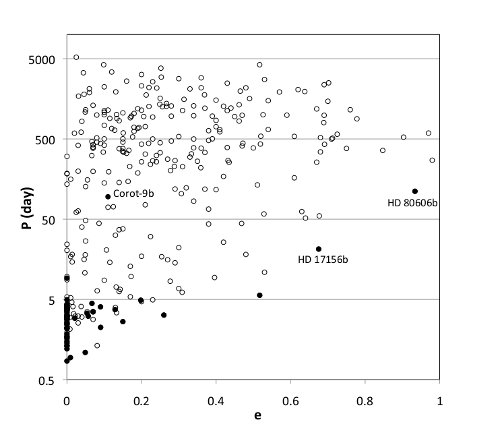 Image: The orbital parameters of CoRoT-9b among extrasolar planets. Shown is the eccentricity and period of all 339 exoplanets for which both values are known as of Nov 1, 2009. Solid dots are the 58 transiting planets among them – most of them have short periods of < ~5 days and zero or low eccentricities. Only two further transiting planets have orbital periods longer than 10 days; they are HD17156b with 21.2 and HD80806b with 111.4 days. However, both of them also have the highest eccentricity among planets of similar periods. Open dots are the remaining exoplanets, known only from radial velocity observations. Credit: www.exoplanet.eu/Deeg et al. So we have a transiting gas giant that is not a hot Jupiter, allowing us to study a category of 'temperate' gas giants in much greater depth now that we can apply both transit observations (revealing the planet's diameter) and radial velocity measurements, which can help us figure out its mass and hence its density. That should produce information that will illuminate the large number of temperate gas giants found thus far by non-transit methods. The paper is Deeg et al., "A Transiting Giant Planet with a Temperature Between 250 K and 430 K," Nature 464 (18 March 2010), pp. 384-387.