Making discoveries with new space missions always seems frustratingly slow, probably because with missions like Kepler, our expectations are so high. So it’s interesting to ponder what all is involved in getting the data analyzed and the discoveries pegged. This post from the Kepler team’s Charlie Sobeck points out that the first five planets Kepler found were the result of six weeks of flight data and about 25 days of ground-based observing to eliminate the false positives and determine the mass of the planets and properties of the host stars.

Nothing runs as smoothly as we might wish. The Kepler team had to sort through much of the data manually because the data processing software is not yet fully functional at NASA Ames. But word from the site is that a major software upgrade has finished development and can now be applied to analysis of almost a full year of data. It’s also worth noting that the Kepler mission is now being managed by Ames rather than the Jet Propulsion Laboratory. Getting past that kind of management transition has got to be a spur for new results.

Sobeck does note a problem with one of the spacecraft’s detector modules, which stopped working on January 9:

Under normal operations, each module and its electronics convert light into digital numbers. For the darkest parts of the image between stars, we expect these numbers to be very small (but not zero). Correspondingly, for the brightest stars in the image, much larger numbers are expected creating an image of each observed star and its background neighborhood. The numbers we see coming out of failed module 3 are all very similar in size and considerably lower than the normal levels. These numbers produce an image that looks like the “snow” on a television that has very bad reception. There are no stars visible in these images.

The problematic module is on the periphery of the field of view, and because the spacecraft rotates by 90 degrees every three months, the problem should not compromise the mission — the module observes a different part of the Kepler field of view each season. You can see the module’s position (and the spacecraft’s rotation) in the following image: 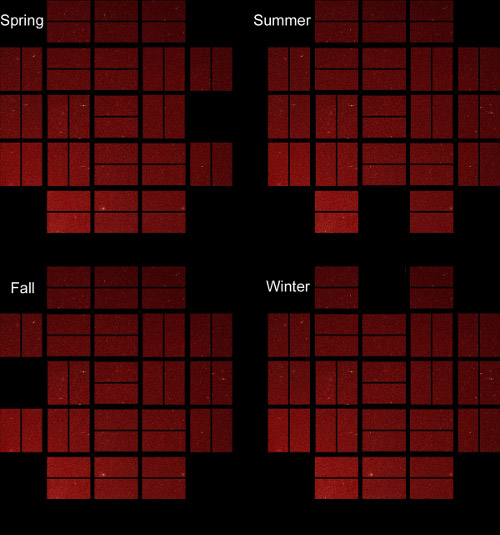 The module may be recoverable, but several weeks will go by before the team makes the attempt as the current situation is reviewed. But even in the worst case scenario of total module failure, Sobeck points out that no part of the Kepler field of view is rendered unobservable by the problem. At worst, the reduction in results might reach 5 percent, a figure, he adds, that “…shouldn’t significantly affect the Kepler science performance.”