Expect the Unexpected: Mimas and the LHC

I know I should be staggered by everything about the Large Hadron Collider, but frankly, what really has me jazzed this morning is that I’m writing this with a window on one side of my screen showing a live webcast from CERN and another in an upper corner showing a Saturnian moon. There is something truly science fictional at being able to follow ongoing events both here and in space from a PC fed by a worldwide dataflow, and what events they are. The LHC is emphatically in business. Following the successful collision of two 3.5 teraelectronvolt beams (1106 GMT), CERN director general Rolf Heuer said the obvious: “It’s a great day to be a particle physicist.”

Remarkable things will come out of the LHC, and it’s stunning to see the quality of data flowing out of CERN from events that are no more than an hour old, a tribute to the quality of the installation and the team behind it. I’m keeping a CERN window open on my (wide) screen, and the Twitter flow via #LHC is great fun — much jesting about the failure to produce black holes or time travelers, and one tweet (via @tiannwillemse) with this: “LHC destroys universe. News update: Backup universe seamlessly springs into existence. Calamity averted.”

Time will tell what new physics will eventually flow from the LHC. And what about the odd news from Mimas? New high-resolution imagery shows unusual patterns, among which is an unexpected hot region that, as shown in the image, looks for all the world like the iconic Pac-Man. Mimas, remember, is the moon with the enormous Herschel Crater, but we’re finding that it’s unusual in other ways as well, based on data from Cassini’s February 13 flyby. 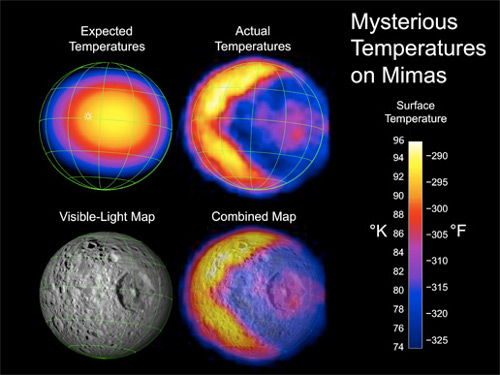 Image: This figure illustrates the unexpected and bizarre pattern of daytime temperatures found on Saturn’s small inner moon Mimas (396 kilometers, or 246 miles, in diameter). The data were obtained by the composite infrared spectrometer (CIRS) on NASA’s Cassini spacecraft during the spacecraft’s closest-ever look at Mimas on Feb. 13, 2010. Credit: NASA/JPL/GSFC/SWRI/SSI.

Why do we see such unusual temperature variations? Cassini’s composite infrared spectrometer shows that the warmest region of the moon is not found in early afternoon along the equator but in the morning, along one edge of the moon’s disc (hence the Pac-Man shape), where temperatures reach 92 K. Contrast that with the average 77 K on the rest of the moon, with a warm spot found around the Herschel Crater at 84 K.

No one has a quick answer on the odd V-shaped pattern, but theories are emerging:

“We suspect the temperatures are revealing differences in texture on the surface,” said John Spencer, a Cassini composite infrared spectrometer team member based at Southwest Research Institute in Boulder, Colo. “It’s maybe something like the difference between old, dense snow and freshly fallen powder.”

You would also assume that icy debris from Saturn’s E-ring would keep Mimas light in color, but what we see on the surface are dark streaks along crater walls and dark debris at the foot of each wall. The image below tells the story. One possibility is that Mimas accumulates silicate minerals or carbon-rich particles over time, possibly the result of impurities already embedded in surface ice. The darker material would be concentrated and left behind when the brighter ice evaporates. 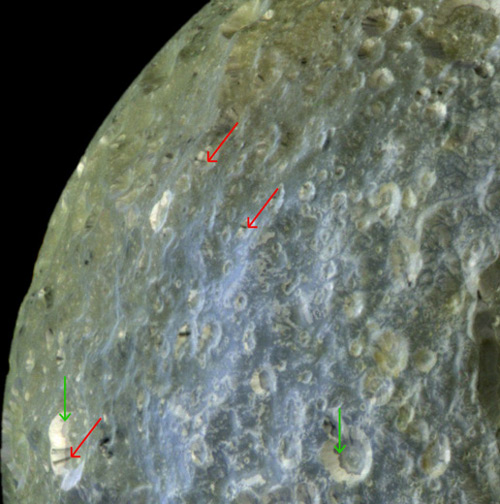 Image: This false-color view of Saturn’s moon Mimas from NASA’s Cassini spacecraft accentuates terrain-dependent color differences and shows dark streaks running down the sides of some of the craters on the region of the moon that leads in its orbit around Saturn. The image was taken during Cassini’s closest-ever flyby of the moon. The false-color image shows how colors vary across the moon’s surface, particularly the contrast between the bluish terrain on the right side of this view near Herschel Crater and greenish terrain elsewhere. The origin of the color differences (exaggerated by computer enhancement) is not yet understood, but may be caused by subtle differences in the surface composition between the two terrains. Credit: NASA/JPL/SSI.

Mimas has received little attention given the surprises we’ve found on Enceladus, but now we see that it has mysteries of its own. The larger lesson is that extending our reach into new areas invariably confounds older assumptions, as we have found in the exoplanet hunt from the discovery of the first pulsar planets on. Who knows what further surprises our own system holds (I’m looking at you, New Horizons), and who knows what fundamental insights we may gain as the work at CERN ramps up? Theories give us possibilities, but it’s the accumulation of raw data that tells the story.