The Exoplanets Rising conference, now in progress at the Kavli Institute for Theoretical Physics (UC Santa Barbara), is offering a treasure trove of online material, including one I’m currently watching, a presentation by Magali Deleuil (Astronomy Observatory of Marseilles Provence) on CoRoT results. It’s extraordinary for those of us who couldn’t be at the conference to have quick access to talks by the likes of Michel Mayor, Lisa Kaltenegger, Geoff Marcy and Debra Fischer on everything from transit puzzles to metallicity trends. 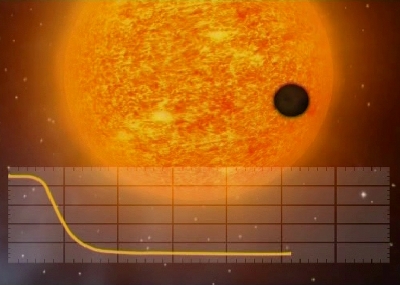 Interesting to note that CoRoT is now, according to Deleuil, at the end of the ‘nominal lifetime of the instrument,’ although CoRoT’s extended mission has been approved and the spacecraft will remain in operation until March of 2013. Deleuil says that thirteen observing runs have been completed, totaling 75,000 light curves from ‘stares’ of more than 60 days and 50,000 light curves from 25-day stares. Since February of 2007, 150 planetary candidates have emerged, fifty of which have transit depths of less than 3 milli-magnitudes (mmag).

Image: One of the methods for detecting exoplanets is to look for the drop in brightness they cause when they pass in front of their parent star. Such a celestial alignment is known as a planetary transit. Such transits block a tiny fraction of the light that COROT is able to detect. Credit: CNES.

The 3 mmag Deleuil mentioned in her talk works out to just 0.3 percent, a tribute to the sensitivity of the instrument in detecting smaller worlds. Just how sensitive is CoRoT? Deleuil says the instrument can detect Neptune-size planets no matter what the magnitude of the star, but a two Earth-radii planet requires stars brighter than 14th magnitude. Between Kepler and CoRoT we are going to build a useful catalog of ‘super Earths’ as we keep homing in on a true Earth twin.

I have a lot of listening ahead — David Charbonneau (Harvard CfA) is next on my list with an overview of transit discoveries, and I want to check Paul Kalas (UC Berkeley) on direct detection results. Chris Sotin (JPL) speaks this morning on ocean worlds and Lisa Kaltenegger (Harvard CfA) this afternoon on habitability and biosignatures. Abstracts and poster presentations are also available on the Kavli site, making it a real watering hole for those following the exoplanet hunt.

Previous post: Expect the Unexpected: Mimas and the LHC