Faces from Earth is an ambitious plan to send information about our species to the stars. We’ve done this before, in the form of the plaques mounted on the Pioneer spacecraft and the famous Golden Record of Voyager. What more can we do to ensure that future missions leaving Earth will carry such representation? Larry Klaes puts Faces from Earth in context by looking at how the idea of such messaging has developed and where we might go from here. This post originally appeared as an editorial on the SETI League site and is reprinted with permission.

For the vast majority of human existence, most members of our species rarely ventured beyond the borders of the places they were born and raised in their entire lives. For them, the whole world consisted of their family and their village. As for the other people in distant lands far away, they often had only a limited awareness of them, based mostly on stories told by visitors who had either been to these exotic realms themselves or knew someone who said they had journeyed there.

Then in the last several hundred years, our knowledge and technologies expanded tremendously. These events allowed us to both explore and understand not only the entire surface of our planet Earth and encounter the many human societies that live nearly everywhere upon it, but also to obtain a true grasp of the much vaster Universe beyond our globe.

Our species came to see that our world is neither at the center nor the bottom of existence, but just one of several planets circling an average star in a galaxy of 400 billion suns with worlds and possibly life of their own. In turn our galaxy, which we call the Milky Way, was realized to be one of perhaps 100 billion other stellar islands in the Universe, and some scientists theorize even that immense cosmic arena may have many companions or perhaps even an infinity of them.

Image: This image of Isaac Newton’s System of the World is one of the photographs included on the Voyager Record, now moving through the heliopause. Credit: NASA/JPL/Voyager Project.

When humanity began to venture in the direction of those numerous points of light in the night sky once we had grasped their true natures, first with telescopes and later with rockets and spaceships, we also pondered who or what might dwell in those faraway alien places and what their reactions might be towards us.

As is often the case when people are confronted with the unknown, wishful thinking, concerns, and fears take over their thinking processes. Alien have become everything in our culture from deities saving humanity from ourselves to monsters hell-bent on enslaving or destroying our species and our planet. 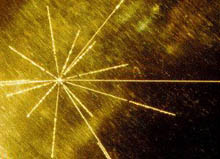 The truth is, in this fiftieth anniversary year of SETI, the Search for Extraterrestrial Intelligence, when astronomer Frank Drake began the modern SETI era by scanning two nearby stars in April of 1960 with a large radio telescope among the rural hills of West Virginia, we have yet to find any serious evidence for other intelligences or even life itself beyond Earth, despite a number of milestones which include the discovery of over 400 exoplanets since the last decade. Nevertheless, certain astronomers and others contend that the chances remain very good for the existence of other culturally and technologically sophisticated species throughout the galaxy.

Image: From the cover of the Voyager Golden Record. This picture has nothing to do with interpreting the disc contents, but rather is a pulsar map indicating the solar system from which the Voyager spacecraft originated. The cover of the Voyager record also contains an ultra-pure source of Uranium-238 to serve as a radioactive clock for determining the record’s age. This same pulsar map as well as hydrogen atom drawing were also included on the Pioneer 10 and 11 plaques. Each pulsar has its own distinct and rapid pulsing radio frequency that is very slowly changing with absolute linearity. Credit: NASA/Sylvain Kepler.

While various SETI projects run by both amateur and professional people continue to listen and look for other living minds in the Cosmos, a few have decided that with so many stellar systems to investigate, discovering who else is out there might be helped along if we deliberately made humanity’s presence known to the galaxy, thus METI, or Messaging to Extraterrestrial Intelligences.

The first deliberate METI efforts began in the 1970s. Among those initial projects were the golden plaques and records carried respectively aboard the space probes Pioneer 10 and 11 and Voyager 1 and 2. Realizing that these robotic vessels would become among the first human artifacts to leave the Sol system after their missions to the outer gas giant planets, Drake and his colleague Carl Sagan and others designed messages and information packages for the beings who might one day find them drifting through the galaxy. For though their original missions would be long over and their mechanical systems shut down and frozen from the deep cold of interstellar space, the probes themselves and the METI artifacts bolted on to them would stay intact for many millions and even billions of years if left undisturbed in the preserving celestial vacuum. 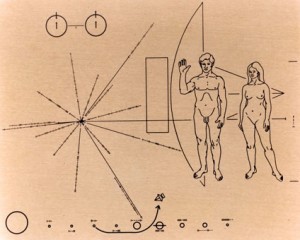 This collection of far-sighted people assumed and hoped that the recipients, no matter how alien they might otherwise be to humanity, would at least have the languages of science and mathematics in common, since it would require a species with a sophisticated technological ability to travel among the stars to find them. Thus the information content of these packages were prefaced and suffused with these presumed universal keys to ease the task of decipherment.

Image: The plaque aboard Pioneer. Pioneer 10 and 11’s famed Plaque features a design engraved into a gold-anodized aluminum plate, 152 by 229 millimeters (6 by 9 inches), attached to the spacecrafts’ antenna support struts to help shield it from erosion by interstellar dust. Credit: NASA.

Sagan and his colleagues also noted that a good deal of humanity had a strong interest and various reactions to the Pioneer Plaques and Voyager Records. While some of it remained parochial, from fear of hostile aliens discovering our presence to prudery over sending nude human figures to the stars, many others were captivated and enlightened by the makers’ efforts to include a fair sampling of the various human cultures across our world, especially in the case of the Voyager Records, which had music, images, and languages representing a large swath of our species.

These plaques and discs, remarkable as they were, were physically limited in just how much they could tell another species about us or our own descendants who might one day venture into the galaxy and find these artifacts of their ancestors. In addition, not every opportunity to introduce ourselves to the wider Cosmos has been taken up by those who have built later vessels aimed at the stars, stating a lack of time, resources, and interest.

It is so important that a young and developing species such as humanity does not blindly toss its artifacts and eventually members of our own kind into a vast realm full of so many unknowns. Even if we are unaffected by our actions due to our current limitations, our descendants may pay an unfortunate price for our short-sightedness, or we may even cause problems for beings we do not even know exist yet.

Addressing these long-term and far-reaching issues, physicist Tibor Pacher of Hungary has begun a collection of programs aimed at ensuring that all future deep space missions contain information packages that properly represent our species and our world. These programs are also designed to raise awareness and education among the beings of this planet.

The program, known as Faces from Earth, is a part of Dr. Pacher’s Peregrinus Interstellar, which is devoted to promoting interstellar exploration. 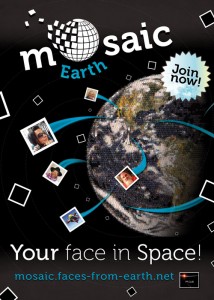 The primary goal of Faces from Earth is to make sure that every space mission leaving our Sol system has some kind of proper representation of its makers’ species and their home aboard. Even if the mission team has neither the time nor the interest in adding an information package to their spacecraft, Faces from Earth can provide one for them so that future recipients of vessels from our planet are not left in a state of confusion over who made and sent this craft and why.

One way Dr. Pacher envisions this plan is with Mosaic Earth. This project uses an image of Earth built up from the faces of many people from all over the globe in a holographic form to simultaneously represent our planet and our species. Every human being with access to the Internet can participate in Mosaic Earth and add their face to this representation of our species into the galaxy.

Mosaic Earth and other plans for future information packages on deep space missions will be placed aboard the using the One Kilo Message plan, a container weighing just one kilogram that will carry our messages and information to the stars. The design of these projects is meant to allow the widest capacity and variety of information about humanity that can be placed aboard a spaceship using as little volume as possible to ensure that the main mission of the vessel is not compromised. The Faces from Earth projects will also be designed for flexibility in terms of future improvements in the technology of storing and relaying information.

The other plan for Faces from Earth is bring about a global awareness of the many peoples on our planet and to educate them about astronomy and the Universe in the process. Having many people of all ages and backgrounds involved in this process will naturally lead to these goals.

In summation, the importance of being in essence respectful citizens of the galaxy and giving some kind of valuable legacy to our children is a driving force in the creation of Faces from Earth. It is designed to bring together people from multiple fields and disciplines across human culture to more fully represent the beings and items of our world to the Universe on all future deep space missions. We invite you and those who you think may be interested in such a project to join Faces from Earth to participate in our historic emergence into the Cosmos.