Meetings like the Royal Astronomical Society’s gathering in Glasgow can be overwhelming, with all kinds of news to track via emails, news releases and Twitter. Yesterday we looked at the possible signature of rocky planets in the atmospheres of white dwarfs. But the unusual orbits of planets newly discovered by the WASP project (and follow-up studies of older hot Jupiters) get pride of place as perhaps the most notable announcement so far. WASP (Wide Angle Search for Planets) turned up nine new planets, bumping the exoplanet total to 454), but follow-up studies of these worlds, along with other ‘hot Jupiters’ from earlier surveys, showed that six out of the 27 examined orbited opposite to the rotation of their host star. Moreover, more than half of the planets studied are misaligned with their star’s rotation axis. 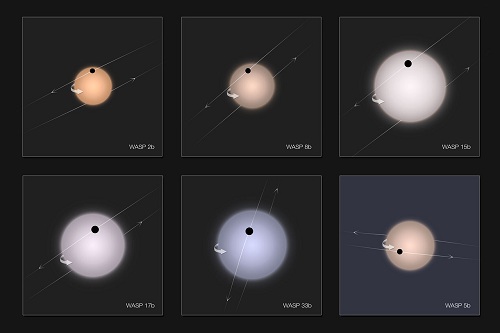 Image: Exoplanets, discovered by WASP together with ESO telescopes, that unexpectedly have been found to have retrograde orbits are shown here. In all cases the star is shown to scale, with its rotation axis pointing up and with realistic colours. The exoplanets are shown during the transit of their parent star, just before mid-transit. The last object at the lower right is for comparison and has a “normal” orbital direction. The size of each image is three solar diameters. Credit: ESO/A. C. Cameron.

If misaligned orbits sound like a minor point, consider this: We’d like to know whether the existence of a hot Jupiter in a tight orbit rules out the possibility of a terrestrial world in a wider orbit. And the answer seems to depend on how these planets form. They’re surely born in the outer reaches of their solar systems, with cores made of the rock and ice particles we’d expect to exist there. If the hot Jupiters then went through gravitational interactions with the dust and debris disk from which they formed, they could migrate in to their present, tight orbits and should show alignment with the parent star’s rotation axis. That’s a scenario that allows planets like the Earth to form later, a cheery thought for life but not one enhanced by the new findings.

For if we’re looking at numerous misaligned orbits including retrograde paths around the primary star, then the other migration scenario comes into play. Here, we forego interactions with the dust disk and talk about much slower gravitational processes operating due to the effect of more distant planets or close stars. As opposed to millions of years, we’re now talking about taking hundreds of millions to move a giant planet into an orbit that eventually undergoes tidal friction, causing its orbit to circularize but remain randomly tilted close to the star.

Exoplanet hunter Didier Queloz (Geneva Observatory), who was closely involved with this work, notes the result: “A dramatic side-effect of this process is that it would wipe out any other smaller Earth-like planet in these systems.” To learn more, of course, we’ll need fuller descriptions of exoplanetary systems, so we can learn how many hot Jupiters occur in systems with more distant massive companions. Andrew Cameron (University of St. Andrews), who presented the current study at the RAS meeting in Glasgow, points out that the new results present quite a challenge to conventional wisdom holding that planets should orbit in the same direction as their stars spin.

Preprints of the papers from the SuperWASP Consortium can be found here. An ESO news release is also available, as is a release from Las Cumbres Observatory. Las Cumbres used robotic telescopes located in Hawaii and Australia to provide brightness measurements that helped researchers determine the size of the planets. But follow-up radial velocity observations of these transiting worlds were performed by observatories around the world, from the Nordic Optical Telescope in the Canaries to the HARPS spectrograph on the 3.6-meter ESO telescope at La Silla. This animation showing how distant objects can perturb a gas giant’s orbit may be helpful.

Next post: Musings on SETI and Nearby Brown Dwarfs