Yesterday’s musings on extraterrestrial contact were inspired both by Stephen Hawking and the surrealist painter Giorgio de Chirico (1888-1978). Whereas Hawking opined that an encounter with an alien culture could be dangerous, my own hunch was that it would be deeply mysterious and perhaps not even understood as contact, given the huge differences in technology between us. That called De Chirico’s strange cityscapes to mind, what Walter Wells calls ‘their deep and often irrational shadows, their empty walkways and portentous silences.’ 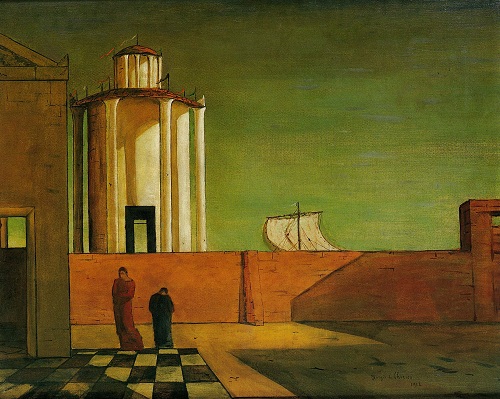 It helped, of course, that years ago I had reviewed V.S. Naipaul’s The Enigma of Arrival, which draws heavily on the De Chirico painting of the same name (shown above). Naipaul’s book is a strange, autobiographical meditation whose subject is consciousness confronted with mystery. He imagines one of the two figures in the painting as a traveler and conceives a story based on the scene, one set in what he calls a ‘dangerous classical city,’ but he soon becomes caught up in autobiographical introspection and The Enigma of Arrival turns into an exercise in self-indulgence.

Too bad, because Naipaul at his best is a great writer. Even so, both the De Chirico painting and Naipaul’s treatment of it stayed with me, and it has often occurred to me that our scientific ‘arrivals’ can in their own way be just as enigmatic. A case in point: Last week we learned that the Spitzer Space Telescope, in its studies of the Neptune-sized planet GJ 436b, had performed an analysis of the distant world’s atmosphere. The result was unusual. GJ 436b should, by our current theories, show the clear signature of methane in its atmosphere. In fact, an atmospheric mix of hydrogen, carbon and oxygen in a temperature range up to 1000 Kelvin (726 degrees Celsius) should feature just tiny amounts of carbon monoxide and a large supply of methane.

But GJ 436b gives us just the opposite. Spitzer can detect its carbon monoxide but finds a clear deficiency of methane. In fact, the amount of methane here is 105 times less than predicted for a planet in thermochemical equilibrium. H2O is also present, as is CO2 in trace amounts. The technique, using the secondary eclipse as the planet moves behind its star as seen from Earth, has been proven sound and used on several ‘hot Jupiters.’ Spitzer worked with six infrared wavelengths and simply didn’t come up with what was expected. Joseph Harrington (University of Central Florida) is principal investigator on this work:

“In this case, we expected to find methane not because of the presence of life, but because of the planet’s chemistry. This type of planet should have cooked up methane. It’s like dipping bread into beaten eggs, frying it, and getting oatmeal in the end.”

Not a satisfying result in one sense, but of course from the scientific perspective, unusual results are all the more fascinating because they challenge us to improve our theories. GJ 436b is located in the constellation Leo some 33 light years away, orbiting an M-dwarf in a 2.64 day orbit. And while we figure out how to account for this planet’s atmosphere, we can also look forward with excitement to the extension of these techniques to smaller and cooler worlds, rocky planets not that much bigger than the Earth that could conceivably house life.

De Chirico’s art is all about showing life’s mystery and dwelling upon our aesthetic response. Science, on the other hand, uncovers mysteries like that of GJ 436b, but its aim is to resolve the tension they create by adjusting our models to fit incoming data. Good scientists rejoice in mystery even as they set about understanding it, much as the reader of suspense novels turns pages in anticipation of untangling the plot. What new enigmas may turn up when we have the ability to detect biomarkers on Earth-class worlds? And who will be the new De Chirico to capture the scene?