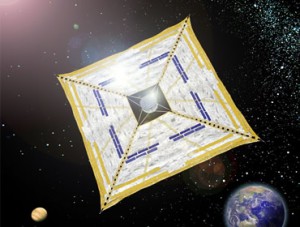 The 2nd International Symposium on Solar Sailing (ISSS 2010) draws closer, the event occurring July 20-22 at New York City College of Technology of the City University of New York. The focus will be on recent advances in solar sailing technologies and near-term solar sailing missions, with coverage of hardware, enabling technologies, concepts, designs, dynamics, navigation, control, modeling and mission applications and programs. The deadline for abstracts is May 15, 2010, with full information available at the symposium’s Web site.

Image: The IKAROS hybrid sail concept. A solar sail gathers sunlight as propulsion by means of a large membrane while a solar “power” sail gets electricity from thin film solar cells on the membrane in addition to acceleration by solar radiation. What’s more, if the ion-propulsion engines with high specific impulse are driven by such solar cells, it can become a “hybrid” engine that is combined with photon acceleration to realize fuel-effective and flexible missions. Credit: JAXA.

Given that CUNY is the home turf of solar sail experts Greg Matloff and Roman Kezerashvili, the conference should become the epicenter for current analysis of these technologies. The major space agencies are strapped for cash, but a robust solar sail literature continues to flourish and interesting mission concepts are under development at the Japanese space agency JAXA, where a demonstrator hybrid solar sail/solar cell mission is being readied for launch on May 18, and at The Planetary Society, whose LightSail-1 may fly later this year.

I love Philip Morrison’s statement that ‘SETI is the archaeology of the future,’ quoted by Jill Tarter in a recent opinion piece on CNN. Archaeology is all about the past, and the targeted beacon we might detect from a civilization a thousand light years away would have information about its past, not its present state. So while the information would not be up to date, it would be deeply informative, telling us by example that at least one civilization had lived long enough to survive the danger of self-destruction by means of its own technology, or at least long enough to send the signal.

The longevity of a technological civilization is the crucial factor in so much of this discussion. Give it a high value and the chances are that any civilization we encounter will be older than our own. That concerned Stephen Hawking enough to worry about what a powerful, nomadic culture might do to a life-bearing world it encountered. The other side of the coin is what Tarter suggests, that longevity brings with it a measure of wisdom. Suppose we make not just electromagnetic contact but actually encounter an alien culture in our own system:

Well, one thing is for sure: If they can get here, then their technology is superior to ours, and not just by a little! Arthur C. Clarke’s third law is, “Any sufficiently advanced technology will be indistinguishable from magic.”

Can we be certain that their magic would do us harm? I would hope that Hawking would agree that a large value for L (a requirement for that magical, star-spanning technology) could also mean that their distant civilization had found a way to stabilize itself in order to survive and grow old. That might require outgrowing any aggressive and belligerent tendencies that may have characterized their youth.

Paul Davies makes much the same case in an essay this morning via the Wall Street Journal, although Davies is more emphatic:

…suppose by some fluke aliens did come to visit Earth in the near future, then comparisons with Columbus are in any case wide of the mark, and reflect the rampant anthropocentrism that pervades much speculation about alien life. Just because we go around wiping out our competitors doesn’t mean aliens would do the same. A civilization that has endured for millions of years would have overcome any aggressive tendencies, and may well have genetically engineered its species for harmonious living. Any truly bellicose alien species would either have wiped itself out long ago, or already taken over the galaxy.

I prefer Jill Tarter’s approach, which notes that an advanced society might have to outgrow its aggressive tendencies to survive. Davies takes that conjecture and elevates it to a principle: “A civilization that has endured for millions of years would have overcome any aggressive tendencies…” Perhaps. But we’ve never encountered such a civilization, and have no way of knowing how it would behave.

Tarter is careful to note that the SETI Institute isn’t involved in broadcasting messages, but in listening to the universe to learn what might be out there, adding “If signals are detected, everyone on the planet should have a voice in deciding how to respond.” That assumes, of course, that we pick up a targeted transmission rather than extraneous signals from a civilization merely going about its business. The latter case still leaves the question open: Inform another intelligent species of our existence, or continue to listen and learn?

A Wanderer in the Oort Cloud?

How to explain odd, detached Kuiper Belt objects like Sedna? One way is through a large object perturbing the Oort Cloud, a possibility examined in a new paper by John Matese and Daniel Whitmire (University of Louisiana at Lafayette). The duo have been working for some years now on comet dynamics, in particular on the orbital parameters of ‘new’ Oort cloud comets, ‘new’ being understood as first-time entrants into the inner planetary region. It turns out an anomalous pattern exists here that can be explained by an Oort Cloud giant planet.

Because we have no detection from IRAS or 2MASS data, we can place a limit on the possible mass and present distance of this object. If it exists, the world the authors call Tyche (the good sister of Nemesis) is between one and four Jupiter masses and orbits in the innermost region of the outer Oort Cloud. The optimum wavelength for detecting the putative planet is in the 5-micron region, well within the limits of the WISE infrared survey, and the new paper suggests just where WISE might look.

The paper, submitted to Icarus, is Matese and Whitmire, “Persistent Evidence of a Jovian Mass Solar Companion in the Oort Cloud” (preprint).

Next post: Astrobiology in Houston: From Fossils to SETI