With its May 18 launch date fast approaching, Japan’s IKAROS hybrid sail mission is at last getting a bit of press attention, long overdue in my opinion. The Daily Mail, at least, has just run a story on IKAROS, which will combine two mission concepts within a single spacecraft. Its solar sail works conventionally, using the momentum of photons from the Sun to accelerate the craft. But the JAXA designers have added thin film solar cells on the sail membrane. These produce the electricity that could be used in future (and larger) iterations to drive an ion engine.

But IKAROS (Interplanetary Kite-craft Accelerated by Radiation of the Sun) is a demonstrator, not only taking the sail concept into space but pushing it into interplanetary regions. Launched in tandem with the Venus Climate Orbiter AKATSUKI, the spacecraft will deploy its sail a month after launch on the way to Venus, and having swung by the planet, will test out its propulsion and navigation systems. Kelvin Long, head of Project Icarus, was the first to forward me the link to the Daily Mail story, and that reminds me to note that despite the similarity in names, IKAROS bears no relation to the interstellar probe design Kelvin’s team is developing.

Not that the interstellar community doesn’t have high hopes for sail concepts, and it’s safe to say that anyone interested in the problems of deep space propulsion will rejoice at the launch of IKAROS. What we need at this juncture, with reams of theoretical work compiled, is to start gathering data from live missions. Perhaps the most obvious issue for IKAROS and any other design is sail deployment. The IKAROS sail is a square membrane with a diagonal distance of 20 meters, made of polyimide some 7.5 micrometers thick, with the solar cells, steering devices and dust-counter sensors fitted directly to the membrane. 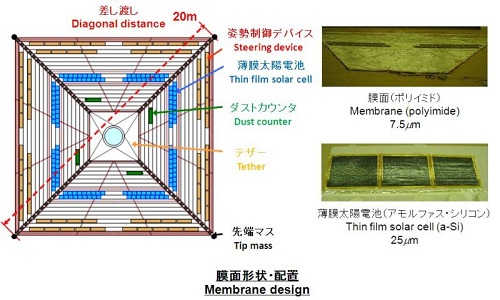 Osamu Mori, project leader for IKAROS, describes the sail membrane in this interview:

Polyimide resin allows us to create a much lighter sail. As well as being extremely strong, it doesn’t need glue, because it can be joined using heat sealing. Polyimide resin is originally yellow, but one side of IKAROS’s sail is silver. This is because aluminum is vapor deposited on one side of the film, in order to reflect sunlight more efficiently. In addition, the film is reinforced in such a way as to prevent it from splitting all the way if it’s ripped. If the solar sail is torn, its performance will decline slightly, but it can still continue its space travels.

One way to deploy a sail is to use conventional mast and boom construction, but you pay a penalty in weight and complexity. The IKAROS team had a different idea. The sail, wrapped and folded around the body of the spacecraft, will be spun up to 20 revolutions per minute. Spinning the spacecraft will allow centrifugal forces to unfurl the sail, and spin-stabilization will likewise keep the weight down due to the lack of a supporting truss. JAXA’s sail team has conducted experiments both on the ground and aboard a balloon, where the sail membrane was spread in a near-vacuum.

Mori adds that sail orientation and navigation is going to prove an interesting issue. IKAROS could change the direction of the sail with an onboard thruster but can also maneuver solely with solar power, changing the reflectivity of various parts of the sail by ‘frosting’ the film. The part of the sail with reduced reflectivity thus generates less acceleration, so the sail’s attitude can be controlled. In addition, IKAROS will carry a dust counter and an instrument to observe gamma ray bursts.

Japan’s plans for the hybrid sail/cell design are quite ambitious. JAXA’s Jupiter and Trojan Asteroids Exploration Program was born in 2003 and chose solar sail technologies for the mission. IKAROS is thus a demonstrator not only for sail concepts in general but for the specific issues that a Jupiter mission will face. At 5 AU, a sail in Jupiter space receives only 4 percent of the amount of sunlight it would in Earth orbit, drastically reducing the effectiveness of a conventional sail. This is the reason for the solar cell experiment, which would drive an ion engine needed for maneuvering a larger Jupiter-bound sail.

But first things first. The IKAROS demonstrator will need to prove itself in terms of deployment, navigation, attitude control and power generating capabilities, teaching us whether future hybrid designs using ion propulsion are indeed feasible. We’ll begin to learn more on May 18, when IKAROS and AKATSUKI blast off from the Tanegashima Space Center.

Previous post: Astrobiology in Houston: From Fossils to SETI