Is Jupiter the best place to collect massive amounts of helium-3? The Project Daedalus designers thought so. Back in the 1970s, members of the British Interplanetary Society set out to design a starship that would use pulsed fusion propulsion, with deuterium and helium-3 as fuel. Daedalus had mind-bending requirements, for the plan was to drive it to 12 percent of lightspeed on a flyby mission to Barnard’s Star that would take fifty years to arrive. 250 pellets of deuterium and helium-3 would be detonated every second in its combustion chamber over a thrust period of four years. That calls for a lot of fuel, and therein lies the problem.

Fueling Up the Probe

We can find deuterium (an isotope of hydrogen) right here on Earth, but helium-3 is a rarity. The Daedalus team figured it needed some 30,000 tons of helium-3, so it envisioned mining Jupiter’s atmosphere, where the stuff is plentiful. Imagine floating factories in the atmosphere of the giant planet using waste heat to generate lift, so-called ‘aerostats’ that would be serviced by orbital transports. The task of mining Daedalus’ fuel was almost as daunting as the prospect of an interstellar journey, and pointed to the need for a vast solar system-wide infrastructure to support it. 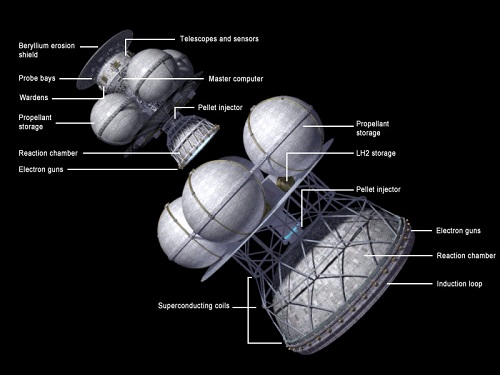 But is Jupiter the best option? The Project Icarus team, now updating the original Project Daedalus, is asking this and many other questions about the original design, including whether or not there is a case to be made for a planet like Uranus, likewise rich in helium-3 but with a much shallower gravity well. For that matter, what about mining our own Moon, now believed to have resources of helium-3? The design team is shaking down these and other ideas in what Leonard David calls an ‘exercise in theoretical engineering to the extreme.’ David writes about Icarus in this Space.com feature.

The current terms of reference for Project Icarus are as follows:

Where to Send an Interstellar Probe

One current debate involves the choice of targets. When Daedalus was being designed, Barnard’s Star was thought to have planets, a finding that later turned out to be erroneous. You pick a target based on the optimum planetary findings, but just what are they in today’s exoplanetary environment? Alpha Centauri is thought to be the closest stellar system, but the WISE mission may show us a brown dwarf even closer than this, perhaps as nearby as three light years. If that happens, does Icarus consider a brown dwarf destination, or stick with larger M-dwarfs and G- and K-class stars?

Or consider Alpha Centauri itself. We have three teams now at work on radial velocity studies that should give us an answer within three years about whether there are rocky worlds around Centauri A or B. Kelvin Long, who heads up Icarus and who is coordinating the effort between the British Interplanetary Society and the Tau Zero Foundation, is wisely keeping the options open. As design work on fusion methods and numerous other components gears up, the Icarus team will hold off until 2013 before choosing its optimum target, by which time we should have some of these questions settled. The final study reports are due in 2014.

Long an admirer of the Project Daedalus effort (my copy of that team’s final report is battered, dog-eared and crammed with notes after years of use), I’m pleased not only with the quality of the Icarus team, but with the fact that many of the Project Daedalus designers are offering their insights as well. David quotes Kelvin Long on the nature of the project:

“There is a need to maintain interest in and the capability to design interstellar probes. With many of the historical leaders in this field now nearing retirement or deceased, the Project Icarus study group wants to take up the baton and keep alive the long term vision that travel to the stars will one day be possible. This is one of the reasons why over half of the team is relatively fresh out of their university studies.”

An exercise like Daedalus relies upon identifying the key technological markers for an interstellar attempt. That means determining where we are today with propulsion ideas like fusion, which continues to defy our best efforts to extract useful energy here on Earth. What Icarus brings to the table that Daedalus did not have is, as primary propulsion lead Richard Obousy points out, over thirty years of new data on experimental fusion, including the interesting possibility of using tiny amounts of antimatter as fusion catalysts. As Obousy tells David, “All these technologies could certainly optimize the original Daedalus design, meaning less mass for the propulsion system and more possibilities for the payload. We hope our study will result in a faster and less massive design.”

Less massive indeed, for the original Daedalus was a 54,000 ton vehicle. If you’re interested in how the Icarus team is tackling this and other questions, have a look at the Project Icarus blog, the latest entry of which deals with measuring stellar distances and the science that an interstellar probe could return. That data return itself is a fascinating question. Do you communicate with lasers, or perhaps even something more exotic, such as a communications link based on the Sun’s gravitational lens? The energetic Icarus team is tackling these issues now and will be occupied for the next four years in refining each mission component.

A completed starship design study tells us where we are today and sparks the imagination. My own hope is that just as Icarus continues the Daedalus tradition by examining fusion alternatives, it may lead to future spinoff studies on other propulsion ideas, including beamed sail concepts. The key thing is to get serious work focused on interstellar propulsion issues so we can learn how new technologies may help us resolve seemingly intractable problems.

Next post: Voyager 2: The Art of Deep Space Repair