The fastest moving spacecraft in our Solar System is currently Voyager 1, which is moving at 61,419 kilometers per hour, a figure that works out to 17.06 kilometers per second. It’s always interesting to weigh such speeds against the hypothetical upper limits we would get from certain kinds of propulsion. Geoffrey Landis told me years ago, when we were talking in his office at Glenn Research Center in Cleveland, that a reasonable Sun-diver maneuver (a close pass by the Sun to get the ultimate gravitational boost) might result in a properly designed solar sail getting up to 500 kilometers per second. Quite a jump from Voyager 1. 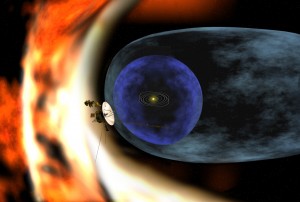 On the other hand, contrast it to a journey to the nearest stars. Moving at 500 kilometers per second (assuming they could withstand the acceleration of the maneuver), the occupants of our solar sail starship would travel some 2580 years before reaching Centauri A and B. I’ve seen some extrapolations that get travel time to the Centauri stars down to about 1100 years using the same kind of Sun-diver maneuver, but I can’t find anything faster via solar sails unless we start talking about beamed propulsion, in which case all bets are off. One of Robert Forward’s designs reached 50 percent of lightspeed but assumed construction projects to build the necessary infrastructure that made the interstellar journey seem like the least of our problems.

Voyager 1 is also the most distant human object, at a distance from the Sun of 16,962,908,475 kilometers (as of this morning), or just above 113 AU. Voyager 2 is a distant third at 92 AU, with the no longer communicative Pioneer 10 at 100.7 AU. As for New Horizons, our doughty mission to the Pluto/Charon double dwarf planet, it’s now 16.629 AU out, moving at 16.2 kilometers per second. You can find a handy chart of these facts on Daniel Muller’s site, which draws on data from JPL/NASA, ESA and other space agencies and organizations.

Speaking of Voyager 2, a flurry of concern arose late last week with the news that the spacecraft has been put into a troubleshooting mode after changes were detected in the pattern of returning data. Most spacecraft systems seem healthy enough, with the problem arising in the flight data system responsible for data formatting before transmission to Earth. We talked last week about round-trip light travel times, which make dealing with onboard issues a problem for distant spacecraft. Ponder that Voyager 2, as of May 10, has a round-trip signal time of 31 hours 13 minutes and it’s still (barely) inside the Solar System.

Because of its problems, Voyager 2’s data are at present unavailable for decoding as mission team members work to troubleshoot the problem. I always think back to all the work that went into the Galileo mission’s high-gain antenna as engineers tried to get it operational after it failed in 1991. In 1995, working with an eighty-minute round-trip signal time, they were able to reprogram Galileo’s software to work with the low-gain antenna that was the only option left. Engineers also had to fix a major problem with the spacecraft’s digital tape recorder just before Jupiter orbital insertion, a problem that would reappear later in the mission.

The Galileo mission was still a success despite major limitations on data return because of the loss of the high-gain antenna. As to the Voyagers, there’s no doubt of the success of their mission. Diagnosis of the current problem continues, and we’ll have to hope for the best. We need as much data as possible as the spacecraft work their way through the heliopause and out into interstellar space. Their journey tells us how far we have come and offers a daunting look at how challenging it will be as we push our explorations out into the Kuiper Belt.