I’ve heard of Dyson spheres and Dyson swarms, but what exactly are Dyson ‘dots’? As coined by Greg Matloff, C Bangs and Les Johnson in their book Paradise Regained, the term refers to a type of solar sail. These sails are not meant for moving things around the Solar System, but for reducing the amount of solar radiation hitting the Earth. The authors imagine large numbers of the Dyson dots placed near the L1 point, using the momentum from solar photons to maintain their position. Imagine thousands — maybe millions — of these sails equipped with sensors to receive the instructions of their builders, communicate with each other, and make changes in the configuration of the swarm.

Could you use a sail array like this to cool off the planet? From the book:

…using reasonable middle values for the parasol parameters — 80 percent reflectivity or albedo, mass 53 grams per square meter, positioned 2,100,000 kilometers from Earth — we would need almost 700,000 km2 of sunshade area to achieve a reduction of 0.25 percent in the solar constant, that is, some 37 million metric tons.

And let’s put this into perspective:

…bear in mind that the United States alone burns about one billion tonnes of coal every year. One supertanker of the many hauling petroleum around the world’s oceans weighs about half a million tons fully loaded; and 37 megatonnes is roughly just 3 days’ supply of crude oil… If each Dyson dot has an area of 10 km2, then our array, or school, would consist of 70,000 units. 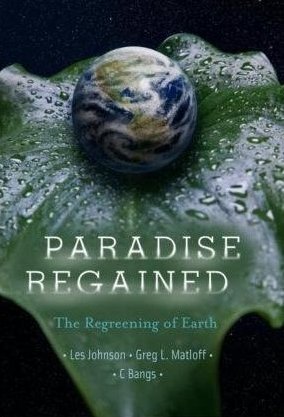 Now back into an even deeper perspective, which is what Paradise Regained is all about. The authors advise us to look to extraterrestrial resources, to mine the heavens as a way of reducing the industrial footprint on Earth and restoring the planet’s ecological balance. Think space for resources, then, and realize that the 37 million tonnes referred to above amounts to the mass of a single, small stony-iron asteroid some 300 meters across, which is a class of rock so small that we’re only now starting to look for them.

Paradise Regained is a bracing study of what we might do in the near future to make life better, and that includes asteroid missions that could help us protect the Earth via methods like ‘gravity tractors’ and solar ‘parasols’ as well as missions to exploit their resources. In this context, the word ‘exploitation’ has less bite than it does on Earth, for resources in the Solar System are vast, and exist in an environment so deadly that there is little humans can do to degrade it. Moreover, a small asteroid 1 kilometer in diameter might contain 2 billion tons of iron ore, enough to meet the annual global demand for one year.

The asteroid 16 Psyche may contain enough iron ore to take care of our needs for millions of years. Moreover, many asteroids contain nickel, cobalt, copper, platinum and gold. Thousands of Near-Earth Objects (NEOs) exist in the 100-meter range or bigger, providing an all but limitless pool of raw materials. Needless to say, the authors also throw into the mix the possibilities of tapping the Sun’s energy output — 3.86 X 1026 watts every second of every day. The infrastructure needs are huge, encompassing spacecraft, solar arrays, antennae, ground support equipment and more. Can we afford to build it?

…that all depends on the cost of energy and how much of a value we place on the environment. The cost of energy production is not as simple as dollars, euros or yen. What is the cost to the planet of the strip mining required for the coal we burn in our thousands of power plants? What is the payoff in reduced defense spending that will result from us not having to depend on the volatile Middle East for oil to generate electrical power? How much is it worth to eliminate the acid rain associated with the burning of fossil fuels? What benefits will we reap from a power system that produces no greenhouse gases? The authors contend that when the real societal costs are considered, as well as the real monetary cost from end to end, space-based solar power begins to look like a winner.

From mining to fusion, Paradise Regained covers the numerous options that space affords our species. As for the latter, helium-3 gets interesting because it’s a potential fusion fuel that, while rare on Earth, seems to be plentiful in the lunar regolith. If we can ever make fusion viable, a mixture of deuterium (heavy hydrogen) and helium-3 is a desirable fuel choice because it produces little residual radioactivity. Some estimates of helium-3 on the moon run to about a million tons, a potential solution to our energy needs for centuries.

Because it is stuffed with possibilities, it’s tempting to keep racing through this book popping out facts and prescient speculations, but I don’t want to ignore the moving, poetic side of it, reinforced by C Bangs’ lovely artwork, which harkens back to a pastoral world of the imagination even as it embeds itself in the cosmos. Thus the lovely Shakespeare quote from the introduction:

I know a bank where the wild thyme blows,
Where oxlips and the nodding violet grows;
Quite over-canopied with luscious woodbane,
With sweet musk-roses and with eglantine.

That’s from A Midsummer Night’s Dream, and it conjures up a vernal Earth we’d like to preserve even as we spread the benefits of technology and industry to the less advantaged. Myths of a ‘golden age’ are just that, reflecting a time-honored nostalgia for a past that never truly was, but there is a sense that we can ‘regain’ that dreamed of Earth by creating it for ourselves, using our technology wisely to offload industrial activities to nearby space. Buy two copies of this book and give one to your local school library. The ideas are spread out here in dazzling profusion, a chastening reminder to those who see no value in space exploration and believe such funds should be spent here on Earth. Here we learn that the space payoff may be huge, transforming our planet even as it feeds our dreams.