Two versions of Icarus are on my mind today. Well, actually three. The first is the Japanese solar sail/solar cell hybrid called IKAROS, scheduled for launch today but scrubbed because of the weather at Tanegashima. The new launch date is Thursday May 20 at 2158 UTC (1758 EDT). IKAROS will piggyback aboard the JAXA H-2A booster with the Venus Climate Orbiter (AKATSUKI), and will be a ground-breaking shakedown of solar sail technologies in interplanetary space. Needless to say, we’ll follow this one with interest as solar sails move to the next level of testing.

Meanwhile, Kelvin Long reports that Project Icarus, the joint-undertaking between the British Interplanetary Society and the Tau Zero Foundation, made the pages of the London Metro newspaper recently. Be sure to click ‘This Week’s Graphic’ at the bottom of the article to view the whole story. Icarus, often discussed in these pages, is the successor to the BIS Project Daedalus starship study, and seeks to examine fusion propulsion and other technologies in light of the advances we’ve made in the last thirty years. The Metro has a bit of fun with the project but also makes a few errors, including discussing Ad Astra’s VASIMR design as an example of fusion propulsion.

The article also cites Epsilon Eridani as Icarus’ destination, although that’s very much up in the air as the team continues to evaluate the matter, knowing how important the ongoing studies of Alpha Centauri are, and the possibility that WISE may turn up a brown dwarf closer than Alpha Cen. And while it’s useful to get antimatter described in so public a venue, the Icarus team is not looking at antimatter as anything more than a possible fusion catalyst, which reduces the amount needed to far more manageable proportions and builds on work begun at Pennsylvania State University through projects like AIMStar, which was a conceptual design for a mission to 10,000 AU using antimatter in a fusion engine that would reach the Oort Cloud.

All the jokey bits aside, the Metro story does one thing I’ve rarely seen accomplished in the media when it comes to interstellar ideas — it looks at using the Sun’s gravitational focus to enhance communications. Thus this:

[Einstein’s] theory of relativity predicted a phenomenon known as gravitational lensing. Massive objects — like stars and galaxies — have enough gravitational influence that light (or radio waves) that pass that object become bent in toward it. This means that when they have passed the object, they have been bent in towards each other (just as light passing through a lens has). All the observer has to do is find the point where they come together (the focal point) and he will observe a greatly amplified signal — effectively shortening the communication distance between Icarus and Earth.

We’d better untangle this, too. The communication distance between Icarus and the Earth isn’t ‘shortened’ by gravitational lensing, but the amount of power needed to get a usable signal back to Earth from Icarus is hugely reduced, which means a reduction in the Icarus payload, and that’s a very good thing. With gravitational lensing, too, while there is a focal point, the gravity-focused signal continues along the focal axis for distances beyond the 550 AU lensing distance from the Sun, so there is no need to stop a lensing spacecraft at 550 AU for station-keeping. To my knowledge, Icarus is the first mission concept other than the FOCAL design being developed by Claudio Maccone to explore the possibilities of the gravitational lens. 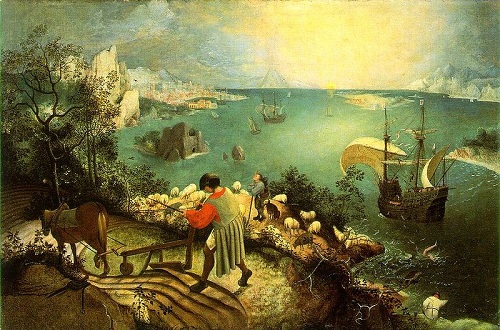 Image: Landscape with the Fall of Icarus was once thought to be the work of Pieter Bruegel, though the attribution is dubious. You can see the fallen Icarus in the water near the ship, even as the shepherd at the center of the painting looks skyward, as if pondering Icarus’ journey, and perhaps seeing the still airborne Daedalus circling the scene. Credit: Wikimedia Commons.

Thinking about Icarus and the public brings me to the third ‘Icarus’ I’ve thought about today, the classical figure himself. Icarus was, of course, the son of Daedalus, the man who created wings and flew into the heavens. I’ve had a few emails asking whether a starship named Icarus wasn’t asking for trouble. After all, the original Icarus flew too close to the Sun and fell to his death. But an internal document circulating among the Icarus team helps to explain the matter. It cites a quote from Arthur Eddington’s Stars and Atoms (Oxford University Press, 1927):

In ancient days two aviators procured to themselves wings. Daedalus flew safely through the middle air and was duly honoured on his landing. Icarus soared upwards to the sun till the wax melted which bound his wings and his flight ended in fiasco. The classical authorities tell us, of course, that he was only “doing a stunt”; but I prefer to think of him as the man who brought to light a serious constructional defect in the flying-machines of his day. So, too, in science. Cautious Daedalus will apply his theories where he feels confident they will safely go; but by his excess of caution their hidden weaknesses remain undiscovered. Icarus will strain his theories to the breaking-point till the weak joints gape. For the mere adventure? Perhaps partly, this is human nature. But if he is destined not yet to reach the sun and solve finally the riddle of its construction, we may at least hope to learn from his journey some hints to build a better machine.

Thus the purpose of Project Icarus, to strain theory to the breaking-point to find the weak joints. As an engineering study, Icarus isn’t about building a starship soon, but rather about making an assessment of where our technology is today and where we stand in terms of our understanding of interstellar flight. Over 10,000 hours of research time went into the original Daedalus study, some of it in the whimsical setting of London’s Mason’s Arms pub, which tells me the Daedalus team was possessed not only of a burning desire to study interstellar flight, but also of a sense of humor. The current team shows many of the same traits, reminding us that designing a probe that can go into deep space is a marvelous help for keeping things in perspective.