Raw images from Cassini’s Enceladus encounter yesterday are becoming available, the most fascinating of which show the view of the plumes as the spacecraft approached the moon from the night side. And check the image below, which is an extraordinary combination of Cassini targets the like of which I never thought I would see. At the bottom of the image, darkened almost to invisibility, is Enceladus’ south pole as the spacecraft speeds over its surface (click on the image to enlarge). Swinging into view beyond it are Saturn’s rings and Titan, its atmosphere clearly visible. Cassini will make a Titan flyby late this evening, in the early hours of May 20 UTC, this time passing to within 1400 kilometers of the surface in a study that will fill out Titan’s thermal map. 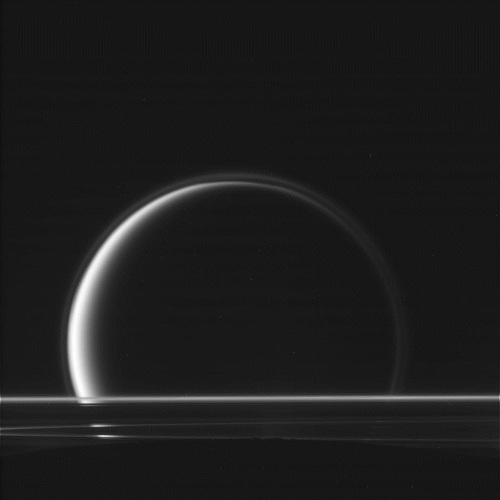 Enceladus and Titan are so aligned that Cassini will be able to make this second flyby with no additional maneuvering required. By studying the gravitational pull on the spacecraft, researchers hope to learn more about Titan’s internal structure, including whether a liquid ocean is found under the surface. At Enceladus, the goal is to analyze data from the ultraviolet imaging spectrograph to look for molecular hydrogen in the plumes, a reading that will offer clues about the moon’s interior. The following image is also a stunner, clearly showing the backlit plumes that give Enceladus such high astrobiological interest. 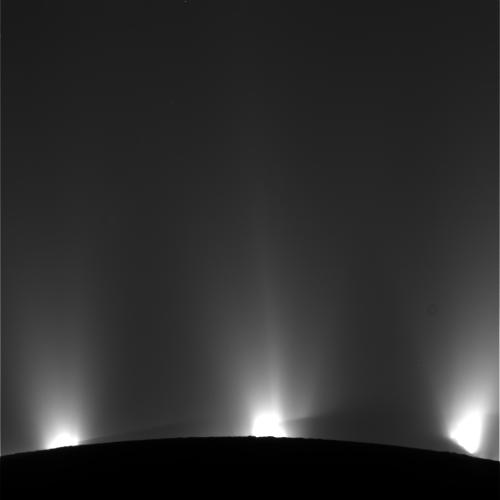 Meanwhile, Steinn Sigurðsson (Penn State) notes that the large number of spacecraft now operational in the Solar System, many powered down for cruise, provide interesting possibilities for deep space studies. Indeed, the Keck Institute for Space Studies is sponsoring a two-day mini-workshop at the Kavli Institute for Theoretical Physics on potential exoplanet observations. A case in point is the work performed by EPOCh (Extrasolar Planet Observations and Characterization), part of the EPOXI extended mission of the Deep Impact spacecraft, which examined the Earth/Moon system to learn how future planet hunter spacecraft would evaluate their findings.

Of course, doubling or tripling up on ongoing science is not always easy, as Sigurðsson notes:

…scheduling is completely subservient to prime mission requirements, including delays and rescheduling; and, particularly during the pre-prime mission cruise phase, the secondary science must not jeopardize the mission, instruments or spacecraft.

So, there is a trade-off there between wanting to exercise the instruments and get calibrations etc, vs risking damage, for example to moving parts (reaction wheels, gyros etc), power systems (degradation, thermal cycling etc), and optics and electronics due to exposure or thermal cycling.

The best course for using existing spacecraft, then, may be to wait until their primary missions are over. Even then, the choices are not easy:

…ongoing observations have a cost: communications, spacecraft operations and data analysis cost real money, and have a significant manpower demand, which adds up, so it is not obvious that it is cost-effective or worthwhile to run the secondary science, for the community overall – as opposed to the particular group wanting to use the particular capability.

Such factors mean there will be much to discuss at the workshop. You’ll recall from our previous coverage of EPOCh that the spacecraft, now enroute to comet Hartley 2, has targeted several known transiting exoplanets in a search for undiscovered worlds in those systems. Results of the analysis are now becoming available and demonstrate how missions can be extended in useful ways for the benefit of the exoplanet community. One wonders whether Cassini has possibilities in this direction after its extended mission is complete.

For one look at EPOCh results, see Ballard et al., “A Search for Additional Planets in the NASA EPOXI Observations of the Exoplanet System GJ 436,” submitted to the Astrophysical Journal (preprint).