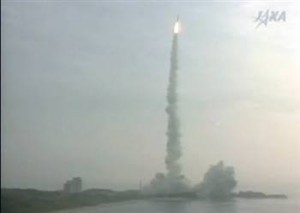 Congratulations to JAXA, the Japan Aerospace Exploration Agency, for the successful launch of the IKAROS space sail, launched from the Tanegashima Space Center along with the Venus Climate Orbiter yesterday evening US time. The launch was a beautiful sight via JAXA’s Internet feed and we now have the opportunity to shake down solar sail technologies in space, from deployment to navigation and maneuvering. The mission sequence ahead is shown in the diagram below, but as we wait for further news, a special nod of appreciation for IKAROS project leader Osamu Mori and the fine team that has made this solar sail a reality. 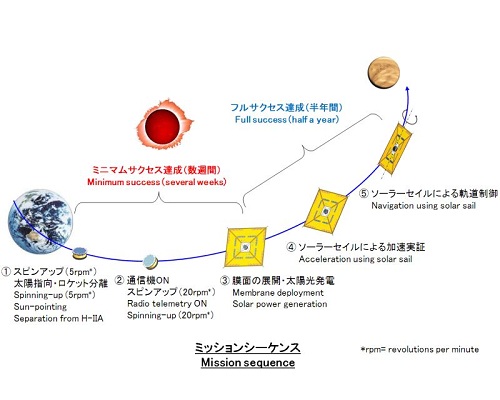 Image: After separation from H-IIA, IKAROS will spin at up to 20 rpm, deploying the sail membrane and generating solar power by means of thin film solar cells (minimum success level) within several weeks. Acceleration and navigation using the solar sail will then be demonstrated (full success level) within half a year. Credit: JAXA.

The AKATSUKI climate orbiter is a fascinating mission in its own right, but we focus on IKAROS because our brief in these pages is the technologies that may one day be adapted for deep space, and solar sails have a bright future in helping us travel without carrying propellant. Future sails will experiment with microwave and laser beaming as we learn how sails can operate far from the momentum-inducing photons of the Sun. Also fascinating in terms of IKAROS is JAXA’s hybrid design, which will generate solar power aboard the craft and, in coming iterations, test the capabilities of an integrated ion engine. Japan’s ultimate sail target is Jupiter.

The video below shows how IKAROS will deploy its sail, a maneuver that is the most crucial of the mission. Meanwhile, Louis Friedman reported to Planetary Society members yesterday that the LightSail program is on track for the launch of LightSail-1, the first in a series of three sail attempts that will dovetail nicely with IKAROS’ investigations of solar sail capabilities. LightSail-1 is to be ready for launch by the end of this year, with the actual launch date dependent upon the choice of launch vehicle. Like IKAROS, LightSail-1 will piggyback aboard another mission.

Local space news is complemented by news from the heliopause as we learn that the recent problems of Voyager 2 were caused by ‘one flip of a bit in the memory of an onboard computer,’ according to NASA. Scientists at the Jet Propulsion Laboratory were able to recreate the effect on a computer at their site and, on May 19, were able to reset the computer bit, with engineering data confirming success on Thursday. If all continues to go well, the receipt of science data will resume on May 23. Thus would end the furthest repair operation yet attempted, but only a precursor to what will be needed as we push into the Kuiper Belt and destinations beyond.