A New Horizons Wake Up Call

Recently we’ve been talking about long-distance repair, and how any probe launched beyond the Solar System is going to have to fix its own problems rather than relying solely on transmissions from Earth. New Horizons, halfway to Pluto/Charon in terms of distance, isn’t yet in that category. It’s going to eventually make its way into the Kuiper Belt, but for now, it’s close enough for controllers to wake it up periodically for checks. In fact, the next wakeup call, which comes tomorrow, begins a nine-week period of rigorous tests.

Long-term missions like New Horizon demand annual checkouts, and this one (as opposed to last year’s) is to be comprehensive, ranging from conducting heliospheric cruise science to uploading a series of code enhancements and bug fixes to the spacecraft’s fault protection software. The spacecraft’s backup systems will be checked and its seven scientific instruments re-calibrated. Principal investigator Alan Stern describes the process in his latest report. 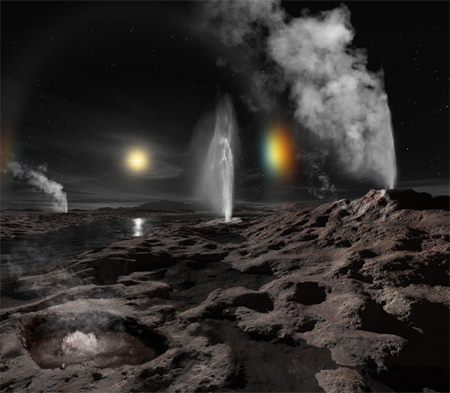 I wanted to work New Horizons in this morning anyway because of Ron Miller’s image in that report of what we might find when the spacecraft reaches its destination. After the surprises we’ve had every step of the way in exploring the Solar System, it wouldn’t be at all out of line to find geysers like these on Pluto — think of the ‘ice volcanoes’ of Triton, or the geysers of Enceladus. Here the artist is imagining liquid nitrogen or methane as the source, creating a weird and evocative landscape that we’ll glimpse only too briefly come the 2015 flyby.

Not all fixes to a spacecraft involve repairing malfunctioning systems. In the case of New Horizons, it’s also necessary to keep a close eye on the course. With the vehicle well into the outer Solar System, it’s interesting to speculate about what forces could be causing the need for a course correction. No, it’s not the so-called ‘Pioneer Anomaly,’ but the reflection of thermal photons from New Horizons’ radioisotope thermoelectric generator (RTG) striking the back of its high-gain antenna. A tiny effect multiplied over four years has consequences.

The fix is to be a June 30 course correction involving a change in speed of about 1.5 kilometers per hour. The 30-second thruster burn will make New Horizon’s first course change since late 2007. Also coming up this summer are cruise observations of Jupiter, Uranus, Neptune and Pluto itself, along with four weeks of observations of the space plasma environment near the orbit of Uranus.

Stern’s report mentions a workshop at the Space Telescope Science Institute in Baltimore devoted to Pluto’s recently discovered moons Nix and Hydra. One of the goals here is to get a precise fix on the orbits, sizes and masses for the two moons, useful information in planning for the 2015 flyby. Says Stern:

Studying Nix and Hydra from here on Earth (or even in Earth orbit) is hard, owing to their great distance, small size and extreme faintness. But over the past five years we’ve accurately mapped out their orbits, determined their colors, and constrained their diameters to be between about 40 and 145 kilometers (about 25 and 90 miles). It has also become clear that Nix and Hydra are somehow intimately related to Charon, as evidenced by their similarly circular and near-zero inclination orbits, and their orbital periods, which are extremely close to being exact multiples of Charon’s.

Eventually we’ll be sending missions to destinations much further than Pluto/Charon. As of this writing, New Horizons is 2,506,760,000 kilometers from the Sun, making for a light-delay time of 2 hours, 12 minutes. Getting around light delays of months or even years will involve the kind of AI systems we’ve talked about in recent posts. The Project Daedalus starship study envisioned robotic ‘wardens’ that could handle needed repairs, but these days we can talk about ‘evolvable’ hardware and ‘genetic algorithms’ as we look toward systems that can heal in-flight maladies and create the necessary tools to keep a space probe whole.