It’s AAS week in Miami, and the American Astronomical Society usually gives us plenty to talk about. Inclined orbits, for one thing. In our Solar System, the process of planetary formation seems relatively intuitive. The eight major planets orbit largely in the same plane, reinforcing the idea that the cloud of gas that collapsed to form the Sun contained leftover material that formed into a planet-yielding disk. We can point to outer system objects like Pluto (and certainly Sedna) as exceptions, but they’re much further out and subject to gravitational influences that this model can account for.

But as Barbara McArthur (University of Texas at Austin) and team told an AAS session yesterday, the star Upsilon Andromedae A has yielded a different result. We already knew that three Jupiter-class planets orbited the star, some 44 light years away and a bit younger and more massive than our Sun. But McArthur’s team now has determined the mass of two of the three known planets, and has produced the startling finding that the orbits of planets c and d are inclined by 30 degrees with respect to each other. 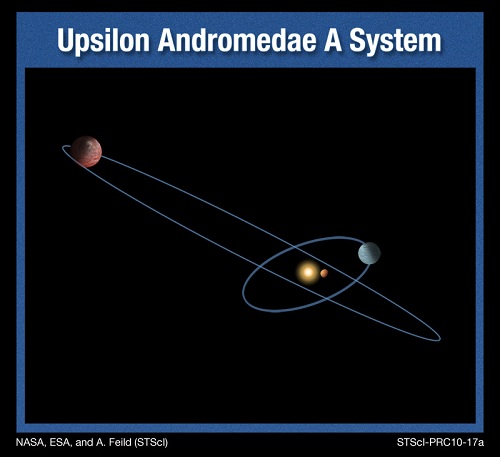 Image: An artist’s illustration of the Upsilon Andromedae A system, where three Jupiter-type planets orbit the yellow-white star Upsilon Andromedae A. Astronomers have recently discovered that not all planets orbit this star in the same plane, as the major planets in our solar system orbit the Sun. The orbits of two of the planets are inclined by 30 degrees with respect to each other. Such a strange orientation has never before been seen in any other planetary system. This surprising finding will impact theories of how planetary systems form and evolve, say researchers. It suggests that some violent events can happen to disrupt planets’ orbits after a planetary system forms. The discovery was made by joint observations with the Hubble Space Telescope, the Hobby-Eberly Telescope, and other ground-based telescopes. Credit: NASA, ESA and A. Feild (STScI) / B. McArthur (University of Texas at Austin).

This is a fascinating find, and represents the first time that the mutual inclination of two planets orbiting another star has ever been measured. And McArthur points to the work’s significance:

“Most probably Upsilon Andromedae had the same formation process as our own solar system, although there could have been differences in the late formation that seeded this divergent evolution. The premise of planetary evolution so far has been that planetary systems form in the disk and remain relatively co-planar, like our own system, but now we have measured a significant angle between these planets that indicates this isn’t always the case.”

The jury is out on the cause of the inclined orbits, but various scenarios emerge including planetary migrations inward toward the star and their accompanying interactions, or the ejection of planets from the system altogether. Complicating all this is the fact that Upsilon Andromedae has a companion binary, Upsilon Andromedae B. Rory Barnes (University of Washington) adds this:

“Our dynamical analysis shows that the inclined orbits probably resulted from the ejection of an original member of the planetary system. However, we don’t know if the distant stellar companion forced that ejection, or if the planetary system itself formed in such a way that some original planets were ejected. Furthermore, we find that the revised configuration still lies right on the precipice of instability: The planets pull on each other so strongly that they are almost able to throw each other out of the system.”

The Upsilon Andromedae A work combines astrometric data from Hubble with radial velocity data from several ground-based telescopes, enabling a determination of planetary masses that turns previous thinking on its head. We now learn that planet c has a minimum mass of 14 Jupiters, while planet d has 10, quite an upgrade from the earlier minimum masses of 2 and 4 Jupiters respectively. There are also hints of a fourth planet in a long-period orbit (still unconfirmed) and confirmation that Upsilon Andromedae is indeed a binary, its companion being a red dwarf in an orbit that has yet to be determined. An occasional close pass by such an object could provide the gravitational perturbation needed to adjust planetary orbits.

Also from the AAS meeting, Wired.com adds this interesting and much wider ranging speculation about the effect of planetary migration on habitable zones, based on computer simulations Barnes has run and will report on at the meeting:

Barnes’ simulations predicted more-dire consequences for extrasolar planets near the edge of their habitable zones, though. If the planet is on the cooler edge of the habitable zone, it could go through cycles of freezing and thawing. If it’s on the warmer side, the temperature could fluctuate from comfy to boiling from one millennium to the next.

“The inner edge is much more dangerous,” Barnes said. All the water could boil off and be lost forever, or the warming planet could experience a “runaway greenhouse” effect and end up a scorched wasteland like Venus.

But it’s not all bad news. Barnes suggests that some planets we might dismiss as snowballs could just be going through an eccentric phase.

“Our own Earth has gone through stages of glaciation — we call them snowball Earth phases — and we managed to pull out of it,” he said. “On a planet like that, on the outer edge, you will have reservoirs of life, and there will be habitats that will persist.”

Reservoirs of life and habitats that will persist in a system where planetary neighbors play havoc with a terrestrial world — there’s a science fiction setting for an ambitious writer to tackle! As for Upsilon Andromedae A, the work will appear in the Astrophysical Journal on June 1, where we’ll be able to go over it in more detail. Meanwhile, our notions of habitability experience yet another challenge, making us realize that even when we do start identifying seemingly terrestrial worlds around other stars, our early observations may not be sufficient to make the call on where and how a planet might support life.