One of the most useful technologies the Project Daedalus team lacked when designing its interstellar probe back in the 1970s was the personal computer. Today’s effort to re-visit Project Daedalus can draw on the strength of intercontinental networking for fast communications and widespread computer availability to design a probe differently. It’s exciting to hear that the Project Icarus team plans vIcarus, a ‘virtual’ interstellar mission drawing on the completed Icarus design and ‘flown’ through ongoing computer simulation. Spun out in real time, vIcarus will give designers and the public a chance to follow the mission step by step.

Andreas Tziolas (Variance Dynamical Corporation) discussed the idea on the Project Icarus blog recently, noting that over the next few years, the Icarus team will be creating computational models for propulsion, fault repair, communications, flight through the interstellar medium and all the factors impinging upon the behavior and stability of the spacecraft. Putting all these models into a master program will allow Project Icarus to be launched through cyberspace. Tziolas says a graphical interface will allow visitors to view every detail of the mission.

Obviously, computers allow us to do what would otherwise be impossible. Icarus is not being designed as a vehicle that will be flown in the near future, but as a study that updates the pioneering work of the BIS Daedalus team to show us where the critical systems for an interstellar probe powered by fusion stand today. Tziolas notes how useful vIcarus will be:

The idea for vIcarus came while thinking of the power and computer subsystems, where we imagined the spacecraft making programmed decisions such as fine-tuning the fusion reaction rate and course corrections all while interacting with the interstellar medium. Visualizing this process in real time would be extremely rewarding. Scientifically we could run full system simulations, without the need for statistical analyses and averaging schemes. As an educational tool, we could demonstrate spacecraft operation to students of spacecraft design and visually search for ways of improving on our design. It would indeed be rewarding in itself if, after five years of dedication, our models could be put to the test, having them run in real time for the entire forty year duration of the mission.

From an educational perspective, vIcarus is of obvious interest, and the software could potentially take an open source route for further development after the scientific study of Icarus is complete, allowing competing ideas to be examined and shared. All the models and codes from the Icarus design study will feed back real time information on trajectory, speed, and current command and execution protocols, with the intention being to make vIcarus parallel the decades-long mission to another star that a real Project Icarus would undertake. Such a robust software tool could be inspirational and turn more than a few young minds in the direction of aerospace engineering. 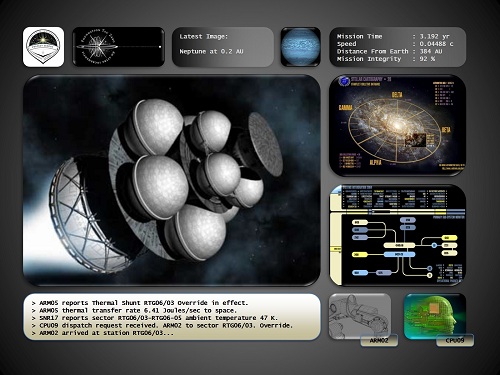 Image: The image shows a mock-up of what the vIcarus web interface may look like, using a Daedalus model as a placeholder for the spacecraft graphic. A central animation depicts the current state of the spacecraft, showing appropriate background and damaged systems. Control panels to the right allow the user to focus on specific subsystems. A virtual mission control room is depicted beside a running graphic of Icarus within a star field. Clicking on various terminals within the mission control room brings up subsystem performance graphs, maps, fuel burn ratios, current speed, etc. In the mean time, a dashboard displays general mission information, such as current speed, location, mission time, current status, etc. The message bar at the bottom of the frame shows the current command and control sequence vIcarus is addressing. Credit: Andreas Tziolas / Project Icarus team.

vIcarus is also discussed in the first paper released by the design team, now available on the arXiv server. The original Project Daedalus reports were consolidated into a landmark final report that summarized the analysis. Icarus will do the same, with this first paper being the prelude to a series of studies by the design team on every issue applicable to the mission. The new paper runs through propulsion issues and explains the terms of reference for the project, noting in particular the team’s decision to explore deceleration of the spacecraft at destination in order to provide a longer encounter time with the planetary system there. Daedalus used mini-probes for this purpose, but magnetic sail braking remains a distinct possibility for Icarus.

Icarus means plenty of late hours for its designers. From the paper:

It has been estimated that with 20 volunteer designers Project Icarus will require around 35,000 total man hours spread over a five year research programme culminating in the final design. For comparison, Project Daedalus began on 10th January 1973 and the final reports were published 15th May 1978 taking just over 64 months or over 5 years. The study reports state that around 10,000 man hours were used by 13 core designers and several additional consultants.

The paper offers the overview, and is especially interesting in terms of fusion alternatives. Whereas Daedalus looked to mine the atmosphere of Jupiter for the needed helium-3 (Daedalus employed Deuterium/Helium-3 fusion), the Icarus team will consider planetary alternatives (Uranus is particularly interesting because of its lower gravity well). And while Daedalus was powered by inertial confinement fusion (ICF) driven by electron beam, Icarus will be considering options like Antimatter Catalyzed Micro Fusion, a beam of anti-protons injected into a fusion fuel. Researching all these ideas will help the team define the current state of the art.