Finding life on Mars would be a huge accomplishment, but finding life on Titan would be a fundamentally different kind of discovery. Martian life might well be related to us because of the exchange of materials between our two worlds, the inevitable result of planetary impacts and the scattering of debris. But Titan is a far more unearthly place than Mars, its chemistry exotic, its climate seemingly beyond the range of any life form we have ever discovered. Life on Titan should be evidence of that ‘second genesis’ planetary scientists dream of identifying. 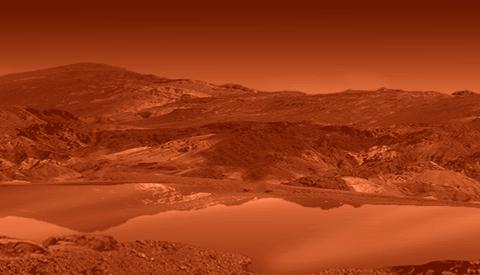 Image: This artist concept shows a mirror-smooth lake on the surface of the smoggy moon Titan. Cassini scientists have concluded that at least one of the large lakes observed on Saturn’s moon Titan contains liquid hydrocarbons, and have positively identified ethane. This result makes Titan the only place in our solar system beyond Earth known to have liquid on its surface. Credit: NASA/JPL.

Now we have two papers based on Cassini data that show complex activity on the surface of Titan. Is there a precursor to life on the distant moon, or even an exotic life form based on methane? Darrell Strobel (Johns Hopkins) is the author of a paper now in press at Icarus that shows hydrogen molecules descending through the atmosphere and disappearing at the surface. Using data from Cassini’s composite infrared spectrometer and ion and neutral mass spectrometer, Strobel has studied the density of hydrogen in various parts of Titan.

Hydrogen molecules on Titan are thought to be a byproduct of ultraviolet sunlight breaking acetylene and methane molecules apart, a process that is understood and should theoretically distribute hydrogen evenly through the atmosphere. What Strobel has found is a flow to the surface at a rate of 10,000 trillion trillion hydrogen molecules per second. Says Strobel:

Is there an unknown mineral acting as a catalyst on Titan’s surface, converting hydrogen molecules and acetylene back into methane? The question lingers even as we look at the hydrocarbon mapping of Titan’s surface, which is being done by Roger Clark (U.S. Geological Survey), who notes that despite earlier predictions that acetylene would fall from the atmosphere to coat Titan’s surface, Cassini has detected no acetylene on the surface. Acetylene is important because it could be the best energy source for methane-based life forms on Titan. It is conceivable that surface acetylene is being consumed as food.

Moreover, the hydrogen flow to the surface is consistent with models showing life on Titan consuming hydrogen. Astrobiologist Chris McKay (NASA Ames), who has proposed a set of conditions for methane-based life on the moon, draws a parallel with our own planet:

“We suggested hydrogen consumption because it’s the obvious gas for life to consume on Titan, similar to the way we consume oxygen on Earth,” McKay said. “If these signs do turn out to be a sign of life, it would be doubly exciting because it would represent a second form of life independent from water-based life on Earth.”

Cassini’s spectrometer has detected an absence of water ice on the surface, but has found plentiful benzene and an apparently organic compound that is still unidentified. A film of hydrocarbons seems to be forming over surface water ice. All of this makes Titan an extremely lively place, as Clark notes:

“Titan’s atmospheric chemistry is cranking out organic compounds that rain down on the surface so fast that even as streams of liquid methane and ethane at the surface wash the organics off, the ice gets quickly covered again. All that implies Titan is a dynamic place where organic chemistry is happening now.”

On a surface where temperatures hover around 90 Kelvin (-183 degrees Celsius), liquid methane and ethane are the only substances available to serve as a liquid for life processes. It’s an exotic and fascinating place, this Titan, but we’re far too early in the game to rule out non-biological explanations. Chemical reactions involving mineral catalysts are very much in the running as we await further Cassini data from future flybys. On that score, note that Cassini will be making a close approach to Titan later today (early Saturday June 5 UTC), moving to within 2000 kilometers of the surface to view the north polar region and its lakes. Of special interest: Kraken Mare, Titan’s largest lake, covering an area larger than the Caspian Sea.

The hydrogen paper is Strobel, “Molecular Hydrogen in Titan’s Atmosphere: Implications of the Measured Tropospheric and Thermospheric Mole Fractions,” in press at Icarus. Clark’s hydrocarbon mapping paper will appear in the Journal of Geophysical Research.