IKAROS now appears to be fully deployed and generating power from its photovoltaic cells. The IKAROS blog even has a photo of the cake with which the sail team celebrated the success, but you’ll also want to go to this IKAROS page for a look at further imagery, one of which is the photo shown below. The page has four similar photographs from different cameras aboard the spacecraft, and if I’m reading this right, more photos will be posted here as they become available. JAXA has also made available this news release about the deployment. 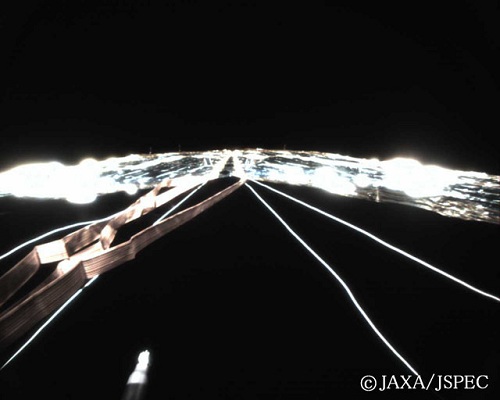 Lionel Ward, our Japanese translator extraordinaire, will be sending translations of the IKAROS blog postings and recent tweets from JAXA later today, and I’ll post these as a way of archiving the information here. This afternoon (1800 or so UTC) I’ll have today’s regular Centauri Dreams post up, but I wanted to share this image and give you the pointer for more as soon as possible. What an achievement this mission has turned out to be even this early on, and we now have a fascinating period ahead when we learn about the sail’s responsiveness, its maneuverability and its overall functionality. Once again, congratulations to project leader Osamu Mori and the entire IKAROS team!

Previous post: β Pictoris b: A New Planet and Its Implications