When I was a kid, interstellar destinations were sharply defined. It seemed obvious that you didn’t even consider Alpha Centauri, because a double-star primary system surely wouldn’t allow stable planetary orbits. So you looked around for single stars. Moreover, these should be stars a lot like the Sun, so that when Frank Drake began SETI with Project Ozma, it made all the sense in the world to focus on Tau Ceti and Epsilon Eridani. Both were similar enough to our own star to suggest that they would have planets, and maybe one like ours.

For that matter, we had no idea in those distant days whether the Sun was a statistical fluke in having planets or simply a garden-variety star with a system that was all but inevitable. These days we keep finding interesting planets, but so far (other than perhaps in the Gliese 581 system) we haven’t found anything enough like the Earth to consider any nearby system an obvious target for an interstellar probe. All that may change, and swiftly, when we learn more about Alpha Centauri’s system, and if WISE finds a close brown dwarf. The latter two possibilities are going to be resolved within a few short years.

The Project Icarus team — the interstellar probe study, not JAXA’s IKAROS sail — has been considering potential targets for their creation, just as the Project Daedalus crew did back in the ’70s (the glorious era of starship creation in the Mason’s Arms pub — there were giants in those days). Ian Crawford studies the matter in the Icarus blog, noting that a realistic maximum distance for an early probe is about 15 light years. This assumes a fusion starship design capable of 0.15c going after a target allowing a mission duration of no more than 100 years.

These are interesting numbers. As Crawford (University of London) notes, at present we know about 56 stars in 38 different stellar systems within this range. We have to be careful here, for not all stars within this volume of space have been discovered, and moreover, there are discrepancies, if slight, between the various catalogs of nearby stars. Crawford leans toward the RECONS (Research Consortium on Nearby Stars) catalog of one hundred nearest stars.

Now we find out just how tricky the target choice is. Let’s assume just for argument that the hunt for Alpha Centauri planets comes up dry. What’s the next possibility? It turns out that among the 56 closest stars, we have one spectral type A, which is Sirius, and one F (Procyon). Two G-class stars are available, Centauri A and Tau Ceti. Five K stars are possible, including Centauri B. But the overwhelming majority of nearby stars, 41 out of the 56, are M-class dwarfs. We round out the list with three white dwarfs and three probable brown dwarfs, although these numbers should increase with further WISE data.

The Case for ϵ Eridani

So far we know of planets around two of the 56 nearest stars, Epsilon Eridani (a K2 at 10.5 light years) and the M-dwarf GJ 674, which pushes our distance limit at 14.8 light years. So how about Epsilon Eridani? Crawford writes:

The planet orbiting epsilon Eri is a giant planet, with a mass about 1.5 times that of Jupiter. It has a highly eccentric orbit, which brings it as close to its star as 1.0 AU (i.e. the same distance as the Earth is from the Sun), to as distant as 5.8 AU (i.e. just beyond the orbit of Jupiter in our Solar System), with a period of 6.8 years. Although this would span the habitable zone (i.e. the range of distances from a star on which liquid water would be stable on a planetary surface given certain assumptions about atmospheric composition) for the Sun, this orbit lies wholly outside the likely habitable zone for a K2 star like epsilon Eri.

From an astrobiological perspective, then, Epsilon Eridani b doesn’t seem promising:

…being a gas giant, this planet itself it not a likely candidate for life, and its eccentric orbit wouldn’t help in this respect either (although it is possible that the planet may have astrobiologically interesting moons, perhaps similar to Jupiter’s moon Europa, which could in principle support sub-surface life).

Other planets in the Epsilon Eridani system? Maybe. An unconfirmed sub-Jupiter mass planet in a distant (40 AU) orbit may be there, and perhaps the system houses more Earth-like worlds. We’ll find out with further exoplanet investigation, and it should also be mentioned that Epsilon Eridani is circled by an interesting dust and debris disk. So we have to keep this young star on our list, even as we hold our thinking open about Alpha Centauri, and we have to realize how many other stars may soon be shown to have planets. Crawford again:

Clearly it would be of great interest if planets were discovered orbiting closer stars. Currently there have been no such planets discovered, but they are very likely to exist. Based on the detection rate to-date, and allowing for the known biases in the detection methods, it has been estimated that roughly 30% of main-sequence stars will have planets with masses less than 30 Earth masses. Thus, we might expect 16 or 17 of the nearest 56 stars to be accompanied by planets and, given the current lack of data on very low mass planets, it could easily be more. Although not targeted at any of the nearest stars, statistical results from the Kepler mission (which is looking for low-mass planets orbiting solar-type stars by the transit method…will greatly improve these estimates within the next few years. 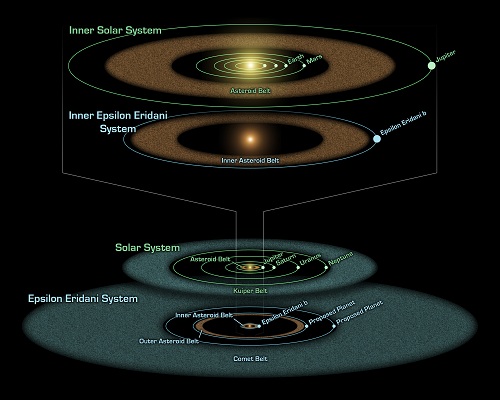 Image: This artist’s diagram compares the Epsilon Eridani system to our own solar system. The two systems are structured similarly, and both host asteroids (brown), comets (blue) and planets (white dots). Epsilon Eridani is our closest known planetary system, located about 10 light-years away in the constellation Eridanus. Its central star is a younger, fainter version of our sun, and is about 800 million years old — about the same age of our solar system when life first took root on Earth. Observations from NASA’s Spitzer Space Telescope show that the system hosts two asteroid belts, in addition to previously identified candidate planets and an outer comet ring. Credit: NASA/JPL-Caltech.

Finding Out Where We’re Going

When I first started thinking about unmanned robotic flight to a nearby star, my unexamined assumption was that any such probe would deliver the first data we had about the presence of planets in that system. But that was twenty-five years ago, and now we’re in the exoplanet era. We’re building equipment of such sophistication that we can talk about detecting exoplanets from the ground, and future space-based missions will certainly do spectroscopic analysis looking for biosignatures on interesting nearby worlds. And all this will happen long before a true interstellar probe can be built, so we have plenty of time to work with. Unlike Daedalus (whose team chose Barnard’s Star because of a mistaken detection of planets there), the Icarus team knows enough to keep the parameters tight and wait for more information.

Crawford’s money is on Alpha Centauri in the end, not only because of its proximity but because it’s not a single target but three (assuming a sufficiently ingenious mission trajectory), each of a different stellar class. As for me, I’ll agree with Crawford most of the way, though I still hedge my bets by keeping an eye on WISE and the possibility of a brown dwarf within three light years. The beauty of all this, as I said above, is that we’ll have hard answers very soon.