Keeping an Eye on Io

Suppose for a moment that you have some novel ideas about astrobiology on Io. The idea seems extreme, but there are scientists who argue for the notion, as we’ll see in a moment. In any case, if you wanted to observe Io, how would you go about it? The best solution is a spacecraft, as it was when Voyager 2 sped through the Jupiter system and discovered what tidal effects can do to a small moon. The Galileo probe, despite the failure of its high-gain antenna, was able to send up-close data about both Europa and Io, confirming that the latter’s volcanic activity was 100 times greater than what we experience on Earth. And then there was Cassini’s lovely view. 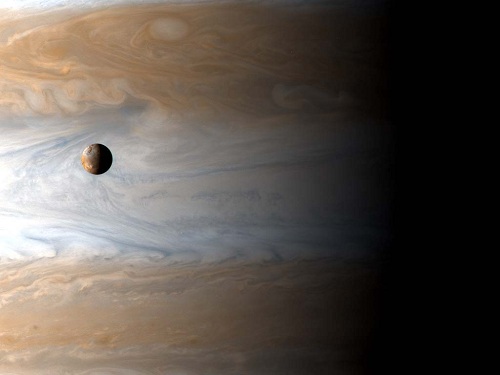 Image: Gliding past Jupiter at the turn of the millennium, the Cassini spacecraft captured this awe inspiring view of active Io with the largest gas giant as a backdrop, Credit: Cassini Imaging Team, Cassini Project, NASA.

But the Voyagers are now close to leaving the Solar System, while Galileo was sent to its destruction in the clouds of Jupiter back in 2003. Cassini is orbiting Saturn. Today, you’d have to rely on getting instrument time on the Hubble space telescope to follow-up your Io ideas. But we’ve just had word of a new adaptive optics technology that does Hubble one better. In fact, tests at the Large Binocular Telescope in Arizona have shown that the system — First Light Adaptive Optics, or FLAO — delivers image quality more than three times sharper than Hubble while using only one of the LBT’s two 8.4-meter mirrors. Add in the second mirror and this ground-based system is expected to achieve image sharpness fully ten times that of Hubble.

I share the excitement of Simone Esposito, the leader of a team from Italy’s Arcetri Observatory of the Istituto Nazionale di Astrofisica (INAF), which developed the system in collaboration with Steward Observatory (University of Arizona). Says Esposito:

“The results on the first night were so extraordinary that we thought it might be a fluke, but every night since then the adaptive optics have continued to exceed all expectations. These results were achieved using only one of LBT’s mirrors. Imagine the potential when we have adaptive optics on both of LBT’s giant eyes.”

Indeed. Using a secondary mirror that is pliable enough to be manipulated by actuators pushing on 672 magnets on its back, the technology seems to be a breakthrough in adaptive optics, taking us close to the point where we can see through the atmosphere as clearly as if it did not exist. You can see the results below:

Image: A double star as observed with the LBT in standard mode (left), and with the adaptive correction activated (right). Because of atmospheric blurring, the fainter companion of the star cannot be identified in the images taken in standard mode, while it is easily visible when the adaptive module is activated. A third faint star also becomes visible in the upper right part of the frame, thanks to the increased sensitivity of the telescope in adaptive mode. Credit: INAF/University of Arizona.

The revolution in ground-based astronomy that adaptive optics continues to foment is nothing short of breathtaking. Meanwhile, let’s back up a bit to that earlier comment about astrobiology and Io. Dirk Schulze-Makuch (Washington State University) made the case for astrobiology on the seemingly hostile world in a paper last year in the Journal of Cosmology. Io’s plasma particle interactions with Jupiter, its lack of a substantial atmosphere and its extreme temperature gradients all argue against life there. Nor do we see impact craters, indicating a malleable surface that is being constantly reformed.

But there is this to be said about the place: It formed in a part of the Solar System where water ice is plentiful and geothermal heat could have made the origin of life possible. We can imagine a scenario where water was lost on the surface and life went deep underground, where both water and carbon dioxide may still be plentiful. Schulze-Makuch’s view:

Geothermal activity and reduced sulfur compounds could still provide microbial life with sufficient energy sources. Particularly, hydrogen sulfide is probably a common compound in Io’s subsurface…. Volcanic activity is prevalent on Io and lava tubes resulting from that activity could present a favorable habitable environment. Microbial growth is common in lava tubes on Earth, independent of location and climate, from ice-volcano interactions in Iceland to hot sand-floored lava tubes in Saudi Arabia. Lava tubes also are the most plausible cave environment for life on Mars… and caves in general are a great model for potential subsurface ecosystems.

Underground microbial life on Io would, then, be protected from low temperatures and shielded from radiation, in an environment with both trapped moisture and nutrients like sulfide and hydrogen sulfide. Schulze-Makuch speculates that sulfur could play a large role here as a potential building block of life, noting that there is no evidence to this point for any organic molecules on Io and little hint of carbon of any kind. But it’s also worth keeping in mind that any organic molecules would be extremely difficult to find in Io’s atmosphere — they wouldn’t last long given the radiation environment at the surface. Energy, of course, is plentiful, and the author studies the possibility of chemical and magnetic energy’s role in astrobiology.

I’m not putting my money on Io as a home for life, and even Schulze-Makuch notes that the possibility has to be considered a long-shot. When we have exploratory robotic systems in Jupiter space again, Europa is obviously a much more likely candidate, and so, for that matter, is Ganymede. But a habitable niche in Io’s subsurface can’t be ruled out, even if radiation levels make shielding a robotic probe of the planet a dicey proposition. Until such a probe becomes possible, though, a clear view of Io with adaptive optics may be our best way to observe it.