Combining the assets of multiple telescopes in the technique known as interferometry has a long pedigree. Using a cluster of small telescopes rather than a single gigantic one is a way to achieve high resolution at sharply lower costs. Take a look at this list of astronomical interferometers working from the visible to the infrared and you’ll see how widely spread the technique has become as we’ve moved from earlier long wavelength observations (including the Very Large Array and MERLIN) toward optical installations and submillimeter interferometers and, now under construction, the Atacama Large Millimeter Array. 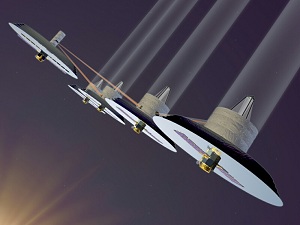 Observing Earth-like planets from space has often been studied in terms of a space-based array, with separated spacecraft operating in tandem, as in the infrared interferometer concept shown in this image (Credit: JPL). Both the now stalled Terrestrial Planet Finder and the canceled Darwin mission from ESA were looking at interferometry concepts that would have used a technique called nulling to reduce the light of a central star so that the planets orbiting it could be studied. New work may give these ideas renewed life and improve the concept.

For Stefan Martin (JPL) and A.J. Booth (Sigma Space Corp., Lanham, MD) have created a nulling interferometer that combines the light from four different telescopes to achieve effects no previous nulling techniques have been able to equal. Says Martin:

“Our null depth is 10 to 100 times better than previously achieved by other systems. This is the first time someone has cross-combined four telescopes, set up in pairs, and achieved such deep nulls. It’s extreme starlight suppression…And because this system makes the light from the star appear 100 million times fainter, we would be able to see the planet we’re looking for quite clearly.”

100 million times fainter is impressive indeed, and should be weighed against the fact that at infrared wavelengths, host stars can emit 10 million times more infrared than the terrestrial world being sought. The device, under study at JPL, is shown below. 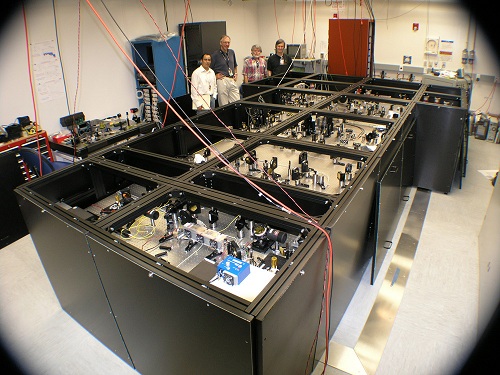 Image: From left to right: JPLers Felipe Santos Fregoso, Piotr Szwaykowski, Kurt Liewer and Stefan Martin with the nulling interferometer testbed at JPL, where the device is built and refined. Image credit: NASA/JPL-Caltech.

The ideal would be to find a terrestrial world circling a nearby star, one whose atmosphere we could hope to study with spectroscopic techniques, looking for the signatures of life. We have to find such planets first, of course, for of the 463 planets now known, none could support life as we know it. But this could change literally overnight as the three ongoing studies of Alpha Centauri A and B continue, with every prospect that we’ll have answers about planets there within the next few years. How Martin and Booth’s technique would cope with the tricky situation around the central binary stars there I don’t know, but rocky worlds around either of them would give even more impetus to the search for other ‘Earths’ in the interstellar neighborhood.