Knowing of my fascination with small red stars, a friend recently asked why they seemed such problematic places for life. M-dwarfs are all over the galaxy, apparently accounting for 75 percent or more of all stars (I’m purposely leaving the brown dwarfs out of this, because we’re still learning about how prolific they may be). Anyway, asked my friend, is it just that a habitable planet would have to be so close to the star that it would always present the same side to it? That’s tidal lock, and it looks as if it would play havoc with any chances for a stable environment. 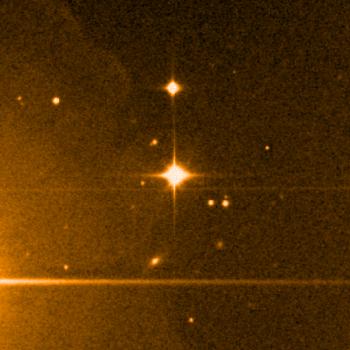 But maybe not. In the absence of observational evidence, we have to apply models to M-dwarf planets to see what might or might not work, and some very solid modeling out of NASA Ames back in the 1990s showed that there were ways an atmosphere could circulate so as to keep the dark side of the planet from freezing out its atmosphere. This work, by Robert Haberle and Manoj Joshi, was followed by Martin Heath (Greenwich Community College, London), who showed a viable mechanism for getting liquid water circulating between night and day sides. Tidal lock may not be a showstopper after all.

No, in recent times the rap against M-dwarf planets has been that their stars are prone to violent convulsions that launch potentially lethal flares into their planetary systems. Many M-dwarfs produce high energy charged particles and short-wavelength radiation from X-rays to ultraviolet. All of this activity can also affect a planet’s atmosphere, so that a key question becomes whether a planet in an M-dwarf’s habitable zone can retain its atmosphere, or whether terrestrial worlds would lose hydrogen and helium and gas giants would erode into Neptune-mass cores.

My friend and I kicked this around before parting company, he returning to studies unrelated to astronomy, while I returned to my office to find a message from Adam Crowl on red dwarfs and flare activity. A new study demonstrates that red dwarf planets may be shielded from these flares after all. As is standard practice in these matters, Antigona Sugura (Universidad Nacional Autónoma de México) and team went to work with computer models, simulating how a 1985 flare from the star AD Leonis would have affected an Earth-like planet orbiting it at 0.16 AU. AD Leonis is an M-dwarf about 16 light years from Earth, and 0.16 AU, about half Mercury’s distance from the Sun, is in the zone where liquid water could exist at the surface.

The results are promising. It turns out that in the simulation, bursts of UV radiation hitting an Earth-like atmosphere produced a thicker ozone layer, protecting the surface. From the preprint:

For an oxygen-rich, Earth-like planet in the habitable zone of an active M dwarf, stellar flares do not necessarily present a problem for habitability. Much of the potentially life-damaging UV radiation goes into photolyzing ozone in the stratosphere, preventing it from reaching the planetary surface. Ozone variations cause temperature fluctuations in the upper atmosphere, but these fluctuations are small, and the climate at the surface is unaffected.

In fact, in a feature on this work in Science, Lucianne Walkowicz (UC-Berkeley), a co-author of the paper, is quoted as saying “Throughout most of the flare, the surface of our model Earth-like planet experienced no more radiation than is typical on a sunny day here on Earth.” That’s good news indeed, for AD Leonis wasn’t chosen at random. At less than 300 million years old, it’s young and energetic, one of the most active M-dwarfs known, and the same article notes that the 1985 flare studied was 1000 times as energetic as a similar flare on our Sun.

Are we out of the woods? Not exactly. The paper goes on to note further problems:

Ionizing particles emitted during a flare may be more dangerous depending on how much of the particle flux strikes the planet. The additive effects of repeated flares over the duration of the planet’s lifetime are not well understood– as M dwarfs can be active on timescales of days to weeks, the atmosphere may not return to equilibrium before another flare occurs.

So there’s still plenty to think about regarding M-dwarf planets as abodes for life. But the coronal mass ejections and dangerous flares that characterize younger M-dwarfs don’t necessarily rule out life in the system, based on this work, and it’s also true that as these stars age, they offer lengthy lifetimes of up to 100 billion years (compared to a G-class star like the Sun, whose life will be around 10 billion years) during which life processes can emerge. That long, slow maturation is often accompanied by a decrease in problematic stellar activity.

The paper is Segura et al., “The Effect of a Strong Stellar Flare on the Atmospheric Chemistry of an Earth-like Planet Orbiting an M Dwarf,” accepted by Astrobiology and available online as a preprint. And in the ‘work remaining to be done’ category, note this sentence: “…there has not yet been a detailed, dynamic model exploring the
evolution of an Earth-like atmosphere over the course of a flare.”