The solar sail news continues to be positive, a welcome relief after so many years of delay and frustration. Now that we finally have an operational sail in space, it’s worth noting how the Japanese IKAROS sail differs from earlier sail concepts. For IKAROS is designed to use two kinds of power. The first comes from the momentum applied to the sail by photons from the Sun. The second (and this is just one of the areas where the Japan Aerospace Exploration Agency went in a new direction) is produced by the thin film solar cells built into the membrane of the 20-meter (diagonal) sail.

Remember that we’ve been getting helpful imagery from two cameras that separated from the spacecraft and looked back on its operations. The image shown later in this post was taken by the DCAM2 camera, a cylindrical device about six centimeters in diameter and height that was detached from the spacecraft by a spring, as was DCAM1. JAXA is continuing to measure the power generating capabilities of the solar cells, and intends to verify the acceleration by photon pressure as the mission progresses, all part of mastering the art of space sail navigation.

Addendum: Daniel Fischer, in the comments below this post, states that the camera used in the image below was DCAM1, and that the JAXA materials are mistaken (in the English version) in citing DCAM2.

The camera work helps us to check on the status of another mission concept. Interestingly, IKAROS is equipped with a liquid crystal technology that allows controllers to change the reflection characteristics on the sail surface by turning the power on and off. While the spacecraft carries a small engine to change the sail’s attitude, JAXA is also testing the liquid crystal devices to see whether the sail’s attitude can be changed without using propellant. Project leader Osamu Mori spoke about the technique in an interview published last year:

You can see the technique at work in the image below. 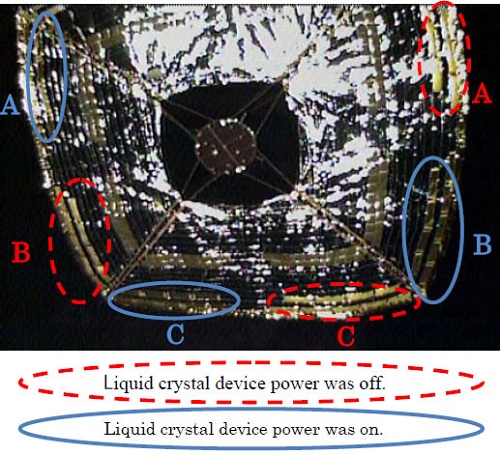 The image shows most of the IKAROS sail membrane. Notice the areas marked on the photo. According to JAXA, the sail attitude control experiment involves turning the power on the liquid crystal devices on and off in synchronization with the spin of the sail. The photo shows a preliminary experiment in which the power is switched on and off to show the difference — with the power off, the light is more diffusely reflected than when it is on, and the images become whiter. The areas enclosed in dashed red lines are powered off; the blue are powered on.

What we’re going to learn is how effective this technique is at attitude adjustment, a critical part of sail operation and navigation. The results will feed into the second IKAROS mission attempt, scheduled at the moment for late in the decade and involving a larger solar sail with a diameter of some 50 meters. IKAROS 2 will carry ion engines as well as the sail and will target Jupiter and the Trojan asteroids. But for now, we have plenty to learn as IKAROS continues on its trajectory into the inner system, where the solar cell technology will be thoroughly tested. These solar cells, after all, will be needed to supply power to the ion engines on the later IKAROS 2.

In further solar sail news, we have word that the Planetary Society’s LightSail-1, a solar sail built around Cubesat spacecraft, has passed its Critical Design Review in a two-day session in Pasadena. That means building the spacecraft’s hardware and software can proceed. Louis Friedman likens the 4.5 kg spacecraft’s technology to the miniaturization of computers within the last twenty years. In this Planetary Society post, he notes that the sail will be of 4.5 micron Mylar film, aluminized and seamed for rip-stop protection, with a total area of 32 square meters. All of this, Friedman adds, would fit inside a carry-on suitcase. He continues:

Each of these components represents advanced technology, but it is more than the manufacturing [of] the spacecraft that makes LightSail-1 a big undertaking. We also have required system engineering, integration, and testing, and the software programming of the circuit boards that serve as the spacecraft’s central computer. We will complete building the spacecraft by the end of this year, but — to increase our reliability and quality assurance — we have stretched out our integration and test schedule so that it runs into the first quarter of 2011.

Will we see a second solar sail in space by mid-2011? Much depends on launch options — LightSail1 requires a minimum altitude of 820 kilometers in order to escape any atmospheric drag effects — but we should see a firm launch decision within the next few months . By that time, too, JAXA should be well along in its acceleration and navigation tests and we will have accumulated a great deal of data about how sails perform in space. One lesson already being driven home is that solar sails, if they can successfully harness the Sun’s abundant photon output, will be an economical way to move payloads within the inner Solar System.