The planet known as TrES-2b is an interesting and useful place. Just over Jupiter mass, it orbits a solar mass star some 717 light years from Earth, a ‘hot Jupiter’ in a tight 2.47-day orbit. It’s also a transiting planet, discovered by the Trans-Atlantic Exoplanet Survey, which uses small, automated equipment and off-the-shelf technology to get the job done, feeding planet candidates to larger installations like the Keck Observatory and Palomar Observatory. But TrES-2b has a new and important distinction: It’s in the field of view of the space-based Kepler telescope.

Now we’re really in business. Exomoon-hunter David Kipping (University of London) said in a recent email that when this planet is viewed in ‘short-cadence mode’ with Kepler, it’s like seeing transits in High Definition. And indeed, that seems to be the case, as you can see in the diagram below. Kepler offers two measurement cadences: 1 minute cadence for up to 512 targets and a 30 minute cadence for up to 170,000 stars. In the early phases of the mission, short-cadence observations are reserved largely for astroseismology targets, but as planet candidates turn up through long-cadence observations, they can be put on short-cadence for better transit coverage.

Have a look at the image to see the difference between the short- and long-cadence lightcurves for TrES-2b. Click to enlarge the image: 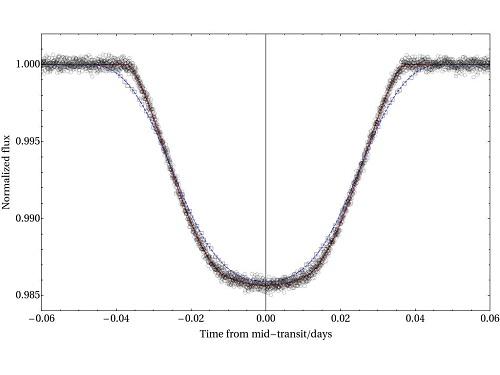 Working with Gáspár Bakos (Harvard-Smithsonian Center for Astrophysics), Kipping has produced a paper analyzing 18 short-cadence lightcurves of TrES-2b from Kepler, with that ‘HD’ quality he talks about producing ‘the most accurate determination of the transit parameters yet obtained for this system.’ Indeed, the photometry is exquisite, and the precision of the data may be the most outstanding result of our TrES-2b investigations to this point. I want to quote from Kipping’s email on this:

Although TrES-2b is found to be a fairly static system, the real result is the quality of the data which exhibits unprecedented quality – 230 parts per million (ppm) per minute – which is enough to detect a 6.5 hour transit (typical for a habitable-zone planet) with a noise level of 11.6ppm (so for signal-to-noise = 3 you could detect a 34.8ppm transit). This is actually above the design specification which was expected to reach 15.2ppm over the same time-scale for a star of this brightness. It translates to Kepler being able to detect planets about 13% smaller than the design specification.

TrES-2b now becomes the planet most closely studied for the possible presence of a satellite. The new work excludes moons between 0.25 to 3 Earth masses depending on the orbital configuration, a finding displayed in the chart below. Make no mistake about where this points — Kepler is now proven to produce data of sufficient detail to detect exomoons below Earth mass. And while TrES-2b hasn’t yielded one, this exciting paper tells us that we should be able to study habitable-zone Jupiters for exomoons that could potentially hold life. 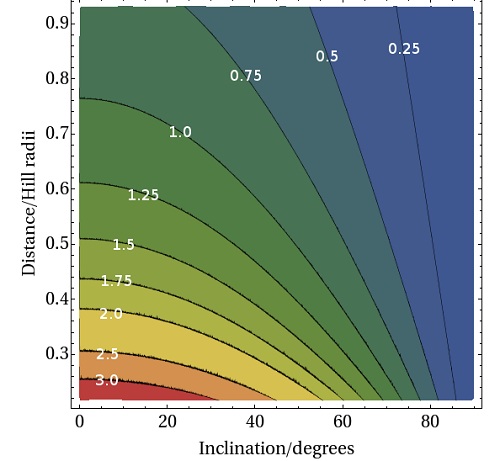 Image: Excluded exomoon masses for TrES-2b, as a function of the orbital distance of the moon around TrES-2b and the orbital inclination with respect to the observer’s line-of-sight. Contours are given in units of Earth masses. The Kepler data is able to easily probe down to sub-Earth mass exomoons. Diagram and caption: David Kipping/Gáspár Bakos.

The paper is Kipping and Bakos, “Analysis of Kepler’s Short-Cadence Photometry for TrES-2b,” now available as a preprint.