Centauri Dreams readers should know the name Stuart Atkinson, whose excellent Cumbrian Sky site I’ve linked to before. I don’t have many occasions to reproduce poetry in these pages (although I did quote some lines from Coleridge’s ‘Kubla Khan’ in honor of Huygens’ landing), but when I saw what Stuart had sent in to ESA’s Rosetta team, I knew I had to highlight it here. Rosetta’s encounter with the asteroid 21 Lutetia should bring out a bit of the poet in all of us, but Stuart nails what I felt:

For all these years you were merely
A smear of light through our telescopes
On the clearest, coldest night; a hint
Of a glint, just a few pixels wide
On even your most perfectly-framed portraits.
But now, now we see you!
Swimming out of the dark – a great
Stone shark, your star-tanned skin pitted
And pocked, scarred after aeons of drifting
Silently through the endless ocean of space.
Here on Earth our faces lit up as we saw
You clearly for the first time; eyes wide
With wonder we traced the strangely familiar
Grooves raked across your sides,
Wondering if Rosetta had doubled back to Mars
And raced past Phobos by mistake –

Then you were gone, falling back into the black,
Not to be seen by human eyes again for a thousand
Blue Moons or more. But we know you now,
We know you; you’ll never be just a speck of light again.

Nice. You’ll also find this poem at the Rosetta blog, where various photos of the encounter are reproduced, including this sequence of images before closest approach. 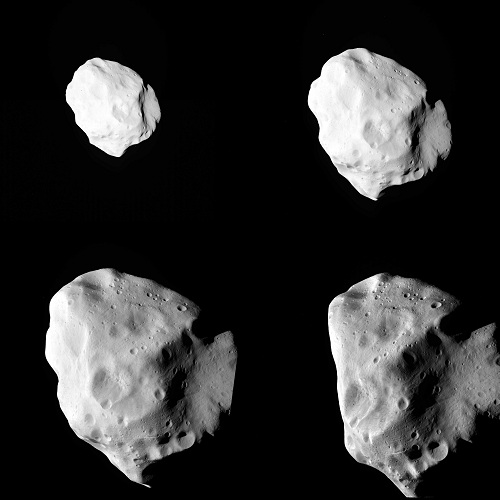 Stuart’s own take on the Lutetia imagery is here. See this ESA news release for still more imagery. But the image I like best is one taken by the OSIRIS Narrow Angle Camera from a distance of 36,000 kilometers. You can catch Saturn in the background, its rings faint but clearly visible. There is something magical about seeing one deep space destination in the background of a photograph of another. 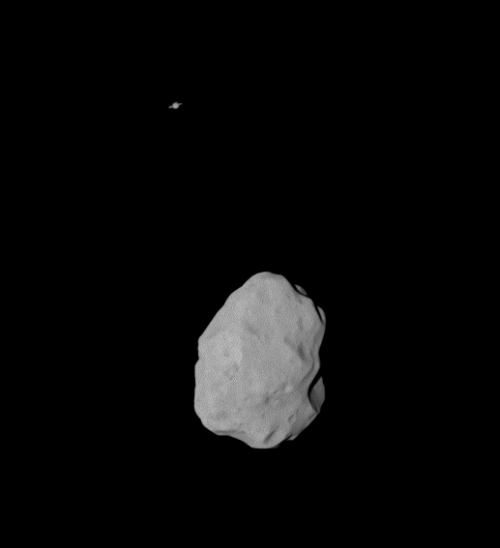 Rosetta passed the asteroid at a distance of some 3160 kilometers while moving 15 kilometers per second, something to keep in mind as you examine the clarity of these images. No wonder everyone associated with Rosetta is in a celebratory mood:

“Wunderbar!’ says David Southwood, ESA Director of Science and Robotic Exploration, “It has been a great day for exploration, a great day for European science. The clockwork precision is a great tribute to the scientists and engineers in our Member States in our industry and, not least, in ESA itself. Roll on 2014 and our comet rendezvous.”

Out of the encounter we should get a better estimate of the asteroid’s mass, take readings of the solar wind in its vicinity and better understand the properties of its surface crust. Thus the largest asteroid ever to be visited by a spacecraft, heavily cratered and marked by a deep bowl-shaped depression, will offer us insights into the rest of the main belt population while tantalizing us with the glimpse it provides of a remant from the Solar System’s earliest days. Analysis of Rosetta data should help us determine whether Lutetia is an ancient C-type asteroid or an M-type, the latter thought to be fragments of the cores of larger objects.

So it’s on to comet Churyumov-Gerasimenko for Rosetta, with rendezvous in 2014 and an eventual touchdown (on the 10th of November of that year) by the Philae lander. Splendid work by the Rosetta team. And splendid work, too, by Emily Lakdawalla, who got up an analysis of the close encounter photographs in a hurry on the Planetary Society blog. Emily congratulates the ESA operations and OSIRIS teams for their quick release of images, as do I.

I’ll close with another quote from Stuart Atkinson on the meaning of the Lutetia encounter:

…when you look at these images, you’re looking at pictures that are every bit as important as the first images of Yosemite Valley, taken by Charles Leander Weed in 1859, or the first pictures ever taken of Antarctica, or Everest or the ocean floor. They’re not pictures of something, they’re portarits of somewhere, somewhere new, proof that the desire, the need to explore, and see new places, is etched into our DNA like petroglyphs on a canyon wall.

And this final Lutetia image: 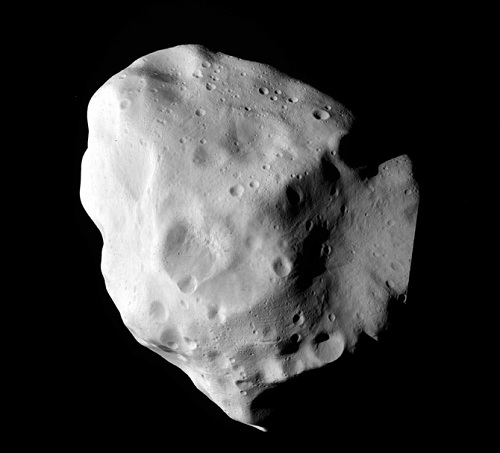