We learned in May that Jupiter’s South Equatorial Belt (SEB) had disappeared, an event that still has skywatchers puzzled, though it’s not without precedent. In fact, the SEB fades out every now and then, with recent fadings in 1989, 1993 and 2010, and we can expect an outburst of storms and vortices when the enigmatic belt returns, probably within the next two years, based on historical precedent. All of which puts the spotlight on Juno, a Jupiter mission intended for launch in August of 2011. Juno is all about the giant planet’s core, its magnetic field, its auroras and the amount of water and ammonia in its atmosphere.

Maybe Juno will tell us whether the disappearance of the South Equatorial Belt is the result of ammonia cirrus forming on top and hiding the belt from view. But there is much more to learn. Hydrogen gas deep in Jupiter’s atmosphere is pressed into metallic hydrogen, a fluid that acts like an electrically conducting metal and is thought to be the source of the planet’s intense magnetic field. Juno will, among other things, sample the charged particles and fields near Jupiter’s poles while observing the brightest auroras in the Solar System, caused by charged particles moving into the planet’s atmosphere.

For that matter, does Jupiter actually have a core? Juno should help us find out, pointing to one among two possible formation models. Either a massive planetary core formed early and captured Jupiter’s hydrogen and helium, or an unstable region inside the huge cloud of gas and dust from which our system formed collapsed to create the gas giant. Juno will measure Jupiter’s gravitational and magnetic fields by way of probing its interior structure.

A Hostile Place for Electronics

But what an environment to operate in. Scott Bolton (SwRI), Juno principal investigator, calls the spacecraft “an armored tank going to Jupiter,” a nod toward the protective radiation vault that will house its electronics, protecting these systems from the planet’s vast radiation belts, which circle the planet’s equatorial region and extend past Europa, some 650,000 kilometers from the cloud tops.

“For the 15 months Juno orbits Jupiter, the spacecraft will have to withstand the equivalent of more than 100 million dental X-rays,” said Bill McAlpine, Juno’s radiation control manager, based at NASA’s Jet Propulsion Laboratory in Pasadena, Calif. “In the same way human beings need to protect their organs during an X-ray exam, we have to protect Juno’s brain and heart.”

All that radiation is why a future human presence on a place like Europa is so deeply problematic. For Juno, Lockheed Martin Space Systems built a radiation vault out of titanium, each wall measuring close to a square meter in area, a centimeter thick and massing 18 kilograms each. Inside go the spacecraft’s command and data handling box, power and data distribution unit and numerous other electronic assemblies, with a total mass of about 200 kilograms. 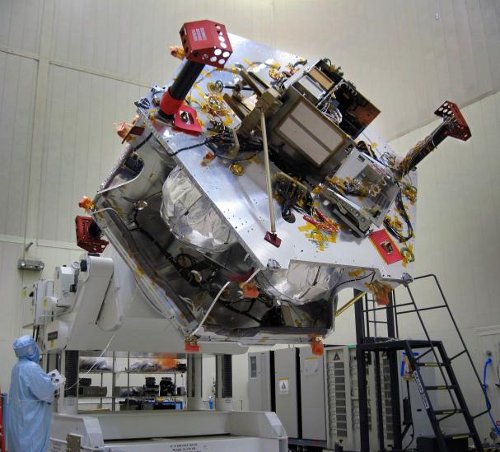 Image: Juno’s specially designed radiation vault protects the spacecraft’s electronic brain and heart from Jupiter’s harsh radiation environment. The vault will dramatically slow down the aging effect radiation has on the electronics for the duration of the mission. The image was taken on June 14, 2010, as Juno was being assembled in a clean room at Lockheed Martin Space Systems, Denver. Credit: NASA/JPL-Caltech/LMSS.

It’s going to be fascinating to see how this assembly does, but the Juno team also plans an orbit around Jupiter’s poles to lower the amount of time spent in the worst of the radiation around its equator. JPL has tested the vault in a high radiation environment, a lead-lined testing unit in which spacecraft parts were subjected to gamma rays from radioactive cobalt pellets. More tests await when the spacecraft is completely assembled — the vault is already on Juno’s propulsion module, with complete assembly to be accomplished next spring.

Future Mission to Ganymede and Europa?

Meanwhile, we can forget the image of the team in spacesuits drilling through Europa’s ice. This is one hostile environment for living beings as well as electronics, and unless we find breakthroughs in lightweight radiation shielding, chances are future Europa investigations will have to proceed with our machine proxies. Such proxies would be part of the proposed Europa Jupiter System Mission (EJSM), an international effort involving a Europan orbiter from NASA and a Ganymede orbiter built by the European Space Agency. The two craft would study both moons and return data on the entire Jovian system.

Can it be done? The mission is certainly feasible and it’s a candidate for a flagship mission. But Europa and Mars may conflict at a time when a major Mars sample return effort is also under consideration. We might be able to fund both missions, at the expense of a host of smaller yet worthwhile efforts, but we won’t know how the committee drawing up NASA’s mission goals (for the National Research Council’s Planetary Science Decadal Survey, 2013-2022) will come down on the matter until it makes its draft recommendations in late September.

My guess: We’ll get Europa and, depending on ESA’s decisions, Ganymede as well at the expense of the incredibly complex Mars sample return, a choice that will leave many unhappy, and one that highlights the steep financial constraints we labor under. But it will leave open the possibility of funding much less expensive Discovery-class and New Frontiers-class missions like Juno and New Horizons at the same time we explore Europa and Ganymede.