The exoplanet HD 209458b is the subject of such intense scrutiny that the discovery of a comet-like ‘tail’ is almost anti-climactic. After all, this transiting ‘hot Jupiter’ has given us plentiful information about its atmosphere (including the presence of a massive storm), and its tight orbit around its primary, orbiting that star in 3.5 days, would imply an atmosphere in continual turmoil. Now we learn that some of the atmosphere is indeed escaping into space, with the result that stellar winds evidently push the cast-off material into a long stream behind the planet. 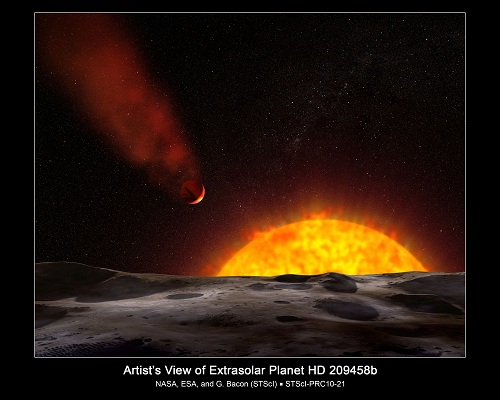 Jeffrey Linsky (University of Colorado in Boulder) explains the observations:

“Since 2003 scientists have theorized the lost mass is being pushed back into a tail, and they have even calculated what it looks like. We think we have the best observational evidence to support that theory. We have measured gas coming off the planet at specific speeds, some coming toward Earth. The most likely interpretation is that we have measured the velocity of material in a tail.”

The observations were made with the Hubble Space Telescope’s Cosmic Origins Spectrograph, which revealed carbon and silicon in the atmosphere, an indication that heavier elements are being heated and are escaping from the planet. As a large portion of the escaping gas was flowing at the same speed (some 35,000 kilometers per hour), the presence of the comet-like tail seems a reasonable conclusion. The work confirms earlier observations by Hubble’s Space Telescope Imaging Spectrograph from 2003, which showed an evaporating atmosphere and suggested a comet-tail structure as a possibility.

There have been a number of papers in the past few years looking at how a gas giant close to its star loses mass and investigating the lifetime of such a world, and in fact the first suggestion that such a planet would have a comet-like tail goes back to 1998. The researchers conclude in the paper on this work that the mass-loss rate in the planet’s outflow is in a range of (8-40) x 1010 g s-1, a formidable flow but one that would take, according to Linksy, a trillion years to cause the planet to evaporate. HD 209458b, some 153 light years from Earth, will be around for quite a while, and this usefully transiting world doubtless has much more to teach us.