The WISE mission completed its first survey of the entire sky on July 17, generating more than a million images, of which one of the most beautiful is surely the image of the Pleiades cluster below. We’re looking in the infrared at a mosaic of several hundred image frames with the combined light of WISE’s four detectors working in a range of wavelengths. The cluster of stars in seen in a dense latticework of dust in an area covering seven square degrees, equivalent to about 35 full moons. 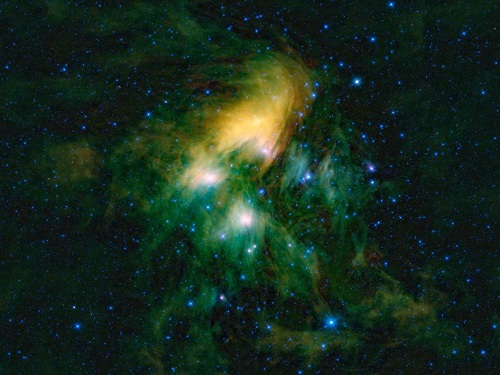 Image: In this infrared view of the Pleiades from WISE, the cluster is seen surrounded by an immense cloud of dust. When this cloud was first observed, it was thought to be leftover material from the formation of the cluster. However, studies have found the cluster to be about 100 million years old — any dust left over from its formation would have long dissipated by this time, from radiation and winds from the most massive stars. The cluster is therefore probably just passing through the cloud seen here, heating it up and making it glow. Credit: NASA/JPL-Caltech/UCLA.

In addition to sights like these, WISE has thus far rung up 100,000 asteroids, 25,000 of which were previously undetected. Because Centauri Dreams readers have been concerned about data release (after our discussions of the Kepler policy on these matters), it’s worth noting that the first release of WISE data covering some 80 percent of the sky will be offered in May of next year. WISE goes on to map half the sky again, operating until its solid hydrogen coolant runs out. An extension to the mission using two infrared wavelengths without coolant hasn’t been ruled out.

And as we wait for possible brown dwarf detections, the recent paper by Adrian Melott and Richard Bambach comes to mind. You’ll recall in our discussion of the paper that the researchers found a repetitive 27-million year cycle in extinction events going back some 500 million years, and argued that this weighed against the idea of a dark companion to the Sun (‘Nemesis’) because the orbit of the latter object would be more variable than the extinction cycle. Comments here and on other sites make it clear that the 27-million year cycle may not be as robust as the authors believe, leaving the status of a dark companion unresolved.

Will WISE find a brown dwarf or a gas giant somewhere in the Oort Cloud? Let’s hope the data the mission produces either finds the object or puts ‘Nemesis’ to rest.

Tau Zero practitioner Pat Galea will be presenting a paper at the upcoming Second International Symposium on Solar Sailing (ISSS 2010), which convenes at the New York City College of Technology of the City University of New York tomorrow. A member of the Project Icarus team, which is at work designing a fusion-based successor to the Project Daedalus design, Pat will be examining the possible uses of solar sail technology in the mission. How to combine fusion and sail? Here’s the abstract:

Project Icarus is an in-depth theoretical engineering design study of a mission to another star, following on from the historically successful Project Daedalus. While the terms of reference for the project specify that the spacecraft propulsion system will be mainly fusion-based, aspects of the mission and overall architecture could be implemented or assisted by the use of solar sails. This discussion paper gives a brief overview of the aims of Project Icarus, and examines the potential application of solar sails in several areas of the mission. This includes: assisted boosting of the Icarus probe out of our solar system; deploying sub-probes in the target solar system for exploring local planets and other objects of interest; deploying a relay station at the Sun‘s gravitational focus to receive transmissions from the distant Icarus craft. This paper discusses some of the engineering requirements for these potential roles as well as any potential performance enhancements to the mission.

You’ll find the full program for this timely meeting online. I call it timely because of the recent success of JAXA’s IKAROS sail and the upcoming LightSail mission sponsored by the Planetary Society. JAXA’s Osamu Mori, project leader for IKAROS, will be a speaker at the session, as will the Planetary Society’s Lou Friedman, along with sail luminaries from ESA and NASA. Have a look at the program to see how rich this conference should be. I hate to miss any of it, but will particularly regret not hearing Ed Belbruno, Les Johnson, Roman Kezerashvili and Greg Matloff.

Calendar watchers will also note that the International Astronautical Congress 2010 is coming up this September in Prague, during which meeting Pat Galea will be discussing the possibility of using gravitational lensing for communications with an Icarus-style craft. I’ll publish the abstract to that talk as we get closer to the event, but I do want to note that Tau Zero founding architect Marc Millis will be presenting four papers of his own in Prague as part of a robust Tau Zero presence at the meeting (I know Claudio Maccone is going, as is Tibor Pacher, and I’m sure Greg Matloff will be in attendance along with a number of Project Icarus team members including Kelvin Long).

Farside Protection at Ames (and a Lensing Find)

Speaking of Claudio Maccone, the good doctor tells me in a recent email that he will be discussing lunar farside protection this Tuesday at NASA Ames. You’ll recall our recent examination of creating a ‘quiet zone’ on the farside that would keep the area pristine for radio astronomy and SETI work. Maccone is suggesting that the 80-kilometer Daedalus Crater would be an ideal location for a scientific installation, shielded from Earth-made radio pollution. His talk is part of the 3rd annual NASA Lunar Science Forum, which runs through the 22nd at the NASA Ames Conference Center.

Thoughts of the FOCAL mission to the Sun’s gravitational lens are never far when discussing Claudio Maccone, and the recent news out of Caltech and the Ecole Polytechnique Federale de Lausanne (EPFL) instantly caught my eye. Researchers have found the first known case of a distant galaxy being magnified by a quasar acting as a gravitational lens. We know about hundreds of gravitationally lensed quasars, magnified by a foreground galaxy, but this is the first example of a background galaxy lensed by the host galaxy of a foreground quasar. 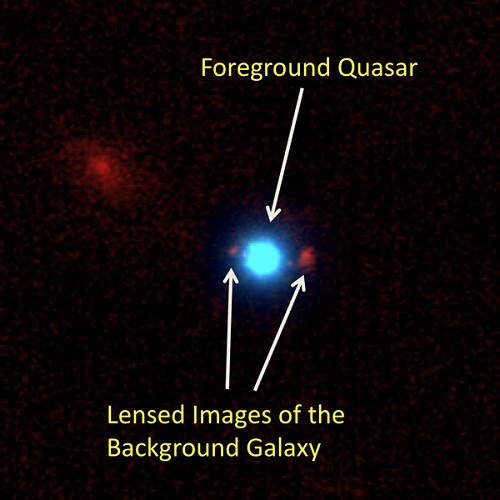 I also found the lensing diagram available via Caltech to be helpful:

This ‘reverse lensing’ is extremely useful because quasars, thought to be powered by supermassive black holes in the centers of galaxies, can be a thousand times brighter than the galaxy in which they are embedded. That makes studying the host galaxies quite difficult — EPFL’s Frederic Courbin likens it to staring into car headlights and trying to figure out the color of their rims. But lensing, he adds, changes things: “We now can measure the masses of these quasar host galaxies and overcome this difficulty.”

If quasars are a useful probe of galaxy formation and evolution, as Caltech’s S. George Djorgovski says in this news release, the lensing method itself is away of probing distant astronomical objects as well as those closer to home. Maccone’s FOCAL mission would use the Sun’s gravitational lens at 550 AU to study a variety of astrophysical issues, and could conceivably be used for close study of nearby solar systems. More exotic applications in SETI and, as Pat Galea will describe at the IAC, in communications, may well follow.